Why Diversity and Inclusion Matter 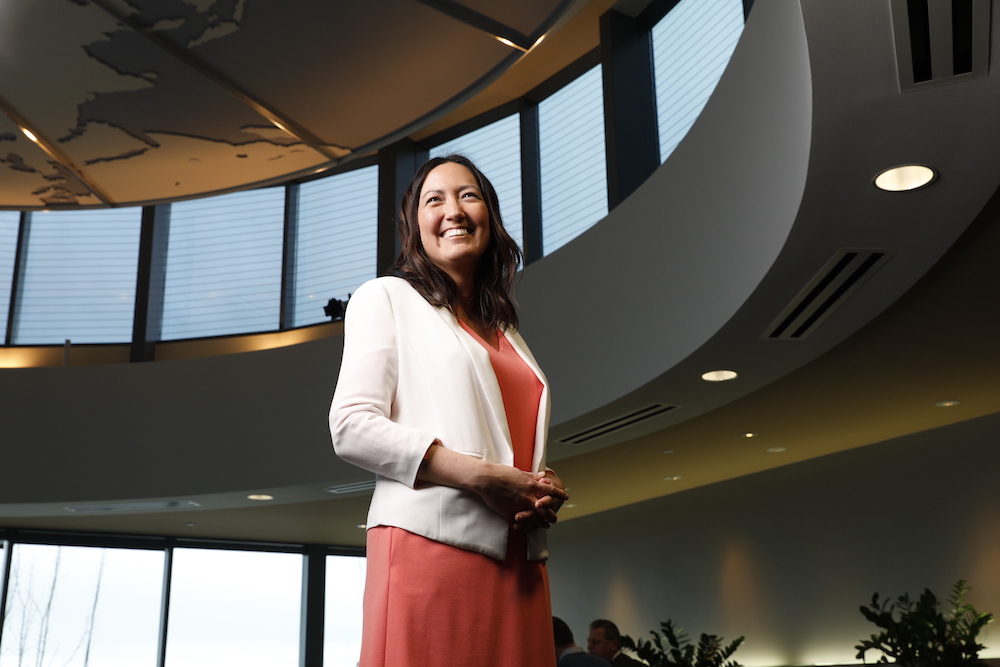 This article is featured in the January issue of Seattle Business magazine. Subscribe here to access the print edition.

When the nation exploded in protests over the killings of Breonna Taylor and George Floyd last summer, World Trade Center Seattle Director Emily Cantrell went straight to her boss.

She recalls a passionate, heart-to-heart conversation about racism with Columbia Hospitality CEO John Oppenheimer. As a result of their honest exchange, Columbia which manages World Trade Center Seattle and around 60 other hospitality-focused properties launched its first diversity, equity and inclusion task force. The new group changed Columbias value statement to add inclusivity and drew up a list of 70 ideas that would improve DE&I practices, some of which it had already begun work on. Cantrell says the conversation is one that every workplace needs to have.

This is not a political issue, Cantrell says. Its a humanity issue.

Columbia Hospitality is one of a growing number of Seattle-area companies taking steps to improve diversity, equity and inclusion practices. Multiple organizations have reached out to Cantrell to ask her for guidance. Local DE&I consulting firms, including TADA Partners and The Diversity Center of Washington, have also seen increased inquiries in the past six months.

Companies are compelled to ensure that their audience and the world know where they stand on these social justice issues, says Tara Buchan, chief strategy officer for TADA Partners.

Amazon now has more than 150 DE&I officers around the world. Elizabeth Nieto, Amazon global head of DE&I, says the nationwide outcry and protests last summer accelerated many of its plans, from diversity in hiring to internal communication and practices. Some large local firms are now asking for detailed data on staff diversity statistics when receiving requests for proposals, as Seattle law firm Stokes Lawrence noticed recently when bidding on a contract with Bellevue-based T-Mobile.

DE&I hiring reflects societys growing consciousness of diversity issues. Though job listings dipped in the first part of 2020 due to the pandemic, DE&I job posts nationwide rose by 55% during the summer, according to data from recruiting site Glassdoor. As of October, job boards showed local DE&I positions from companies ranging from the Bill & Melinda Gates Foundation, Fred Hutchinson Cancer Research Center, Rover and Redfin. Even industries that have typically been dominated by one gender or racial group are considering hiring practices to increase diversity.

A survey by talent acquisition software firm Yello found that nearly two-thirds of job candidates say a companys diversity and inclusion initiatives are an important factor when deciding whether to accept an offer. Management consulting firm McKinsey & Co. says, the business case for inclusion and diversity is stronger than ever, adding that businesses with ethnically diverse executive teams are more profitable.

Technology and engineering have typically been made up of white males, but I think its starting to change, says Kim Kearns, professional services director, open data and development, for Seattle spatial technology firm Critigen. In all industries, people are starting to wake up.

To be sure, true corporate change in diversity and inclusion requires more than a token hire or a newly formed committee. DE&I consultants say that for any change to be meaningful and lasting, companies must invest financially in ongoing efforts. In addition, senior leadership needs to be involved, and DE&I must be a part of the companys public mission or value statement.

If those three things arent in place, nothing happens, says Jean Craciun, founder and CEO of The Diversity Center of Washington. Companies cant just check a box or give lip service.

Some businesses are demonstrating financial commitment by hiring leaders in permanent DE&I roles. In late October, law firm Davis Wright Tremaine brought on Yusuf Zakir as its first ever chief diversity and inclusion officer. In his new job, Zakir is developing a strategic DE&I plan across all eight Davis Wright Tremaine offices. Zakir sees the role as significant because he is part of the executive leadership team and works directly with the managing partners.

When you are part of the leadership team, you are able to directly create change within an organization, Zakir says.

One of the major problems DE&I leaders like Zakir must address is how their companies recruit and retain a diverse pool of employees. After launching its DE&I task force this fall, Columbia Hospitality changed its hiring practices to remove names and photographs from resumes. The company also removed any degree requirements from job listings and looked at expanding its geographic base when recruiting candidates.

Stokes Lawrence has addressed diversity in recruiting in part by creating internships and mentorships for young lawyers in training. The firm gives scholarships to first-year minority law students at the three law schools in Washington. This year, Stokes Lawrence became a sponsor of the Gregoire Fellows Program, which will provide the firm with a sum-mer intern who is a minority law student. The law firm also offers summer internships for high school students of color through the Rainier Scholars program. It hired two former interns into permanent positions.

Companies must consider how minorities advance within their firms as well. Columbia Hospitality has been working on how to increase diversity at upper-level management. Among all Columbia Hospitality employees, 40 percent are racial minorities, but that number drops to 20 percent for directors and zero among the executive team. Cantrell believes changing the leadership makeup will require consistent effort and financial commitment.

We need to be in this for the long haul, Cantrell says.

The Stokes Lawrence leadership team encourages employee growth by asking everyone to develop a vision and plan for where they want to take their career, regardless of their position or seniority. That way, every individual is empowered to think about personal advancement, not just those who happen to have access to mentors or other advantages.

Marketing is another area where diversity and inclusion matters. Columbia Hospitality went through all of its property websites and changed photographs to include people of diverse backgrounds. It also created a new internal calendar that includes holidays and days of awareness reflecting all cultures and religions.

Visit Seattle, which worked with The Diversity Center of Washington, began changing how it promotes the city to locals and tourists. Last fall, Visit Seattle released its Do Something campaign, which encourages Puget Sound-area residents to support local businesses. Among those included in a video were Beacon Hill minority- and woman-owned restaurant Musang, Renton minority-owned hair salon Mr. Naturalz and Kent woman- and minority-owned KJs Cakery Bakery.

Visit Seattle, which serves as the citys tourism and marketing agency, has also launched a number of promotions and marketing materials geared toward LGBTQ people, including a Marry Me campaign for same-sex couples and events surrounding Pride. The Visit Seattle website now includes a section supporting Black Lives Matter. Tom Norwalk, president and CEO of Visit Seattle, says he and his colleagues want to align themselves with organizations that are dismantling systemic racism.

We were all awakened during Black Lives Matter and we have to rethink what we are doing, Norwalk says.

Though DE&I work has become a priority for many businesses, the ongoing global pandemic has presented additional challenges. Hospitality companies such as Columbia Hospitality and Visit Seattle have furloughed many of their employees, making diversity hiring and recruitment difficult. Even those firms that havent seen a major financial hit from the pandemic are contending with the reality of their employees working from home, which provides less opportunity for the social connections that can make someone feel included.

A lot more intentionality is required because you dont bump into someone in the halls anymore, Zakir says.

While the pandemic sets many obstacles to DE&I goals, the racially charged events of 2020 have advanced real conversations in the office. Zakir has witnessed coworkers and others in the legal industry more willing to honestly discuss issues of equity and race in the workplace and in their own lives.

Kelly Noonan, managing shareholder at Stokes Lawrence, said although the firm has had a diversity and inclusion committee for 15 years, the recent protests created a greater sense of urgency. Employees expressed interest in educating themselves on racial inequality. They formed a book club, choosing White Fragility as their first read.

I think people are really serious about wanting to change things and realizing they cant just count heads without thinking about the cultural process, Noonan says.

Many DE&I leaders stress how intensely personal the conversations have become. After forming their DE&I council, Critigen staff members drew up an agenda for the first Zoom meeting. Instead of following the plan, participants spent two hours talking about their personal experiences with race, gender, diversity and equality.

I dont think Ive ever experienced something so moving or eye opening, says CEO Jeff Haight.

Zakir notes many DE&I professionals like him are drawn to the field because of their personal experiences. Zakirs parents immigrated to Canada from East Africa, and he was the first in his family to pursue a professional career. He found the law profession overwhelmingly white. He hopes his work can help other minority lawyers feel included.

Its not easy oftentimes being the only person of color, Zakir says. The feeling you dont belong can be an overwhelming feeling.

Many Seattle companies still lack racial diversity, but some note progress in gender equality. Stokes Lawrence is one of the largest women-owned law firms in the nation. Of its 25 equity owners, 14 are female. Noonan says the firm recruits so many women because it has reached a critical mass that influences the feel and tone of the company.

We are definitely an outlier and we are really proud of that, Noonan says. We dont have to work hard to be a magnet for super-talented women lawyers because thats been true of our firm for many years.

Racial diversity, on the other hand, has not reached critical mass. The firm has a DE&I committee that has been working to attract more people of color to the firm and help them advance through the ranks.

The demographic challenges are similar at Visit Seattle, which is dominated by women but lacking minorities and people of color.

Though the pandemic has put a halt on any recruiting, Norwalk notes the organization continues to have internal conversations on how to encourage inclusivity and openness.