Sea Change: Aquarium Expansion Will Bring the Wonders of the Deep Sea to Seattle’s Waterfront 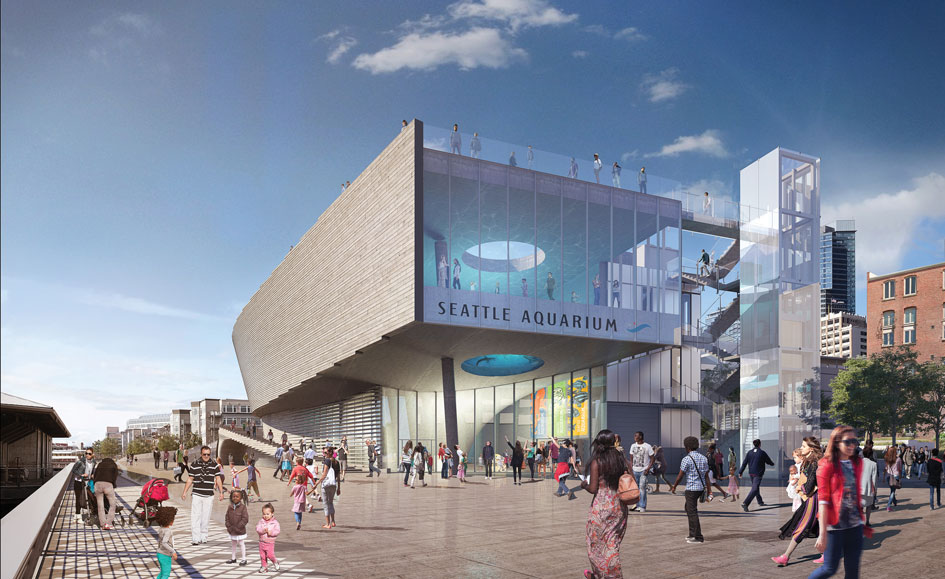 From the rooftop of the Seattle Aquariums new Ocean Pavilion, visitors will look out toward Puget Sound and the Olympics, back toward Pike Place Market and the city skyline, and down into a 350,000-gallon shark tank.

Thats right. A shark tank. One that visitors to the waterfront can observe without ever entering the aquarium.

Boosters believe the dramatic vistas and daring design of the Ocean Pavilion will make the aquarium one of Seattles must-see attractions, along with the Space Needle and Pike Place Market, and brand Seattle as a global leader in marine conservation efforts. The building is slated to open in 2023 as part of the citys ambitious new waterfront. With the Alaskan Way Viaducts demolition, the waterfront will be transformed into a 20-acre urban park, and the Ocean Pavilion will become the centerpiece, occupying the most prominent spot.

The Ocean Pavilion will be at the crossroads of the city, says Bob Davidson, Seattle Aquarium president and chief executive officer. Its a gift, and its also a statement of the importance of Seattles relationship to the water and the ocean.

For locals underwhelmed by todays cramped aquarium, and by a waterfront largely occupied by trinket shops and tourist traps, the upcoming overhaul will be stunning. The Ocean Pavilion and waterfront park will bring bold new architecture, large outdoor gathering spaces and a connection to Puget Sound that hasnt existed since the viaduct was constructed in the 1950s.

The new waterfront is as significant as Central Park is in Manhattan, says Mark Reddington, a partner with LMN Architects and the architect for the Ocean Pavilion. It will be one of the biggest transformations in Seattles history.

Aquarium supporters estimate the Ocean Pavilion and revamped waterfront will help draw 1.2 million visitors a year to the aquarium, up from 850,000 today. The larger waterfront should see even more growth.

In 2017, Waterfront-traffic guest counts were estimated at 6.9 million by the Historic Waterfront Association. Projected growth is between 14 million and 21 million guests by the time Overlook Park and the Aquarium expansion open.

The Ocean Pavilion will not replace the existing aquarium on Pier 59 and 60, but instead provide new space to showcase the changing oceans of the world. Exhibits will focus on the Coral Triangle, an endangered area of the Pacific Ocean near Indonesia known for sea-life diversity. The Ocean Pavilion will show the link between the local waters of the Salish Sea and the wider Pacific, both of which are contending with pollution and acidification from rising carbon dioxide emissions. Just as orca whales are suffering in the Pacific Northwest, sharks are struggling in the Coral Triangle.

The health of our oceans is severely threatened, Davidson says. We have a role in educating people on these issues, and in particular educating young people.

Aquarium leaders believe that a more prominent building focusing on ocean health will showcase Seattle as an international center for marine research and conservation efforts. Local groups studying oceans include the University of Washington College of the Environment, the National Oceanic and Atmospheric Administration and a number of nonprofits. Aquarium scientists have 13 ongoing research projects at 39 sites in Washington waters. They monitor sea acidification, rock fish populations, sea otters and other marine life. The Ocean Pavilion will highlight local and international ocean research.

Seattle is known as a center for world health, but we also want to be a center for ocean health, Davidson says.

The ambitious aquarium expansion will require an equal split of public and private funds. The plans include not only the Ocean Pavilion, which is expectd to cost $100 million to $120 million, but also renovation of parts of the existing aquarium on Piers 59 and 60. The east half of Pier 59, which includes the aquariums main entrance and lobby, was renovated in 2007. That project added a gift shop, cafe, meeting and event space, and a 120,000-gallon exhibit near the front entrance.

After the Ocean Pavilion is completed, the west half of Pier 59 will be tackled in a $65 million remodel. The project will include opening the end of the pier to Puget Sound views. Currently, visitors dont see the water outside the aquarium, as storage space takes up the end of the historic pier building. West aquarium renovations also will expand the education center and conservation programming.

Next up after the main building renovation is a $140 million renovation of Pier 60, which houses birds and mammals. The project will include new and expanded marine mammal, shorebird and Puget Sound fish exhibits, additional learning spaces and structural enhancements.

According to Davidson, the idea of a larger aquarium has been discussed since the facility first opened in 1977 as a city of Seattle-run facility. In the late 1990s and early 2000s, a plan was developed to build a new aquarium on the empty Piers 62 and 63 just north of the existing facility, but the funding never materialized. For a new aquarium to gain momentum, the organization needed to change from within, Davidson explains.

We had to make the aquarium credible, so it could happen, Davidson says.

In 2010, the nonprofit Seattle Aquarium Society assumed management of the aquarium from the Seattle Department of Parks and Recreation. The new managing entity enabled the aquarium to form a more powerful board, sharpen its core mission to inspire conservation efforts and raise funds for an expanded facility.

With its current footprint on the two piers, the aquarium has long been dealing with space limitations. Last year, the facility had 47 days at peak capacity. The viaduct demolition and park planning process provided an obvious time to push forward plans for a larger facility. Construction of the 48,000-square-foot Ocean Pavilion will begin in 2021 and take two years. The building will sit just northeast of the existing aquarium, on land last occupied by a parking lot and a small law office. Directly above the planned building is the Pike Place Market, and a park-like staircase dubbed the Overlook Walk will connect the two.

Aside from the existing piers, the Ocean Pavilion will be the only building to the west of the new waterfront surface street. The location signals the aquarium as a building of importance to the city, Reddington says.

Models and drawings of the Ocean Pavilion show a building that reflects nature and the sea. From the west side, the Ocean Pavilion and Overlook Walk are composed of soft curves and wave-like walls, resembling the natural elements of the seashore.

The design needs to live up to that ambition, Reddington says. Its all about a gesture to the water and the shore.

The east side, which faces downtown Seattle, forms a linear urban facade. That side of the building houses some Aquarium staff and includes animal-care rooms. Large, south-facing windows inside the Ocean Pavilion will allow visitors to gaze out at the waterfront and Mount Rainier. Though much of the west-facing wall will not be transparent to allow light control for the animals, window lookout points scattered throughout the building will enable visitors to see west as well.

Davidson believes the rooftop views will be among the most spectacular in the city and a gathering point akin to Kerry Park on Queen Anne Hill. Because of the buildings unique waterfront positioning, visitors can gaze out at Puget Sound and then turn around and take in the city skyline. The top of the Ocean Pavilion will offer the same view.

The roof will provide a new way to see Seattle, Davidson says.

The Ocean Pavilion also will allow the public to glimpse sea life without paying for aquarium admission. When walking along the waterfronts new park promenade, visitors can pass right under the pavilion and look up into a tank filled with five different species of sharks, rays, and other reef species. People also will be able to peer down into the tank from the Ocean Pavilions roof.

This building is going to be architecturally profound, says Martha Kongsgaard, co-chair of the Seattle Aquarium One Ocean, One Future campaign. For people who get off cruise ships, and for families walking by, theyll look up in awe into these blue waters and think what a marvel this planet is.

In addition to providing a dramatic architectural statement from below and above the building, the tanks windows match the Aquariums broader conservation goals. Aquarium leaders believe that the more people who become interested in marine life, the more they will care about protecting the Earths oceans. The potential to influence many more visitors exists because the Ocean Pavilion occupies such a prominent piece of land on the new waterfront.

This very valuable piece of real estate could have gone to the highest bidder. Its really the crown jewel of the waterfront, Kongsgaard says. The city instead made a statement on our values, to re-establish our relationship with the water.

Inside the Ocean Pavilion, guests will learn about the endangered coral reefs and sea life in the Coral Triangle. Aquarium researchers traveled to Indonesia in the spring of 2018 and then again this spring to visit with local groups who could become partners. Through meetings with local community leaders, Indonesian nonprofits and international nonprofits, theyve learned about the challenges Indonesians face due to climate change.

The Coral Triangle is the Amazon of the ocean, says Dr. Erin Meyer, director of conservation programs and partnerships for the aquarium. Its the center of biodiversity, and its the heart of where a lot of these global changes are taking place.

Aquarium staff members hope the Coral Triangle partnerships will influence Ocean Pavilion exhibits and help convey the ocean conservation message to the public. The new building is designed with four main areas. A central gathering space will feature changing multimedia exhibits and serve as an event space for up to 200 people an important element that will help sell the aquarium and its unique space as an essential Seattle experience, Davidson says.

The massive shark tank, dubbed the Coral Canyon, highlights the importance of predators in a healthy marine ecosystem. With gentle curves and a soft geometry, the exhibit allows sharks to move naturally. The curves also enable guests to peer into the tank from opposite sides of the Ocean Pavilion without seeing each other.

We want people to have the experience of being immersed in this water, says Susan Bullerdick, capital projects director for the aquarium.

The tank is shaped like a martini glass, narrowing down to a smaller area for coral-dwelling fish in the bottom. Since real coral requires lots of light to thrive, it will not exist in the shark tank but will instead be seen in a separate exhibit. This area, called the Archipelago, also features mangrove habitats and sea grass.

Another part of the Ocean Pavilion, At Home in the Ocean, will teach guests about the Pacific Ocean. It includes areas where people can observe aquarium researchers at work, animal care, and coral and jellyfish growing. The transparency will give visitors a bigger picture of how the aquarium operates.

Aquarium supporters believe the opening of the Ocean Pavilion will drastically alter the visitor experience for tourists and locals alike.

I think this will kick off a new era for the aquarium, Kongsgaard says. Right now, its on trinket row, cut off from the city by the viaduct. Every aquarium has its evolution, and our time is now.