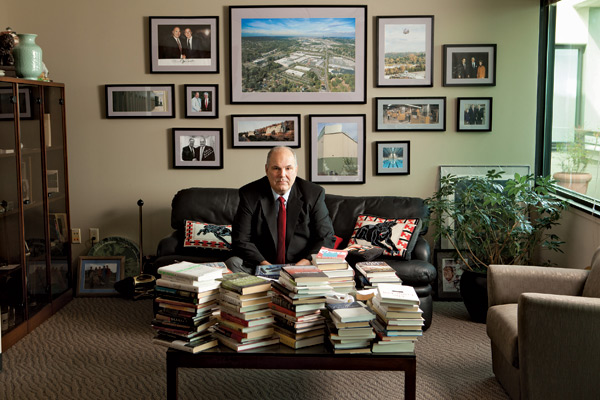 When the dot-com bubble burst in 2001, it seemed to many observers that David Sabey was in deep trouble. After all, his real estate business, Sabey Corporation, had invested heavily in costly buildings to house the computers and communications systems that were driving the internet revolution. Among its largest tenants was Exodus Communications, a rapidly growing California startup. Exodus hosted websites for many of Seattles internet startups and was now filing for Chapter 11 bankruptcy protection.

Sabey had accepted stock in Exodus as partial payment for the heavy cost of converting a building originally developed for Boeing into a structure appropriate to house Exodus computer and communications equipment. The stock, which exploded in value when Exodus went public in 1998, was now worthless. And Exodus was just one of many technology firms that were forced to break their leases, leaving Sabey with buildings full of rapidly depreciating computers.

Today, Sabey is a national powerhouse in a data center business that is growing quickly with the popularity of cloud computing. Companies either move their computers to these centers, which typically offer backup power, proper air conditioning and various security measures, or use the massive data centers of cloud computing giants like Amazon, Microsoft or Google.

Sabey Data Centers, a Sabey affiliate, has found itself well positioned in that sweet spot. It manages or has under development more than 3 million square feet of building space specifically built to house data centers. Those centers represent 65 percent of the value of a Sabey enterprise currently worth more than $600 million. Last June, Sabey paid $120 million for a windowless Verizon building in lower Manhattan; the site will likely prove to be the citys largest special purpose data center.

For Dave Sabey, CEO and founder of Sabey Corporation, success with the data centers has revitalized his reputation as an astute developer with a penchant for making smart bets. Dave is a risk taker, but he is not a fool, says Blair Bernson, a realtor with the Washington Advisory Group. There is always a profitable angle to every gamble he takes.

Adds Jim Harding, a former Amazon.com vice president of technology who joined Sabey as chief technology officer in 2010: Dave has an uncanny grasp of the opportunity presented by emerging trends, along with a focus on total project execution.

Sabeys is the story of a man who never sees a glass half empty. He was born and raised in Tukwila and, at 65, he still has the broad shoulders he developed as a reserve lineman for the University of Washington football team. You could tell the linemen by how dirty their uniforms were and by the chips on their helmets, Sabey recalls fondly. He says his task as a lineman was to clear the way so other players could find opportunities to run the ball. Thats the role he sees for himself as an owner and manager: providing the capital and the tools for others to exploit business opportunities.

Sabeys remarkable career began in 1971, when he acquired a business that designed and installed wood roof systems, a company for which hed been working as a manual laborer. When the economy slowedBoeing had just let go more than half its workforceSabey started buying bits of real estate. He is modest about those early successes, insisting anyone could have succeeded investing in real estate at a time when property was so cheap.

Sabeys big break came in 1980, when President Ronald Reagan was elected with a mandate to boost defense spending. It was pretty clear Boeing was going to benefit, says Sabey. We bought up or tied up every piece of property over 20 acres near Boeing and sat and waited. As Boeing grew, Sabey developed buildings to house new employees. Soon Sabey was Boeings biggest landlord. The long-term leases Boeing signed, in turn, enabled Sabey to borrow money from banks to acquire and develop larger properties.

But Sabey, who loves to quote Dan Tapscottof 90 percent of what you need to know has not yet been invented famehas always loved technology. Not content to develop simple office space, he took on ever more challenging projects in the Seattle area, including a data center for payroll service giant ADP, the SmithKline Beecham Medical Laboratory, a network operations center for McCaw Cellular and a semiconductor manufacturing facility for Boeing.

In the mid-1990s, he built the Intergate East and West campuses in Tukwila to service the booming technology sector. One building, originally constructed for Boeing, was custom repurposed at great expense for Exodus Communications. The technology campuses, which were served by two separate power stations, took advantage of infrastructure initially built to provide power to the many steel mills that once dotted the area.

Which brings us back to the dot-com bust, when many of Sabeys tenants, including Exodus, went out of business and broke their leases. The potential losses were enormous. But Sabey knew the value of the many improvements tenants had made in his buildings. They had installed vast banks of servers, large air conditioning systems and costly power systems to run all that equipment. They had put in expensive subfloors filled with elaborate electrical and fiber-optic plumbing.

When the tenants broke their leases, we took over something like $300 to $500 million in tenant improvements, says Sabey.

And while the startups were out of business, the internet was continuing to grow, and bigger companies like Microsoft and Amazon still had an insatiable appetite for data centers. Now that he directly controlled some 1.2 million square feet of specialized space for data centers, Sabey says, We were big enough to work directly with the national guys. The only difference was that the middlemen [like Exodus] were gone.

Sabey hired the experts he needed to run the operations and leased directly to large companies. We are really good operators, notes Sabey. Just as linemen clear the way for their teammates, he adds, We put in the infrastructure and do the financing. We do all the heavy lifting so all you have to do is snap in your servers.

To further expand his presence in the data center business, Sabey looked to Eastern Washington, where he knew he could get cheap real estate and electricity. He negotiated a 30-year deal for hydroelectric power from Bonneville Power at 2.25 cents a kilowatt, perhaps the cheapest energy in the nation, and proceeded to build substantial complexes, first in Wenatchee and then in Quincy. Sabey hired Jim Harding to oversee the increasingly complex data center operations.

The first acquisition made through the partnership was the Verizon building in lower Manhattan. This facility means traders on Wall Street will receive critical information fast, says Craig Kelly, CTO at Vizualiiz, which offers tools for data centers. Those nanoseconds are like light years to traders, explains Kelly. Sabey has also acquired property outside Washington, D.C., to build a large data center.

Not every project Sabey touches turns to gold. Where he has suffered losses, it has often been because he was motivated more from a desire to help the community than to turn a profit. He purchased Frederick & Nelson in 1989 to save the historic department store, but the operation ended up in bankruptcy in 1991. Washington CEO, a magazine he purchased in 2006, was sold to Tiger Oak Publications, the owner of Seattle Business, at a loss in 2009. It may be early to determine the wisdom of two other major acquisitions: the purchase of the old Rainier Brewerys Georgetown location for $9.9 million, and the $91 million acquisition of Associated Grocers 55-acre headquarters site south of Boeing Field.

Sabeys major investment in two buildings in the Swedish Cherry Hill medical campus involves another commitment to the community. The complex includes Swedish Medical Centers Neuroscience Institute, to which Sabey contributed $2 million, and the Seattle Science Foundation, which focuses on the advancement of medical education and technology.

Sabey hopes to combine his interest in medical research with his involvement in data centers by creating a massive database of medical information in the field of proteomics, the large-scale study of proteins structures and functions. Many believe this research will offer a far better understanding of organisms than genomics and could hold a key to drug discovery.

Why does he get involved in so many diverse tech ventures?

I have intellectual ADD, replies Sabey.

Even when he is enjoying time on his own dirt farm in Montana with his wife, Sandy, Sabey constantly makes use of technology, as when he traced the genetics of his cattle back to Scotland and raised his own award-winning breed of horses.

Ultimately, says Sabey, business for him is about being intellectually active and just having a lot of fun with my life.