These craftsman abodes in Queen Anne, Phinney Ridge and Wallingford are prized and pricey 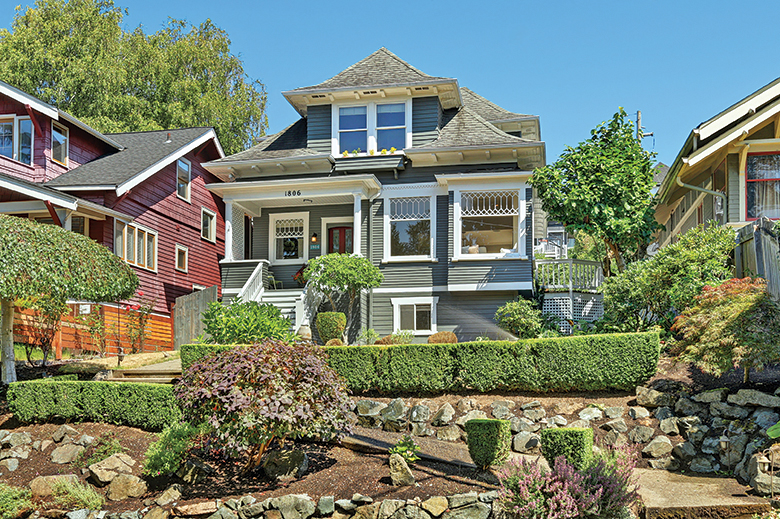 Strikingly modern forms might dominate glossy magazine pages (including ours) these days, but for many, the quintessential single-family Seattle dream home comes from the past: the Craftsman, a style of house that was built from the late 19th century to the 1930s. Small wonder, as these homes, with their hug-like mix of wide eaves, low-pitched roofs and chunky porches, are basically the family-friendly golden retrievers of home design. As increasing numbers of the citys Craftsman-style abodes fall to development, such homes have become ever more prized (and pricey). We found three dramatically different 100-plus-year-old versions proudly holding their ground at or around $1.5 million.

The overview: Enjoying an aptly haughty hilltop perch, this two-story, four-bedroom, three-bathroom Craftsman made its debut in 1904. Its refined character remains intact, thankfully, along with its original leaded windows and front door. The property is within a healthy strolling distance of Macrina Bakery, How to Cook a Wolf, Whole Foods, Trader Joes and Molly Moons. (Psst! The summer brought a $126,000 price drop. But the real sticker shocker? In 1979, this home sold for $38,000!)

Inside and out: A terraced walkway bordered by a hedge-and-rock wall leads to a graceful white-framed portico. Inside, elegance reigns, from the new pale gray and white paint scheme and era-appropriate lightingan Arts and Craftsstyle pendant hangs over the dining roomto the richly refinished maple and cherry hardwood floors. While the layout remains refreshingly traditional (no open floor plan here), all rooms show evidence of a sophisticated update. The kitchen, for instance, is wrapped in bright woods and professional appliances, and theres a modern media room (although its fitted with a retro convenience, a Murphy bed). French doors graciously open to a back terrace and large courtyard, which seems just the right size to accommodate one of those newly allowed ADUs.

The overview: Built in 1914, this two-story, three-bedroom, four-bathroom Craftsman is a case study in preservation and sustainability. A $500,000-plus remodel in 2008 updated energy systems to four-star Built Green sustainable standards and revived the homes original curb-stopping mustard-and-cardinal exterior palette. Green Lake is within easy walking distance, as are popular Greenwood Avenue retail and restaurants like Diva Espresso, 74th Street Ale House and Kens Market. (Psst! Also appealing: As of press time, there had been a $145,000 price cut.) Inside and out: A sophisticated street prospect, enhanced by drought-tolerant landscaping and a gable-and-brick entrance, comes with a sought-after bonus: a detached single-car garage topped by a roomy ironwood deck. Of course, like the rest of the home, the garage has been completely updated, automated and insulated. (The roof was replaced in 2017.) Modern new efficiencies include double-pane insulated windows, a European-style closed-loop radiant heating system, high-tech cabling and a smart security system. Thoughtful interior updates brighten the space while preserving period charm, such as the hand-glazed ceramic tiles in the chefs kitchen, and the striking white-tiled fireplace and built-in bookcases that add character to the spacious living room. Warm fir stylings throughoutfrom the kitchen cabinetry to the interior doors and upstairs master-bath vanityevoke its signature Craftsman pedigree. Completing the charm offensive is a sweet backyard with fruiting apple trees.
The details: $1.25 million Built in 1914 2,327 SQF $537 per SQF 3 bedrooms, 4 baths Parking: 1-car garage Walk score: 92
Architect: Unknown
Listing agent: Kyle Moss, Compass; 206.619.6136; kylemoss.com

The overview: Colorful is an understatement when it comes to this four-bedroom, two-and-a-half-bathroom 1914 Craftsman, and not just because its exterior positively beams with newly repainted sunny yellow clapboards and white trim. The current owners, Cajun-music performers relocating to Louisiana, introduced an array of artful outdoor elements, including four water featuresone of which was fashioned from an old-timey washing machineand a beguiling European-style interior courtyard accessed from the outside via a sliding gate trimmed in art glass and copper rails. Theres also a movable two-level stage, a 10-foot motorized projection screen and an eight-person hot tub. If you require further diversions, the Good Shepherd Community Gardens are within strolling distance, along with the shops and eateries on N 45th Street. Inside and out: Artistry is on display inside as well. Stunning original featuresgolden-hued 100-year-old Siberian oak floors, deeply dark Finnish fir wainscoting and built-in leaded glass book casesblend gloriously with equally eye-catching modern elements. For example, there is the Brazilian granite hearth, a stairwell library complete with antique Putnam rolling ladder, and the entire second-floor master bedroom and bath. The master was added in 2009, and stars a walk-in shower with backlit stained-glass panels, 72 body jets and double rain showerheads. (The owners recall one guests post-shower review as: Thats not a shower, thats a dance hall!) The master suite, along with a first-floor sunroom added at the same time, overlook that magical courtyard. Other extraordinary perks: a finished basement apartment and compelling alfresco dining options. Choose from a marble-topped, gas-fire-enabled table down in the courtyard, or, up on a spacious elevated deck, covered seating for four (well, five, including the chain-hung hardwood swing). Both come with a backdrop of mimosa and Japanese maple trees, and arbors heavy with wisteria and star jasmine vines.
The details: $1.5 million Built in 1914 2,856 SQF $525 per SQF 4 bedrooms, 2.5 baths Parking: Off-street, alley access Walk score: 90
Architect: Unknown
Listing agent: Andrea Pirzio-Biroli, John L. Scott, Mercer Island; 206.930.3456; andreapb.johnlscott.com

Editors note: Homes shown may have been sold.

This article also appears in the November issue of Seattle magazine.