From crackers to chips to nuts, the Puget Sound region has it covered. 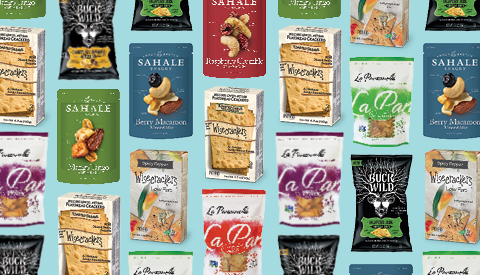 Close your eyes and think of crackers. What do you see? Puffy Oyster Crackers? Square Saltines? Round Ritz? Triscuits? Wheat Thins? Goldfish?

Paul Pigott would prefer that you see flat, crispy Croccantini thinner than RyKrisp, sturdier than matzo, hefty enough to swipe through a tub of cream cheese and flavorful enough to complement the Cambozola thats on special in the cheese cooler at the end of his outstretched arm. And hes taking steps to increase the odds.

Used to be there was but one size: 8 ounces of 4-by-7-inch crackers for $5.99. But now the supermoms piloting Bugaboo strollers through the aisles of Whole Foods can select from the original Croccantini (seven flavors), a six-ounce carton of Mini Croccantini (also seven flavors) or new this year a 4.75-ounce bag of Croccantini Bites in Italian herb (inspired by a Tuscan garden), tomato basil (summertime in an Italian villa) or spicy olive (with a kick of Mediterranean heat).

Together, these flatbread crackers dominate the salty-snack displays in the specialty grocery channel seven of the top 30 items in the category carry La Panzanella Artisanal Foods Companys label and that makes Pigott very happy.

Always an independent, entrepreneurial type, Pigott a scion of the family that founded Paccar Inc. but who never joined the truck-making business spotted an opportunity in 2003. Ciro Pasciuto, an Italian immigrant who ran a deli and bakery on Capitol Hill called La Panzanella, wanted to retire. At the time, half of La Panzanellas $2 million in annual sales came from flatbread crackers, the rest from the neighborhood deli and the sale of rustic breads.

The recipe for the crackers had come from Pasciutos mother, who started baking them during a visit to Seattle. They were crispy and crunchy, so they were named Croccantini, Italian for crunchies or crunchy bites.

Pigott bought the company and, before long, decided to concentrate on making and selling the Croccantini. He sold the bread business and, when La Panzanella moved its cracker production facilities to Tukwila, closed the deli.

Pigott, 55, grew up in Seattle, went to college back East at Hamilton College in upstate New York and returned home to get an MBA at the University of Washington. A veteran of the dot-com bubble in the late 1990s (destinations.com; linkstime.com), Pigott found a measure of stability in the seemingly old-fashioned business of food production.

Ive learned an awful lot of what its like to run businesses, he told BakingBusiness.com in 2012, and I really began to appreciate businesses that have a positive cash flow, because in the dot-com era that was rather scarce.

In the meantime, the appetites of millennials became increasingly apparent. Half of all adults were replacing as much as 50 percent of their traditional meals with snacks. And so convenience food became a $126 billion phenomenon a growing proportion of all grocery spending. Crackers alone account for $7 billion a year.

La Panzanella has been surfing that wave. Today, Croccantini are distributed throughout the United States and they also show up in snack-loving countries like Japan, China and Australia. Theres now a second bakery in Charlotte, North Carolina, to facilitate better East Coast distribution. La Panzanellas employee count is approaching 200.

Pigott says La Panzanella has the nations No. 3 specialty cracker in the grocery channel, and the No. 1 cracker in the specialty category. Locally, La Panzanella sells its products at Whole Foods, PCC Natural Markets and QFC stores, almost always in the higher-priced deli or cheese sections because the price of the crackers is relatively high: $6 or so for a box of the original Croccantini, roughly four times the price of a box of Ritz crackers. The challenge is to increase sales while maintaining the image (and reality) of a healthy snack. Croccantini have a rustic, handmade look. Equally important: Theyre made from natural ingredients and offer consumers a low-fat, dairy-free, vegetarian/vegan option for their snacking pleasure. Paul Pigott eschewed the family truck-making business, Paccar, in favor of
an entrepreneurial course that eventually led him to La Panzanella.

The challenge is to increase sales while maintaining the image (and reality) of a healthy snack. Croccantini have a rustic, handmade look. Equally important: Theyre made from natural ingredients and offer consumers a low-fat, dairy-free, vegetarian/vegan option for their snacking pleasure.

Four of five Americans tell pollsters theyd be willing to try something new a new flavor or a new product. Within that group, flavor is even more important than healthy. The new La Panzanella Bites come in a bag, something the company hasnt tried before. The target: millennials who often dont eat complete meals and can be enticed by healthy snacks. Several times a day, in fact. The average American might eat two snacks a day, Pigott explains. For millennials, that number might be five a day.

Like the originals and the newer Minis, the Bites are big enough to use as scoops for dip, and they come in several flavors, although the seasoning is on the outside of the cracker and disappears quickly on the tongue. Pigott is not concerned. The secret, he says, is to leave the original recipe alone. No tampering, no cutting corners, he declares.

DIG IN
An abbreviated history of the potato chip hereabouts.
You can trace the whole concept of salty snacks to Saratoga, New York, known a century ago for its racetrack and its Saratoga Crisps. Word of this delicious novelty food spread across the country.

In 1903, a 13-year-old Croatian immigrant named Marko Narancic arrived at Ellis Island with 15 cents in his pocket and no English. He took a series of jobs: in a steel mill, as a meatpacker and finally in a hotel, where he moved from kitchen flunky to pantry boy to fry cook. He eventually became a chef on the Milwaukee Roads Olympian train from Chicago to Tacoma, and ended up working at Tacomas Bonneville Hotel as master chef.

The Saratoga Chip was nothing more than a deep-fried, thinly sliced piece of potato, which young Narancic learned how to make using an abundant crop of spuds outside his back door in the Puyallup Valley. In 1918, he rented a storeroom behind his apartment for $5 a month and began selling his chips door to door, to households and grocery stores. Along the way, Narancic changed his name to Marcus Nalley and added other Nalley products pickles, beans, chili, salad dressings and built a factory complex in the canyon off State Route 16, the so-called Nalley Valley.

The business has had several owners since the 60s, starting with W.R. Grace and Company (1966), then Curtice-Burns (1975), which was acquired by an agricultural cooperative (Pro-Fac) in the mid-90s. Pro-Fac begat Agrilink in 97, and in 1998, Agrilink acquired Dean Foods, which owned the Birds Eye brand. Agrilink changed its name to Birds Eye Foods in 2003 and was acquired by Pinnacle Foods Group in 2009.

Pinnacle is controlled by The Blackstone Group investment firm and also owns another Northwest icon, Tims Cascade Snacks. The Tim of Tims Cascade Style Potato Chips was Tim Kennedy, who started making small batches of extra-crunchy potato chips 30 years ago. Within two years, they were being named best in Seattle and went on to win national recognition.

Tims started expanding into different flavors almost two dozen over the years, but always sold in the signature red-and-white striped bag. And it still produces chips in the Northwest, at a factory in Algona. R.H.

DIG IN | SAHALE SNACKS, TUKWILA
Taking trail mix to a higher level.
More than a decade ago, two Seattle friends were climbing Mount Rainier. They would usually load up with gourmet food but they had packed for efficiency on this climb, so all they had to sustain themselves was ordinary trail mix. When they got off the mountain, they headed straight for the kitchen, determined to create something better. Not less nutritious, just tastier.

The two pals, Josh Schroeter and Edmond Sanctis, had known each other for 25 years, ever since attending Columbia School of Journalism and working at NBC. Their kitchen experiments eventually produced several combinations of nuts and fruit glazings (cashews with pomegranate, almonds with cranberries, among others) that would form the basis for Sahale Snacks, which they named for Sahale Peak, one of their favorite climbs.

Then came the hard part: producing their recipes in commercial quantities and recruiting executives who knew how to manage a food company. Well, they succeeded. Eric Eddings and Erika Cottrell had both worked at Tullys Coffee and Monterey Gourmet Foods and knew their way around branding and food production; they signed on as CEO and VP of marketing and operations, respectively. As testimony to their savvy, Sahale Snacks was named Food Processor of the Year (by Seattle Business magazine, no less) in April 2014.

The Sahale Snacks line has since expanded with to-go packaging. Its products are distributed to 10,000 Starbucks stores and hundreds of Whole Foods and Costco locations.

Sahale Snacks has grown into a $50 million company with 150 employees. In 2014, The J.M. Smucker Company (annual revenues: about $5.5 billion) bought Sahale Snacks from Palladium Equity Partners, a private equity fund that had owned Sahale since 2007.

Schroeter and Sanctis, meanwhile, continue to spend time in the mountains together. Our last major climb was a ridiculous, horrendous and grueling effort to get up to some hot springs high on Glacier Peak, Schroeter reports. Their food focus has also shifted to higher peaks, namely the Himalayas. The new food theyre involved with is a Himalayan staple known as tsampa, a high-energy roasted-barley product made by a new social-purpose company called Sherpa Foods.

DIG IN | OBERTO BRANDS, KENT
Wheres the Beef?
According to MarketResearch.com, meat snacks like the beef and turkey jerky products from Kent-based Oberto Brands are the darling of the healthy-ingredient snack market, with sales up 8.6 percent in 2015. Meat snacks will continue to grow fast, with an anticipated compound annual growth rate of 9.6 percent between 2016 and 2020, driving annual sales of the category to $5 billion in 2020.

DIG IN | PARTNERS, KENT
Gotta love a company whose best-selling product is called Wisecrackers.
Kent-based Partners, a Tasteful Choice Company, also has granola and a line of gluten-free snacks, and it has been around for nearly a quarter of a century.

Marian Harris was working as a bookkeeper in downtown Seattle when she opened her first restaurant, called Partners. It was an unusual luncheonette, an unheard-of at the time combination of deli and bakery.

Like Paul Pigott at La Panzanella, Harris left the restaurant business behind to concentrate on making high-quality crackers. That was the fall of 1992. These days, Partners has 85 people on the payroll and Harris was recently inducted into the Specialty Food Association Hall of Fame. Partners 35 varieties of crackers, cookies and granola are sold in all 50 states and around the world.

DIG IN | CONTINENTAL MILLS, TUKWILA
The Krusteaz people woo a younger audience.
If you need further proof that the local food industry is tapping into the meteoric rise in snack food consumption, look no further than Seattles own dowager aunt, Continental Mills. Four score years ago, a Seattle womens bridge club came up with the notion of an easy just add water pie crust mix, which became the Krusteaz family of products (see page 32). This year, Continental Mills, the Tukwila-based parent of Krusteaz, launched a line of tortilla chips and popcorn snacks called Buck Wild in the hope of tapping the massive millennial market.

The company has been on a cross-country Buck Wild Road Trip, stopping at music, food and beer festivals with its SnackShot, a cannon that shoots snacks, which people attending the events try to catch in their mouths. This fall, Continental Mills announced nationwide distribution of Buck Wild products through Walmart.