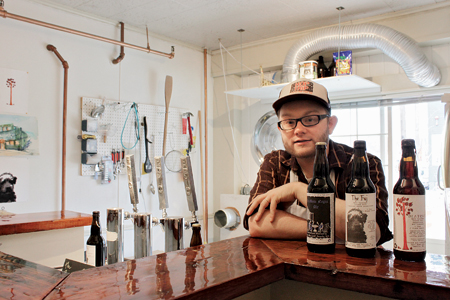 The renaissance sweeping the food worldyou know, the shunning of large-scale, industrialized, global brands in favor of hyperlocal, small-scale, artisanal productshas claimed another beachhead in the smaller is better assault: beer.
Of course, microbreweries, which produce less than 15,000 barrels of beer annually, have already taken a big share of the market from national brands with their seasonal varieties and bold flavors. But even smaller local beer makers called nanobreweries are getting into the game with rare flavor profiles and unusual styles.

Unlike Jamison, who likes his brewerys current size, Cody Morris of Seattles Epic Ales recently launched plans for an expansion that will double his SoDo space and quadruple production. His beers, designed for pairing with food, incorporate unexpected ingredients, such as spearmint, shiitake mushrooms and coffee.

Meanwhile, Kevin Klein opened Seattles NW Peaks Brewery last fall. Customers can subscribe to his beers as they would a community-supported agriculture program for a specified period (six months, 12 months, etc.). They received a new growler (half-gallon) of beer each month for $11. Though he primarily sells in Ballard, Klein hopes to expand throughout the city.