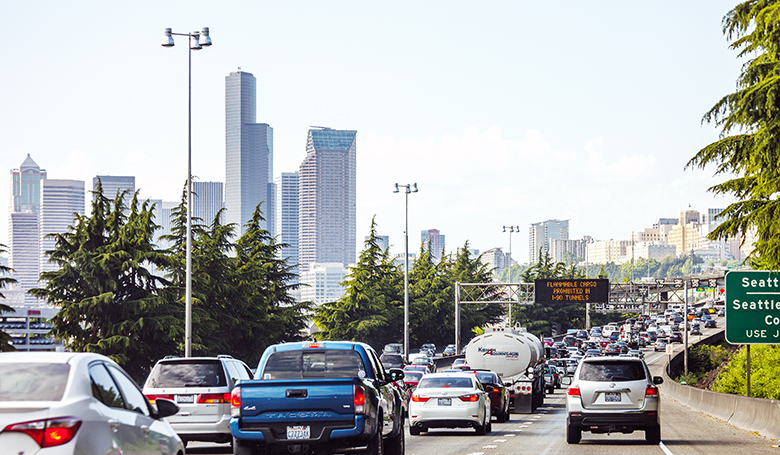 The nonprofit Commute Seattle has teamed with software company Tableau and the Seattle and Washington departments of transportation to unveil an interactive online tool that allows employers to assess their employees commuting patterns to aid them in reducing traffic congestion in Seattles downtown.

The partnership between the Seattle producer of data-visualization software, Commute Seattle and the two public-sector transportation regulators is focused on reducing the number of single-occupancy commute trips into downtown Seattle as part of a broader effort to help companies comply with Washingtons new Commute Trip Reduction (CTR) law. Some 300 Seattle area employers are affected by the new law, which requires business with 100 or more employees to mitigate their traffic footprint through efforts that reduce driving.

Commute Seattle is a transportation-management group funded by the Downtown Seattle Association as well as several area public transportation authorities, including the Seattle Department of Transportation.

By partnering with Tableau, organizations can now offer even more data to inform critical commute decisions in and out of downtown during the Seattle Squeeze, Seattles period of transition over the next five years to meet the needs of our growing city, and beyond, says Heather Marx, director of downtown mobility for the Seattle Department of Transportation.

The new Tableau online dashboard allows employers to view an overall commute-mode breakdown, a heat map of home zip codes for employees and travel patterns from each zip code.

This innovative online platform allows companies to quickly and easily digest a wealth of transportation data when making strategic decisions regarding commuter benefits, says Jon Scholes, president of the Downtown Seattle Association. As downtown continues to grow, we want to equip businesses with the best information and incentives, so employees have reliable and frequent commuting options.

The Tableau dashboard is available to participating CTR companies. More information can be found here.