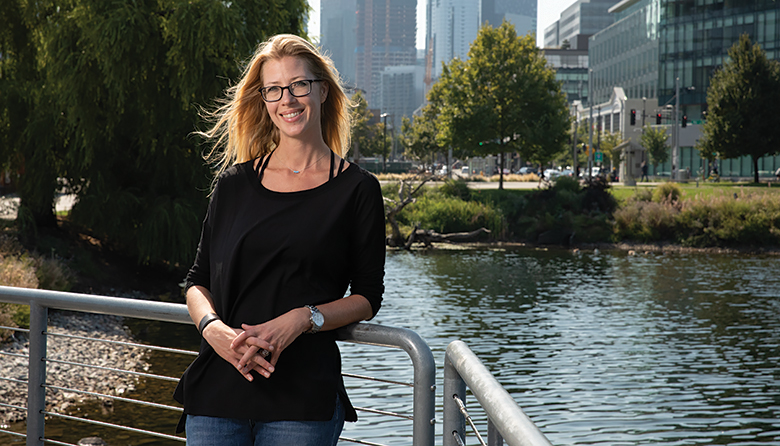 When youre walking down the street in Seattle and you get surprised by a sudden downpour, whats the first thing that occurs to you? Youre probably not thinking about where the water is headed as it runs over your shoes and down the street, and how the storm will affect the health of Puget Sound.

In the Seattle area, climate change means drier summers and wetter winters, with rainfall patterns more variable than historical norms. Local sewer and drainage systems are equipped to handle light rain falling nearly every day, but they become overwhelmed when storms dump several inches of rain within a day or two, as has been happening with increasing frequency.

Some businesses have invested in GSI short for green stormwater infrastructure, such as rain gardens, holding tanks and permeable pavement that soaks up water rather than letting it flow down the street. But such measures remain relatively rare. And even those in place may not be as effective at keeping polluted water out of Puget Sound as wed like to think.

GSI design is based on models that use historical average rainfall data; they dont consider what happens when excess water overflows the rain gardens or other mitigating arrangements during a storm. And nobody is quite sure just how harmful is the runoff filled with toxic substances from roads, the increasingly frequent sewage overflows that result when stormwater is dumped into limited-capacity storm sewer systems and the perhaps rare, but sometimes devastating, outflows of pollution from commercial businesses.

Building more effective stormwater infrastructure requires a better understanding of real-time rainfall data and where the resulting water flows. It also requires knowing what pollutants are being dumped into storm sewers and where it comes from. The necessary data, however, arent readily available. Local governments and utilities are consequently hesitant to make a substantial investment of time and money to conduct the research.

Seattle-based startup StormSensor Inc. proposes a simple strategy. By combining a network of low-cost sensors with software to manage the data they generate, StormSensors technology can collect and track flow rates, water volume and water temperature throughout a region. Sensors are installed inside sewer lines, where they take measurements every five to 10 minutes and wirelessly transmit the data.

StormSensor CEO Erin Rothman conceived of the idea for StormSensor when she worked at a Seattle consulting firm that was responsible for helping property owners comply with state regulations requiring them to monitor stormwater. Her firm had to send someone out to sample the water flow every time it rained, which struck Rothman as a waste of time. Just because it was raining outside her office, it wasnt necessarily raining at the clients building site.

Why not install rain gauges that would text the consultants every time it rained at each site? Rothman discovered that no such technology existed, and she set out to invent it.

When Rothman founded StormSensor, she brought in Anya Stettler as CTO. Stettlers background in software development allowed the company to focus on software rather than hardware and attract the funding it needed to turn vision into reality.

StormSensor started with inexpensive commercial sensors to measure water depth and temperature inside storm sewers. Water temperature is important because it indirectly indicates, without expensive testing, the presence of pollution. Water that is illegally discharged from manufacturing plants or flowing down the pavement is warmer than rain coming from the sky or overflowing from a retention pond.

Bridge runoff forms another major source of contamination. The Washington Stormwater Center analyzed water coming from a downspout on the Highway 520 bridge in Seattle and found that it contained thousands of contaminants. Beyond the expected toxins heavy metals and hydrocarbons from oil and grease the water also contained pharmaceuticals and pesticides.

Testing that reveals the exact chemical composition of a water sample requires an expensive machine, but temperature measurements are sufficient to identify the sources of the greatest levels of pollutants. Simple sensors can do the job.

Most existing water-flow sensors were developed for scientific research. They collect extremely accurate data, but each sensor costs thousands of dollars. For stormwater management, there is no need to know the precise water temperature down to thousandths of a degree, and sensors dont need to operate at extreme temperatures. Scientific-grade sensors are certified for operation from minus 40 to 150 degrees centigrade, which is overkill for stormwater management. There is a need, however, to collect data at many locations to paint an accurate picture of where the water is flowing during storms. This is where StormSensor comes in.

StormSensor is conducting pilot projects in several cities, including Seattle. Participants in the pilot program buy a few sensors to test the concept. Locally, Seattle Public Utilities is measuring water flow near drainage facilities to understand the capacity of these facilities and determine where to focus infrastructure improvements.

Statewide permitting regulations require commercial property owners to collect water samples from their properties four times a year to measure pollution levels in the water. These requirements are more stringent than federal regulations, but they still only provide limited data. Businesses dont have much incentive to control the daily flow of water from their gutters and parking lots.

StormSensor is partnering with the Seattle 2030 District, a nonprofit trying to reduce the environmental impacts of city buildings, to change the conversation and encourage smarter stormwater infrastructure development. The two joined forces for a competition starting in January. Property owners will compete to see who can manage the greatest percentage of the stormwater flowing off their sites. Managing the stormwater means ensuring that rain doesnt drain off their property into local lakes or Puget Sound. Sensors from StormSensor will be installed on participating properties to measure water flow throughout the competition, from January 1 through June 1, 2019. The competition will be open to businesses throughout the district, from South Lake Union to SoDo. Steven Fry, green stormwater program manager at the Seattle 2030 District, hopes the competition will raise awareness and drive innovation. With reliable data, organizations could work together to create a stormwater infrastructure network that minimizes impact on Puget Sound. Fry would like to see government incentives that encourage the development of better stormwater infrastructure.

One of Rothmans long-term goals is to help low-income neighborhoods by donating money to nonprofits working on the heat island problem. Her idea is to support local organizations in the cities where StormSensor sells sensor networks. Rothman hopes her companys technology will cause improvements to happen where the sensor data indicate they are most needed, not in the communities with the most money to spare.

Meanwhile, StormSensor is looking to the future. Rothman hopes for a network of thousands of sensors covering all the waterways that drain into Puget Sound. Beyond measuring flow volume and temperature, StormSensor is developing a custom water velocity sensor to measure flow rates better. Rothman envisions adding electrical conductivity measurement to show the presence of heavy metals in the water or provide evidence of sanitary sewer discharges in pipes flowing into the sound.

With costs to upgrade water infrastructure nationwide estimated at $1 trillion during the next 25 years, according to the American Water Works Association, it is important to determine priorities. Futurewise, a nonprofit organization focused on sustainable urban growth in Washington state, came to the same conclusion. Its 2016 Lay of the Land Report on King County stormwater infrastructure recommends a vast array of research to determine how to improve that infrastructure and suggests prioritizing programs on a regional level rather than each city making decisions independently.

The Futurewise report mentioned a lack of understanding regarding the effectiveness of the green stormwater infrastructure techniques that have been implemented, such as permeable pavement or retention ponds. Technology such as StormSensors can help. It wont solve all the problems with stormwater, but it can point the way toward concentrating infrastructure improvement efforts where they will make the most difference.

Rothman has a team of seven engineers on the job who bring that goal within reach. It would be extraordinary, she says, if we could understand how all of the water in Puget Sound is moving.