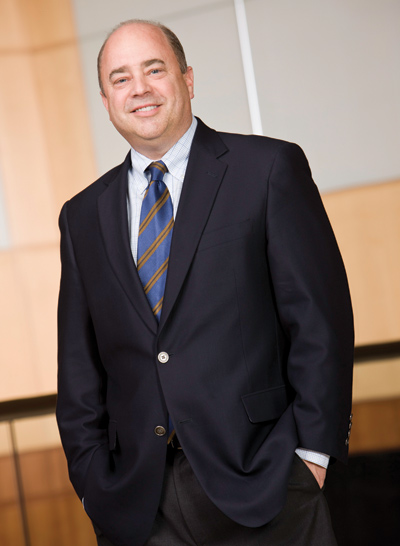 To Pete Stanton, chairman and ceo of Washington Trust Bank, success is all about giving the customer something other banks cant.

With customers in Seattle and Bellevue, it offers the same personalized private banking service that has garnered the institution almost a 30 percent share of Spokanes overall banking market. We have been in Spokane for over a hundred years and our approach to banking is still the same, says Stanton, the fourth generation of his family to run the bank. Give customers what they want in a timely fashion.

He adds that this approach is particularly important for a bank with Washington Trusts focus. Traditionally, we have been a commercially oriented bank with 75 percent of our loan portfolio in the corporate arena, notes Stanton. Our customers want to deal directly with the decision makers who know their business and can respond promptly.

This is a service most larger national banks are not equipped to offer, Stanton asserts. For example, a customer is at an auction and needs a piece of equipment to expand his business. Can he get a same-day decision from a banker who requires approval from someone, who knows nothing about that customers business and is located on the other side of the continent?

Stanton says he makes sure he and his bankers maintain close communications with commercial customers. Whether it is me, our president [Jack Heath] or one of our personal bankers, all our commercial clients have direct access, anytime, day or night, to someone who has lending authority, says Stanton emphatically. My door is always open, I can be contacted by phone or email, and my calls are returned the same day. His focus is on serving customers because I know that will get us more customers.

This business philosophy has served Stanton and his forebears well. Since his great-grandfather first opened the banks doors in 1902, Washington Trust has survived the perils of the Great Depression it was one of a handful of Northwest banks that honored all cash withdrawals and never closed its doors as well as numerous regional economic downturns and recessions and, most notably, the recent rash of bank consolidations and acquisitions.

Today, washington trust is one of the largest independently owned, full-service commercial banks in the Northwest, with 41 branches and offices, and 791 employees offering a range of banking services in Washington, Oregon and Idaho.
During the past decade, as the American economy nosedived and financial giants like Lehman Brothers and Washington Mutual collapsed, Washington Trust increased its asset value from $2 billion to $4.3 billion. For Stanton, it was a matter of remaining true to his banks philosophy: staying a conservative course, avoiding questionable or risky ventures, and working closely with the customer base to reduce risk for them and the bank. During this period, he notes, we continued to serve our customers as we always have and they, in turn, have remained loyal to us.
The fact that Washington Trust maintained its reputation as a solid financial institution throughout the banking crisis opened the door to some opportunities for growth. In the fall of 2008, at the height of the recession, when Pinnacle Bank of Beaverton, Oregon, was shuttered by the Federal Deposit Insurance Corporation (FDIC), Washington Trust Bank was tapped to take over the failed institution, adding $73 million in assets and $64 million in deposits to the Spokane-based banks balance sheet.
Even more significant to Stanton and his banking team was the chance during that tumultuous period to recruit some top talent that otherwise might not have been available. While others may have cautioned against hiring during a recession, Washington Trust pursued an aggressive hiring policy when opportunities presented themselves. In our business, service and the people who deliver that service determine whether or not you are successful, says Stanton. Rather than hiring by the numbers, we have always looked for smart, experienced and knowledgeable bankers who are capable of making decisions on the ground and very close to the customer.

If theres any question whether or not Stantons policy of hiring smart, engaged bankers bears fruit, consider Washington Trust Banks return on equity (ROE), a recognized measurement of how efficiently a bank performs. While the national bank average is just below 10 percent, Washington Trusts ROE runs substantially higher at 14 percent
Richard Hadley, president and CEO of Greater Spokane Incorporated, the regions chamber of commerce and economic development council, attributes Washington Trusts ongoing successes to the ideal blend of philosophy, services and products. Washington Trust is extremely well managed, Hadley observes. It has remained accessible to the community it serves and yet it offers a range of services that rivals a national bank,
Hadley adds that the advantage Washington Trust enjoys over competing national banks is that it offers its customers direct access to upper management. The buck stops at Peter Stanton, says Hadley. The knowledge that you are dealing with someone who understands your business and also can make the final decision carries a lot of weight.
That weight is not disregarded by Washington Trusts competition. Tom Kisting, CEO of Spokane-based AmericanWest Bank, sees Washington Trust as a force to reckon with. In Spokane, they are the toughest competitor we have by far, he says. They are a relationship bank. Most of their customers in Spokane have banked with them for a very long time.
Since opening offices in Seattle in 2000 and Bellevue in 2004, Washington Trust has built a strong following in the Puget Sound area. We have significant deposits and loans in the market nearing a billion dollars, says Scott Luttinen, EVP of Washington Trusts Commercial Banking Division and president of the Western Washington Region.
Luttinen, who is based in Seattle, is eager to point out the difference between his institutions traditional role as a full-service bank on the east side of the state and what it offers on the west side. Here we have chosen not to have a retail presence, he says. We just deliver services to commercial banking clients [and] private banking clients … and wealth management services to principals of those businesses and to high-net-worth individuals.
This focused approach appears to be working for Washington Trust in the Puget Sound region. In spite of fierce competition for the commercial and private banking dollar, Luttinens team has excelled. The market growth in our sector nationally has been in the 3 to 4 percent range, he notes. We have been able to do double-digit growth year over year. Even more impressive: With only the two offices in King County, Washington Trust ranks as the 10th-largest bank in the county, based on market share of customer deposits. As of June 30 last year, its market share in the county was 1.3 percent, placing it ahead of Tacoma-based Columbia Bank, which has 14 offices in King County, Seattle-based Banner Bank (13 offices) and Oregon-based Umpqua Bank (15 offices).

Behind the banks impressive track record in the Puget Sound market is its ability to entice customers away from other financial institutions, Luttinen says. That task falls to a team of experienced bankers who possess an expertise that matches their clients needs. Our success has been in our ability to hire strong bankers in the market who have relationships and can articulate our value difference and get customers to leave other institutions and have a different experience with us, says Luttinen.
Stanton admits to some initial apprehension before entering the Puget Sound market. One of the things we worried about was how do you scale a business and get larger when you have a personable approach? he asks. In retrospect, the answer was already woven into the fabric of the banks corporate culture. It all comes down to the people we hire, he notes. Our goal has always been to find exceptional individuals who have enough banking knowledge and experience to interact directly with a client and play a key role in any decision-making process.
By pursuing that same hiring objective in Seattle and Bellevue, Stanton believes his bank has managed to extend a level of service enjoyed by clients in Spokane to the west side of the state. We have had a successful formula now for 111 years, working in areas of banking that not only require personalized attention but also demand a customized approach to growing a business, Stanton says. This is what we do and this is what we do well.