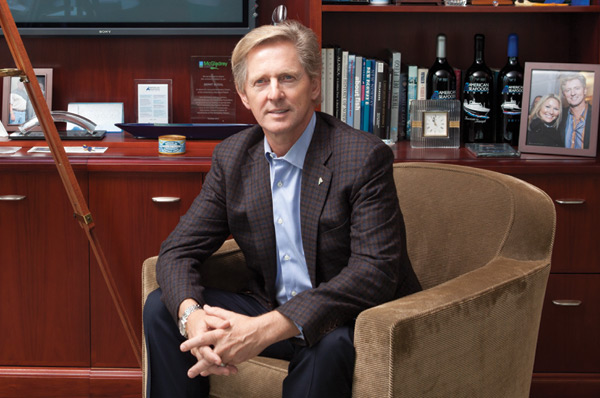 The Norway-born executive achieved national prominence earlier this year when he appeared on an episode of CBS’s Undercover Boss, taking on tough assignments like hauling fish on board a catcher-processor in the Bering Sea and cleaning fish guts from equipment at a processing factory in New Bedford, Massachusetts. Bodal is no stranger to hard work. He started in the fishing business as a deckhand and worked his way up to CEO and majority shareholder of American Seafoods, a company with more than 1,600 employees and annual revenues of about $600 million. He is also a bass guitarist who has played with Eddie Vedder of Pearl Jam and Roger Daltrey of The Who.

Lessons: I always knew we had a dedicated workforce. This certainly reinforced that. I used to do some of these jobs myself more than 25 years ago. I had forgotten how physically demanding they are. Im in pretty good shapeI work out several times a weekbut its really not an old mans game. Im surprised from other [Undercover Boss] shows how many CEOs dont know how their company is run from the ground up. At American Seafoods, many of us [in management] have spent several years at sea, so we understand what goes on on the boats.

Early years: I grew up outside Oslo, Norway, where my father was a tram conductor. We werent poor but we certainly werent well to do. We didnt have a car until I was 10. We couldnt afford a television. I became a professional musician for five years. Our band [Host] recorded three albums.

Immigration: My mother and stepfather moved to the United States before me. They had connections in the fishing business. I wanted to try something new, so I worked as a deckhand on a fishing boat and became a U.S. citizen. I became captain after a year. I spent 13 years fishing in Alaska, and became part owner of a trawler. I joined American Seafoods in 1990 as a minority partner and became president of the company in 1994. The American Fisheries Act of 1999 prohibited foreign ownership [of fishing vessels] of more than 25 percent. Our company at the time was Norwegian owned. We [management] got an exclusive right to buy the company from the owners for about $475 million, with financial backing from a New York equity firm. I now own 67 percent of the company.

Management: I learned everything on the job. When you are captain of a factory trawler with 100 people on board and at sea for weeks and months at a time, you have to be everything from CEO to psychiatrist. You are physically catching fish and managing people. Its a great way to learn how to manage and motivate people.

Lessons: Always hire people smarter than yourself and never micromanage them. Being a CEO is like being a coach. Your role is not to score points; its to motivate the players to score points. Some CEOs want to be involved in every detail and thats not a good way to motivate people.

Culture: We have no office politics here. The whole executive team has been here for at least 10 years, and, in some cases, 15 or 20 years. We hang out together. We dont really believe in hierarchy.

Strategy: When I joined the company, we had two vessels, but we expanded until we had 16 boats. In that old Olympics-style fishery, it was all about catching as much fish as fast as possible. After the American Fisheries Act, we were told exactly how much fish we were allowed to catch, so it was all about maximizing the value from each fish. We scrapped a lot of boats and became more efficient. Today we get more than double the protein from each fish compared to what we got in the early 1990s.

Growth: Even with limits on our fish catch, we can grow organically by about 5 percent a year. We have had steady cash flow over the years. But there is more growth potential in the value-added side of the businesses.

Diversification: Dont remind me of the catfish business. We were very glad to get out of that business three years ago. There were a lot of independent farmers there who didnt care what the market was doing. But weve been building our value-added business in New Bedford. We take our fish and make it into products for retail or food services. We are always looking for opportunities. We just acquired Good Harbor Fillet [which makes fillets and fish sticks for retail and restaurants]. We are about to launch a new line of nutraceutical supplements made from very high-grade fish oil from Alaskan pollock. Were also less focused on any one market. Seventy percent of our sales used to be in Asia; now, its about one third Asia, one third Europe and the rest here.

Recession: Our products arent high-value products like king crab, halibut or salmon, so even in a recession, there is always demand. Seafood is being more and more recognized as a healthy choice, so there is strong demand. Although prices did come down a bit, we didnt lay off anybody.

Fishery: We had extraordinarily good fishing this year. Weve seen more fish than weve seen for decades. The scientists say we have some strong years entering the fishery.

Music: In the last few years, Ive done a lot more music. I play in a band called White Sox with people like Alan White [the drummer] from Yes. Ive also played on stage with Sammy Hagar and have done four shows with Roger Daltrey. I play every day for about an hour. These guys dont let you play with them if you dont know what you are doing.

Flying: I have an Airline Transport Pilot rating.

We [American Seafoods Group] have a Falcon 2000 [business jet] I always captain myself. I fly around the world because we operate in Southeast Asia, China and Europe. Ive flown more than 7,000 hours and Im type-rated on numerous types of jets.