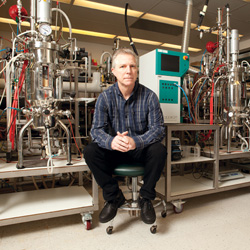 Alder Biopharmaceuticals, which survived tough times with the support of the local biotech community, is riding high thanks to a billion-dollar commitment by Bristol-Myers Squibb to one of Alders most promising drugs. But even with a huge boost in cash and confidence, the seven-year-old company is treading carefully through what is known as the valley of deaththe startup-killing period between promising findings and commercial launch of a drug.

From its modest suburban campus in Bothell, Alder is now directing clinical trials for ALD518, the compound that captured Bristols attention by showing promising results in the treatment of inflammation in rheumatoid arthritis and cancer, which afflict millions of Americans and represent giant markets. Rheumatoid arthritis alone afflicts an estimated 1.3 million adults in the United States, many of whom are not getting relief from current therapies such as Bristols own Orencia, Abbotts Humira and Amgens Enbrel.

In the fall of 2009, Bristol pledged $1.07 billion, starting with a first installment of $85 million, in exchange for the rights to develop and sell ALD518 for inflammation in rheumatoid arthritis and other indications. The complex agreement also includes royalties to Alder from Bristols sale of the compound for arthritis applications. Alder retained the rights to develop and sell the compound to treat devastating weight loss associated with cancer.

Its a tricky time for founders Randall Schatzman, CEO, and Mark Litton, chief business officer, who launched Alder in 2004, not long after sketching their ideas over a dinner at a McMenamins restaurant. They say they learned important lessons from the closure of Celltech R&D, a United Kingdom company with a lab in Bothell, where both had worked, as well as from watching the takeovers of other local firms with promising products, such as Immunex and ZymoGenetics. We saw a way to build value and remain an independent company with a deep pipeline, Schatzman says.

One of Alders lessons was to stay lean and independent for as long as possible. Schatzman had to lay off employees at Celltech R&D when its owner in Great Britain decided to shut it down. So when he and Litton hatched the idea for Alder, they decided to move cautiously, keeping things going for almost a year before they brought in their first investors.

They credit their survival through those tough early days to a village of supporters in Seattle. A corporate attorney helped them get incorporated, and another biotech, Ceptyr, lent them lab space in exchange for equity. They also worked for a while out of office space that Seattle Genetics CEO Clay Siegall provided in exchange for an equity share in the company.

Clay gave us help long before he was on our board of directors, Schatzman says. Seattle Genetics boasts its own antibody product that will apply for Food and Drug Administration approval this year.

The founders made sure they had a strong team with broad expertise. Schatzman has a doctorate in molecular pharmacology. Litton holds a doctorate in immunology. Their chief scientific officer is John Latham, a biochem Ph.D., who also worked with them at Celltech. Lathams work there was in inflammation, autoimmune disease and osteoporosis, and included developing novel genes into therapeutic targets.

Another important strategic move was to establish a partner with deep pockets. The $1.07 billion it will receive from Bristol, assuming Alder reaches specified milestones, gives it a steady source of cash that reduces pressure on the company to keep finding new investors. (A Bristol spokesperson declined to comment on the duration of the agreement.)

Finally, the company chose an approach that would result in faster development of drugs. Much of what sets Alder apart is its focus on the manufacture and use of yeast instead of mammalian cells to produce antibodies. Antibodies are Y-shaped molecules that bind to what the human immune system sees as threatssuch as invading bacteria or possibly a cancer cell. Biotechnology allows engineering of antibodies to carry out specific tasks in therapy against diseases.

Industry blog Fierce Biotech named Alder as one of the leading 15 biotech companies to watch in 2010 in large part because of its yeast-based approach, which the blog called far more efficient. Alder says creating an antibody from mammalian cells takes about year, while doing the same thing with yeast requires five weeks.

With 60 employees, Schatzman says he plans to remain conservative with the companys cash. For now, Alder is contracting out its manufacturing to a variety of labs, although the company might one day build its own manufacturing center. Even so, capital will remain a challenge for Alder. In a different economy, without a recession, the company would have gone public with an initial offering of stock.

We are at the stage, with a proof of concept, where historically you can go public, Litton says. But our investors who bought in early will have to wait. Among the early investors in Alder was the Washington Research Foundation (WRF), a nonprofit that helps support research and scholarship in Washington state.

Thong Le, managing director of the WRF, says its venture capital arm invested in Alder because of the strength of the management team and the potential market for these compounds. Antibodies are one of the fastest-growing drug classes out there, Le says. Therapeutic antibodies are considered a highly profitable and rapidly growing product area in medicine. One estimate put the value of United States sales of these in 2009 at $45 billion.

In 2011, the team hopes to continue research and prove that ALD518 will work well in other autoimmune diseases besides rheumatoid arthritis. It also wants to continue exploring how the medication seems to ease the weight loss and fatigue of cancer patients.

Many cancer patients do not die as a result of their solid tumors growth, Schatzman says, but rather because their growing fatigue and lack of appetite eventually lead to fatal weakness. This wasting is known as cachexia (pronounced kuh-KEK-see-uh). The inflammation associated with cancer is a home wrecker, he says.

In preliminary research, ALD518 seems to block inflammation that contributes to this wasting syndrome. There is much more to be discovered about this model for improving the quality of life of cancer patients, including convincing physicians that a treatment is worth using even if it does not shrink tumors, Schatzman admits.

Besides ALD518, the company has two other compounds in its pipeline. One aims to battle pain and the other to interfere with tumor growth in cancer.

Alders success adds to Seattles growing strength in what are called immunotherapies. These therapies use the bodys own immune system to fight disease. For example, Seattles Dendreon created a therapy called Provenge that causes antibodies to target prostate cancer cells and send therapy directly to those cells. The University of Washington, as well as other research centers in Seattle, has deep reservoirs of talent in immunology.

Even as Litton admits it was challenging to run multiple research studies on different compounds, he says Alder is determined to stay around for the long term. We love what we do, he says. There is nothing more exciting.” 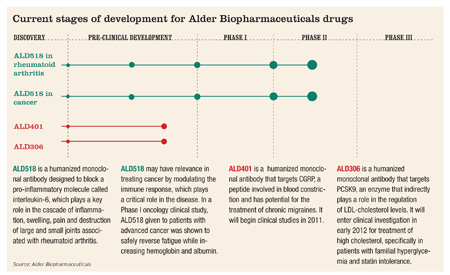