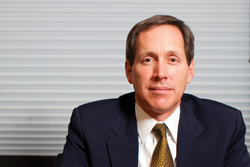 Liberty Lake in Eastern Washington may not be an obvious headquarters site for a company with global reach. Itrons CFO Steve Helmbrecht admits as much, that when talking to prospective customers, Sometimes I have to point out Spokane on the map. But the maker of digital smart-grid systems for electricity and water is riding a growing worldwide appetite for better resource management.

This shift to a global strategy is still relatively new to the 35-year-old company, driven by its more recent focus on metering systems in only the last eight years. Itrons systems use computer networks to provide ongoing feedback and analysis, reduce waste and make sure that electricity or water are routed to where they are needed at the right times. Helmbrecht notes that the shift has also pushed the company to evolve into a comprehensive provider of solutions and services, rather than just a technology vendor.

Philip Mezey, who has played a key role in strengthening Itrons global energy business and takes over as the companys new CEO on January 1, said in his first conference call with analysts that Itron has a significant opportunity to take the integrated telecommunications, hardware and software services it is now offering to customers in North America to new customers overseas. The world is moving toward connected systems and intelligence … to maximize resources, modernize the grid and provide for a growing populations, said Mezey. Itron is poised to take advantage of this shift.

Much of Itrons $2.1 billion in revenues still come from North America, where regulatory changes drive utilities to upgrade their systems for greater efficiency. But construction of new systems in the developing world present even greater opportunity, and Itrons technologies now support nearly 8,000 utilities in more than 100 countries. While the company has made some inroads in Europe, its strongest global prospects are in Latin America and Asia Pacific countries.

By Helmbrechts reckoning, fewer than 10 percent of the worlds utilities have upgraded to digital metering technologies. That suggests a huge space for Itron to grow into, even as it faces much larger competitors, such as General Electric, Siemens and Schneider Electric.

Worldwide populations and energy demands are growing, Helmbrecht observes, and the stresses that situauation places on utilities will drive more interconnected systems. This, he says, sets the stage for our view of the future for the next 10 to 20 years.