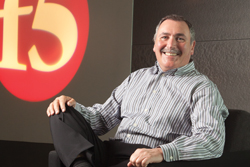 F5 nearly collapsed during the dot-com bust when the biggest customers for its software started going bankrupt, one after the other. The company reinvented itself and now has more than 3,000 employees and over $1 billion in sales. It builds software and hardware which, when placed in a client companys computer network, helps data to be processed more efficiently and applications to work more effectively. Customers such as Facebook use hundreds of thousands of dollars worth of F5 equipment. The company now has a 60 percent share of the application delivery controller market. Rival Cisco acknowledged F5s dominance when it pulled out of the market last September. F5, as the market leader, should win over a big share of those Cisco customers as they turn to new suppliers, and F5 has bolstered its sales team to make sure that happens.
The company could benefit greatly from several technology trends. We are in the sweet spot of lots of global developments in technology, from virtualization and cloud computing to mobile, says John McAdam, CEO.

But those markets are only worth a few billion dollars. What makes F5s future really promising is its move into the $15 billion market for providing network security. Because of F5s deep knowledge of how its customers networks operate, it can add security features more efficiently and without slowing down the transfer of data. At least one city police department uses F5 software to encrypt data traffic. And many enterprises want to offer employees and customers the opportunity to tap into their corporate computer systems without compromising security.