Real wages have plunged even as corporate profits have climbed to where they now represent the highest percentage of GDP in the nation’s history. 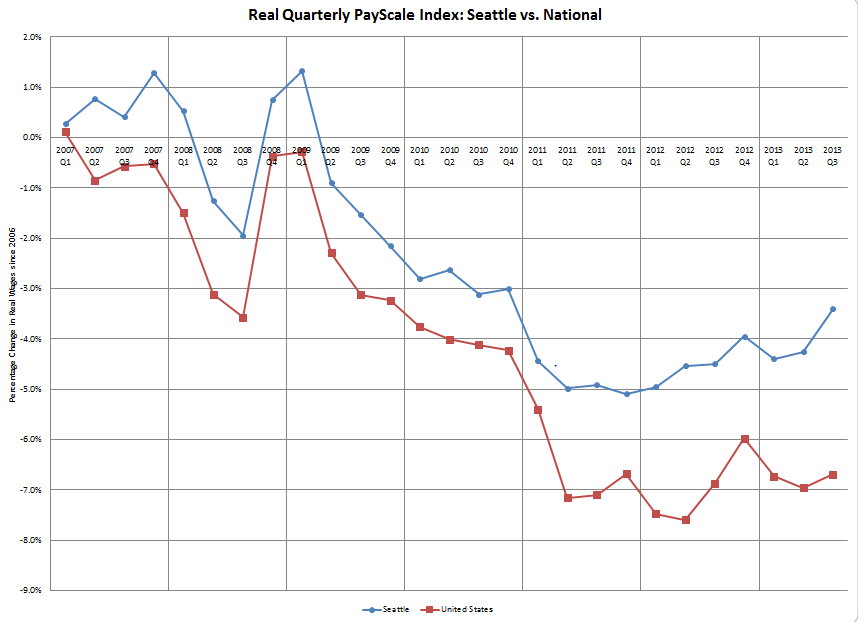 Seattle-based PayScale has released data that confirms what many of us have long suspected: Real wages–compensation adjusted for inflation–have been going down for years. And while Seattle is doing better than the rest of the country, even here real wages have fallen 3.3 percent in the last six years.

These wage declines are coming at a time when corporations have shown record profits. According to the U.S. Commerce Departments third quarter gross domestic products report, corporate earnings were up 18.6 percent over the past year and now represent the highest percentage of GDP in history.

“Our research shows turnover increases and productivity decreases when employees feel undervalued, says Bardar. We believe this is the time for businesses to reassess their compensation strategy to ensure long-term success.”

Payscales previous compensation index showed wages inching up year after year, showing a 12 percent increase since the beginning of 2007. The new Payscale index, however, which incorporates the Consumer Price Index to reflect rising costs, shows a very different picture.

But when you take into account increases in the cost of living, wages have plunged. Nationwide, real wages had fallen by about 7.6 percent from 2006 to the the middle of 2012. Wages regained some of those losses at to close down 6.7 percent by the end of September.

Seattle has done a little better. Wages fell only about 5 percent in the six years through early 2012. And wages have shown a much stronger recovery since. Still, even with the recent improvements, real wages in the Seattle area are still down about 3.3 percent over the past six years. Going forward, Payscale predicts that compensation will continue to fall behind inflation.

Heres a chart showing real wage trends nationwide (in red) versus in the Seattle Area (in blue.)