With the economy soaring, its hard to gauge the effectiveness of Seattles minimum-wage hike. Some small-business owners remain dubious. 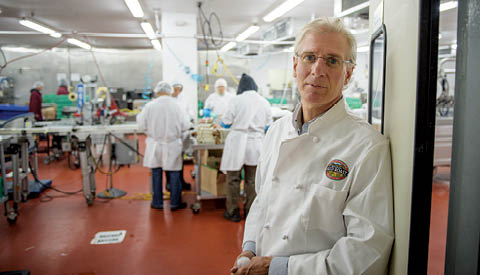 When the Seattle City Council passed the $15 minimum- wage ordinance in June 2014, David Lee, founder and CEO of the Field Roast Grain Meat Company, was not happy.
The minimum wage hurts businesses like ours that compete on a national level, says Lee, who believes it makes employers feel cheap and weakens the goodwill that bound employers to employees.
Even so, reflecting the mixed feelings of many Seattle businesses that want to do the right thing even as they struggle to survive, Lee decided to raise the minimum pay of his workers more than 20 percent to $15 an hour this fall, years before he was required to do so under the law.
I wanted to get it behind me, he explains.
Under a complex, multitiered system, Seattle companies with more than 500 employees must begin paying a $15-per-hour minimum wage starting in January. Companies with fewer than 501 employees have until 2019, unless, like Lee, they provide health care or other benefits, in which case the $15 minimum wage rule applies to them beginning in 2021. Lee says his decision will cost Field Roast $300,000, about a quarter of its total earnings in 2015.
Ivars Seafood increased prices by 21 percent in 2015 to cover an increase in employees minimum wages to $15. The company didnt have to start paying $15 an hour until next year, but Ivars President Bob Donegan believed it was the right thing to do. The decision helped resolve long-standing tension between lower-paid workers in the kitchen and wait staff who received much higher wages thanks to tips. Donegan says most patrons continue to tip even when they are told gratuities are now included in their bills. A CASE OF COMPRESSION: Lynn Stacy unwraps grain meat for sausage products at Field Roast,
which has a flatter pay structure because of its higher minimum wage.
Some companies, however, remain concerned that the higher minimum wage could still hurt them. BrightStar Care, which offers home care and medical staffing in most states, is operating at a disadvantage because of the minimum wage, says CEO Shelly Sun. Our Seattle franchise has only about 50 employees, Sun notes, but its being treated like a big business.
Because Seattle treats the franchised operation of a national chain as if it were a large business, BrightStar will have to pay $15 an hour as of January, whereas some of its competitors with similar employee numbers in Seattle may not have to pay that much until 2019. Sun says a consequence may be reducing the size of the Seattle franchisees staff, which could have implications for clients.
Meanwhile, the national restaurant chain Buffalo Wild Wings says it is hesitant to expand in Seattle because the high minimum wage makes it economically inefficient to hire and train inexperienced workers. Still, what was once considered a movement isolated to liberal western cities like Seattle and San Francisco has gained sufficient momentum nationwide to be included in the national platform of the Democratic Party this election season.
Thanks to Seattles strong labor market the unemployment rate in the Seattle metropolitan area was 4.4 percent in July (compared to 5.8 percent statewide) the higher wages have had little negative effect on the economy.
A report released in July by the University of Washingtons Evans School of Public Policy and Governance concluded that the new minimum wage law hasnt had a lot of upside, either. Since a strong labor market would have increased wages in any case, the study concluded, only a quarter of the recent gains could actually be attributed to the minimum-wage law a little more than a few dollars a week.