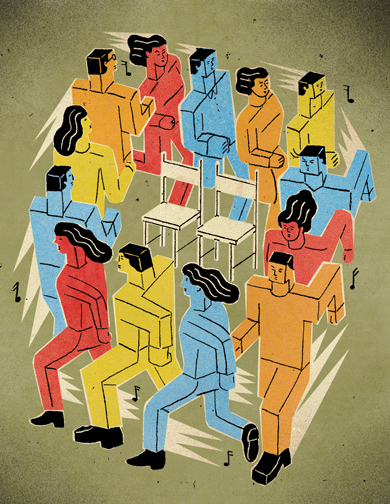 After a year of working as a receptionist under an abusive
boss at a physical therapy office, Hannah Hurvitz decided to quit and look for
something better. Unfortunately, the year was 2008, and job opportunities were
disappearing rapidly. She applied for more than 160 receptionist jobs, but
received only a few interviews and no offers.

One thing she knew was that even in the midst of the
recession there were always jobs available for nurses. Hurvitz began taking
prerequisite courses for the nursing program at North Seattle Community
College, which she completed in June. Only one major obstacle remains:
admission to the nursing program, which received 230 applications this year but
accepted just 64 students.

If you are not at the top of the class, youre not going to
get selected, she says.

Hurvitzs dilemma is increasingly common among residents of
Washington state. Although there are always thousands of jobs availablethere
were about 32,000 job openings in Washington during 2009 even in the middle of
the recessionmost of those jobs either do not pay enough to support someone in
a major metropolitan area or demand skill sets not available among the states
hundreds of thousands of unemployed.

Almost half of the jobs available at any given time are
positions such as cashiers, waitstaff and customer service representatives,
jobs that pay little and have high turnover. Another 25 percent of the
vacancies offer a median wage of $24 an hour, but are in fields such as health
care, computer science, engineering and management, for which there is a
shortage of talent. In part, this situation is the result of a lack of interest
among K-12 students in what teachers call the STEM pipeline: science,
technology, engineering and mathematics. But another key obstacle is the lack
of capacity in the higher education system that prevents state residents from
getting the training they need to fill those positions.

The current supply of people trained for these science-based
jobs does not meet the demand, and this leads to an employment gap, says John
Lederer, director of policy planning and research at the Washington State
Higher Education Coordinating Board (HECB). Theres no reason to believe that
when the economy picks up again, those gaps wont be every bit as large as they
were before the recession.

In a 2009 report by the Washington State Employment Security
Department listing occupations with the most vacancies, registered nurses took
the lead with 2,278. A study by the University of Washington estimated that the
number of graduating registered nurses will have to increase by at least 400
every year beginning in 2010 to meet projected demand.

Right now we have a little hiatus because the economy has
been bad, so hiring has slowed down, says Linda Tieman, executive director of
the Washington Center for Nursing. But its going to reverse as the economy
improves.

An Education and Training Gap

The need for more graduates in the STEM areas of study is
apparent, but the capacity to produce these graduates does not exist.
Washington has 39 entry or prelicensure programs for people wanting to become
registered nurses. However, because of lack of available spaces in those
programs, approximately 2,700 qualified applicants were turned away this
yearwhich would have been almost enough potential graduates to fill the 3,019
registered nursing jobs projected to become available in four years.

We dont necessarily need more schools, Tieman says. We
need to expand the schools that we have. Were going backwards here.

Computer science and engineering industries face a similar
problem. The 2009 report showed a shortage of computer software engineers and
computer specialists, with 432 and 408 vacancies, respectively. According to a
2009 report by the HECB, state universities are producing less than half the
number of computer science majors needed to meet projected demand in 2011.

However, state universities are not able to produce these
graduates. Ed Lazowska, the Bill and Melinda Gates Chair in Computer Science
and Engineering at the University of Washington, says his program turns away
between 50 and 80 percent of qualified applicants each year. These are freshman
who have already been admitted to the UW and have completed all the
prerequisites for the computer science and engineering program, but cannot be
accepted due to a chronic shortage of student places in the programs.

Would-be college students in Washington state who hope to
graduate and find jobs in high-demand industries are not getting the training
they need. As a result, these industries end up with vacant positions, which
they must fill by recruiting out-of-state or from overseas. The state of
Washington ranks first in the nation for the number of college degree holders
from out-of-state as a proportion of the total population.

The question
is, does every kid who grows up here and has the interest and the capability
have the opportunity to compete for these jobs? Lazowska says. And the answer
is no.

Its not just students who lose in this situation, but
businesses as well. Companies like Microsoft and Boeing can recruit new
employees from every major campus in the country and can afford to fly them in
for job interviews. Startups and small companies have no such luxury, and its
these new companies that generate many of the jobs in Washington.

The reason for the low capacity in education is a lack of
funding, caused by the recession. Education programs in the science and
engineering fields often take the biggest hits during budget cuts because they
require more faculty and more expensive equipment than programs in the liberal
arts. Last year, the UW faced a 27 percent budget cut, which led to a 10
percent cut in the computer science and engineering department.

If youre trying to save dollars, theres a pressure to cut
the higher cost fields of study first, and its hard for institutions to resist
that pressure, Lederer says.

In addition to the cost of equipment, Tieman cites the
difficulty of offering competitive salaries to people who are qualified to
train students in these highly technical occupations. In 2008, there was a 40
percent increase in the number of people who either declined or resigned from a
nursing educator position due to low salary.

You can leave a community college teaching position and
make almost 50 percent more anywhere else, Tieman says. Its just not
competitive compensation.

Public universities are reimbursed by the state with the
same amount of money per student regardless of what the students major in, says
Bryan Wilson, deputy director of the State Workforce Training and Education
Board. Since 2000, the state has provided special high-demand enrollment grants
to programs that train students to work in industries that are short staffed.
However, in the current budget for 2010-2011, that funding no longer exists.
When the economy begins to improve, Wilson says, the HECB will have to renew
this funding, or unemployment will get worse instead of better.

One of the programs that benefits from this funding is the
Manufacturing and Supply Chain Management program at Western Washington University.
Its based on finding out what kinds of employees local businesses seek, then
training students to fill those positions.

Graduates earn the highest average starting salary of any of
the programs within the College of Business and Economics at WWU. Many of its
graduates enter management positions at companies like Microsoft immediately
after graduation. Haug says he sees potential for the program to expand into
the health care field, but he notes that the program may not be able to expand
beyond 50 students per year due to lack of resources.

The idea of tailoring education to match the needs of
industry is catching on around the state. The Workforce Development Council of
Seattle-King County organizes meetings between CEOs of hiring businesses and
presidents of local community and technical colleges in order to find out what
kinds of graduates are in demand and bridge the job gap. Last year, the council
used federal stimulus money to fund courses at community colleges that train
people for jobs in nursing, systems engineering, database administration,
medical coding and project management. Marlena Sessions, CEO of the Workforce
Development Council, notes that the success of these programs cant be measured
reliably until later this year, after data are gathered on the employment rate
among graduates.

Programs like the Workforce Development Council can only fix
part of the problem. Closing this jobs gap is not only necessary to fix our
short-term economic troubles, but also to help the state in the long term. A
larger health care workforce will be necessary to care for the aging baby
boomer generation in the years to come, and more computer specialists and
business management professionals will help the growing businesses that support
our local economy.

A key priority for our state ought to be a better education
system, Lazowska says. Were really strangling the states economy by not
investing in this entire educational pipeline.

Hannah Hurvitz isnt about to let that narrow pipeline keep
her out.

Im not going to let anything interfere with my goal of
becoming a nurse, she says. This is literally the opportunity of a lifetime
for me.

As demand for workers in these fields grows, our state will
have to find a way to keep up with training. Otherwise, people like Hurvitz who
have the desire and the capability will be shut out from the industries that
desperately need them.

I feel like I have a career that I am
working toward that will not just make a living, Hurvitz explains, but will
make a decent living, and I get to provide a service to the community.