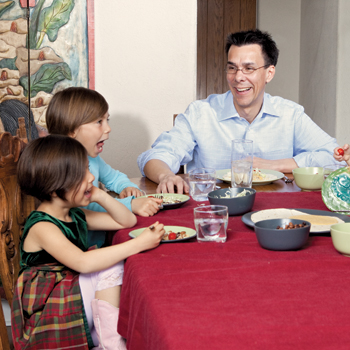 Mike Bailey can teach you how to
grow a giant pumpkin, something he does annually with his two preschoolers.
Chris Cobb can field dress a deer and owns several pairs of neon Converse
All-Stars. Brian Jacobsen, when not playing with his kids, can be found slicing
the water on a slalom ski course.

These arent the pursuits or the
details company executives share about your typical management consultant.
Nope, traditionally, those guys and gals are on the road 75 percent of their
time, hopping from city to city and project team to project team, helping
fine-tune a specific aspect of a company in a specific industry so the client
company can achieve greatness. When working for the top consulting firms like
McKinsey, IBM, Deloitte and KPMG, weekends typically involve dry cleaning your
suit, repacking your suitcase and hopping a plane to a new city.

Its no wonder that two of the
biggest challenges for consulting firms is retaining their employees and
keeping them happy. If you are working 50 to 60 hours a week, traveling three
to four days a week to different cities, its very difficult to balance that
with having a family, says Jess Scheer, senior editor of Consulting Magazine. This isnt a profession thats evolved
much in terms of work-life balance.

Bailey, Cobb and Jacobsen, three
of the 770 consultants and employees at Seattles Slalom Consulting, dont live
in that world. They are part of a fast-growing consulting firm, one that is
cashing in by delivering the work-life balance management consultants
nationwide covet. The focus is helping Slalom blaze new trails in a very
traditional and conservative industry.

And Slalom isnt alone. A number
of Seattle-based consulting businesses, from Point B to Revel Consulting to
Lenati, are among a growing number of local firms being watched and recognized
nationally as they set new courses for the industry by giving their consultants
a life.

Slalom is arguably the largest
Seattle-based trailblazer in these efforts. This years projected growth rate
is 25 percent, with a revenue target topping $150 million, says Tony Rojas,
president of Two Degrees LLC, Slaloms parent company. Just six years ago,
Slalom posted revenues of $19.6 million. Since the start of 2010, it has hired
more than 100 new employees across the companys eight offices nationwide.
Currently, Slalom has 100 open positions.

Those revenue numbers are
astounding when you know that the management consulting industry has seen
little growth since the recession started and actually experienced 4 to 5
percent declines last year, says Consulting Magazines Scheer. Double digit growth is phenomenal, he
adds. And Seattle firms like Slalom are taking market share away from the
nations top consulting firms.

Part of the reason for the fast
growth is Slaloms strategy and business plan. Started as a division of Two
Degrees, a 17-year-old accounting and financial services company, Slalom
provides management consulting and strategic IT implementation services for
Fortune 1000 and large private companies. Two Degrees co-founder Brad Jackson
tapped John Tobin, a veteran consultant with Ernst & Young and former
executive at AT&T Wireless, to launch the division in 2001. Tobin now leads
Slalom as national general manager.

Tobin didnt have to go far to
land Slaloms first client: A quick trip to Kirkland resulted in a deal whereby
AT&T Wireless/Cingular let the then-tiny firm help create a good three-year
plan on how to accomplish IT projects. At the time, AT&T was implementing
Siebel software, which was stalling strategic IT projects that executives had
deemed a priority. Tobin, who had been a consultant and an executive at
AT&T Wireless, found it easy to get in the door and later, to tap into his
vast network based on his earlier experiences.

The timing was perfect for
Slaloms founding, says Rojas. He joined his college buddy Tobin in 2005 after
leading Bellevue-based Corbis, in part because he wanted to spend more time
with his three young children. Slalom entered the consulting field just as the
story of Enrons systematic accounting fraud came to light. The big accounting
firms that were supposed to play a critical role in making sure the accounts of
large companies were clean, it turned out, were in some cases contributing to
the problem by signing off on questionable accounting practices. The scandal
contributed to the dissolution of Arthur Andersen, Enrons accounting firm, and
the passage of the Sarbanes-Oxley Act in 2002, which strengthened accounting
laws.

Big consulting companies, once the
safe choice for large corporations, saw their credibility under fire. That
situation opened the way for smaller companies like Slalom to offer their own
approach to consulting. By hiring veteran local talent (often refugees from the
big consulting firms), Slalom served the needs of both its consultants and its
clients: Consultants could get home for dinner, which kept them happy, and
Slalom could charge clients significantly less for veteran consultants than the
big firms charged for far less experienced talent. In addition, since most
costs for frequent air travel werent part of the equation, Slalom could offer
a 10 to 20 percent discount on services. Slalom recruits veteran consultants
and typically sends in one consultant or a small team of consultants. That
approach is in sharp contrast to larger national firms that tend to send big
teams that often include junior consultants who are relatively new to the
field.

I think [Slaloms] clients
realize the value of not being a helicopter consultant, Consultings Scheer says of the traditional practice of flying
in consultants to work on a project. If you are focused on one market, that
[specialization] means your reputation is crucial. And reputations can be
destroyed in a local market. Bumping into your consultant at the grocery store
or ball game cements long-term relationships, which give local firms a leg up,
he explains.

Slalom plays in whats considered
the second-tier consulting market, one that delivers strategies and tactics on
a regional or national level as opposed to operating in the elite level where
strategic management consulting firms help companies expand or deploy products
internationally on a simultaneous rollout. Slalom works on projects ranging in
size from under $500,000 to $3 million and up, says Tobin.

Slalom helped the U.S. Olympic
Committees Pressbox for the Vancouver, B.C., 2010 Olympics, a system that
allowed the press to research athletes histories and track their every move,
including time spent on social media sites. Slalom is also assisting the
Associated Press with looking for ways to reach new markets, aided eBays
launch of a new security organization, built an executive dashboard for Ross
stores and integrated four websites into one for The Gap. In many of these
deals, Slalom trades on its deep knowledge of popular Microsoft technologies
like SharePoint and Silverlight. Since Slalom is a Microsoft Gold Certified
Partner, Microsoft often recommends Slalom to implement its technology. While
early on Slalom was strictly a management consulting firm, the added technology
implementation and services provided now account for half of its business.

The evolution into a national
consulting company was not without obstacles.

In 2004, after Slaloms first
three years, Tobin hit the road, taking the local consulting concept to his
hometown of Chicago. But that first move outside Seattle was disastrous, he
says, because the home office neither gave the new unit support nor provided it
with a network of contacts needed at the beginning. It took a year of learning
and growing to get the Chicago office on track. Rather than hiring a single
consultant to open the office, Slalom now hires a team and gives a lot more
support, including additional funding. It also takes a better look at a market
and offers technology and management consulting services, something it didnt
do initially in Chicago. The new focus helped the firm open six other offices
in the past three years. We didnt want to be the one-hit wonder, says Rojas.
We want to establish ourselves as the independent, private, number one consulting
company with a local model and national communities. Thats our marathon plan.

In the shorter term, Slalom has
what Rojas refers to as the sprint planso when the economy does rebound,
were that much further ahead. Well sprint ahead in the next two years,
continue our high growth and get that pace established in our DNA. But were
also pacing ourselves for the national marathon.

As the company grows and matures,
its largest challenge is finding enough veteran consultants and keeping them
happy, just as it is for larger firms. But the teams lean and scrappy nature
means it can adjust quickly when needed. For instance, when consultants
complained that they didnt have a career path and wanted more structure, the
executive team created leadership roles and career development paths.

Such quick responses have led to
high employee satisfaction ratings, says Scheer. And so has allowing
consultants to be home for dinner, coach Little League or help pre-schoolers
grow pumpkins.