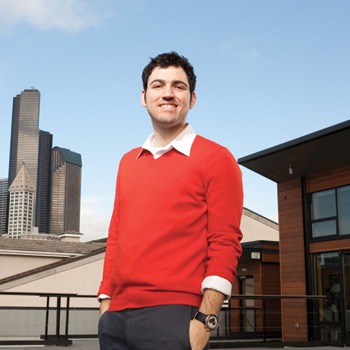 When Alfred Hitchcock’s The 39 Steps came to the Seattle Repertory Theatre last fall,
Steven Neuman and his wife, Yelena, quickly bought tickets. As new arrivals in
a city known for embracing progressive art, ideas and music, the Neumans
planned to take advantage of the many cultural opportunities they would have.
They walked into the Rep to be greeted by a full house, a completely sold-out show-on
a Wednesday evening at 5 p.m.

That’s why they moved to Seattle. Well, that
and the relatively good job opportunities, and the fact that they can walk
their dog, Boris, in the one-of-a-kind sculpture park right behind their condo
near Seattle’s waterfront.

“It makes you feel really good about the place
you’re living when the community supports the arts like that,” Neuman says.
“That play was in the middle of the week.”

A 2007 University of Oregon graduate, Neuman moved to
Spokane to begin his career at the same newspaper where he interned throughout
his college years, The Spokesman-Review.
After a few months working as a reporter and copy editor, he was laid off,
shortly before the paper went through its first round of massive layoffs. He is
hardly alone right now.

Seattle is one of only a handful of cities to which young
professionals are flocking. An increasing number of college graduates have
adopted this city known for its hotbed of technology, its success in generating
new startup companies and its openness to new ideas.

A September 2009 edition of The Wall Street Journal ranked the “Next Youth-Magnet Cities” that recent
ambitious college grads now call home. The verdict? Seattle tied for first
place with Washington, D.C. Author Richard Florida-his book, The Rise
of the Creative Class, has transformed the
way urban planners work-says Seattle is a “high-tech and lifestyle mecca.”
Seattle was also ranked City of the Year in Fast Company magazine’s “13 Most Creative Cities in the World.”

But during the toughest recession this generation will
probably ever face, it’s a wonder that 20-somethings and other young folk still
manage to afford basic necessities, let alone to travel and experience the
world at large. But they thrive on the ability to find their own way. And
they’re still coming.

Welcome to Generation Y, the casual-dressing, hardworking,
multitasking, tweeting-on-the-go demographic. Nowadays, they follow this
formula: graduate from college, choose a vibrant city with a hip reputation to
live in and launch their careers with only a car full of belongings and lofty
aspirations.

When they look for a new city, the most critical ingredient
is to find a place with lots of growing companies ready to hire. Neuman, now a
web design coordinator for Sesame Communications in Renton, followed such a
scenario. Seattle’s reputation has long been connected to the coffee shops on
every corner, the 30-plus inches of rainfall per year, the alternative music
scene and the claim to fame as home to either Dr. Frasier Crane or Dr. McDreamy
(depending on which generation you belong to). Over the past few years, that
reputation has been overtaken by Seattle’s real-world dynamism, where-if you
have the talent-you can succeed, and by extension, so can the businesses for
which you work. There’s a reason technology leaders like Microsoft, Amazon.com
and PopCap Games are successful.

Neuman says he and his wife very seriously considered moving
to Portland or San Francisco, but in the end, realized that the jobs he wanted
were here. “We liked the creative culture here, the Jewish population, the arts
and entertainment scene, and the urban lifestyle of Seattle,” he explains.

For 23-year-old Andra Wooton, the decision was rather
impulsive. The Michigan native graduated from Ferris State University and found
a job at Thermo Fisher Scientific. But after she fell victim to the research
company’s round of layoffs, she realized nothing was keeping her in Michigan.
When her best friend planted the idea of moving to Seattle, Wooton told her she
was crazy. But they were already aware of the city’s reputation, and crazy soon
turned into reality.

“We spent three months job searching before we came out
here,” Wooton says. While her friend went on job interviews, Wooton visited
several apartments and sought the help of Ajilon, a job agency in Seattle.
Ajilon set up an interview with Filter, a staffing agency that connects
creative professionals with work. It was the only job Wooton applied for and,
miraculously, she landed it. Wooton’s been living in the Capitol Hill area
since August while, ironically, her friend returned to Michigan after she was
unable to find a position.

Many observers note the tendency of the current generation
of 20-somethings to job hop. “Generation Y-ers don’t expect to stay in a job,
or even a career, for too long-they’ve seen the scandals that imploded Enron
and Arthur Andersen, and they’re skeptical when it comes to such concepts as
employee loyalty,” says Bruce Tulgan, co-author of Managing Generation Y.

Graphic designer Thomas Ryun made the pilgrimage west from
New York to gain more hands-on experience in a smaller city with similar
qualities. After the ultimate design internship for New York’s Museum of Modern
Art, Ryun and his then-fiancee, a product designer, explored their options.
Though he’d only been to Seattle once, Ryun said he always flirted with moving
to the Northwest.

“I had read about Seattle, and I had been living in New York
for five years when I realized it wasn’t somewhere I wanted to be long term,”
the 27-year-old Ryun recalls.

He took advantage of his connections in the tight-knit
design community, showing his portfolio to prospective employers every chance
he got. His hard work paid off and after freelancing for a time, Ryun now works
as a designer for Belle & Wissell Co., a small design studio in South
Seattle.

“The studios here are more forward thinking in how to evolve
and how to embrace new ideas,” Ryun notes. Today’s young people are often
looking for companies willing to listen and embrace their innovative spirits.

The Gen-Yers are also looking for diversity, both in the
people and the value systems they espouse. Such was the case with Florida
natives Susan and Michael Elliott, who moved to Seattle in 1996 in search of a
more creative lifestyle. Neither had lived anywhere but Florida, but in
visiting the Northwest, they grew to love the diversity they found here. “Back
in Jacksonville, when we told people we were vegetarians, they looked at you
like, ‘Are you sick? What’s wrong with you that you have to change your diet?’
They didn’t understand it was a conscious, moral decision,” Michael Elliott
says.

The small advertising firm the Elliotts started in Seattle,
RocketDog Communications, extends the couple’s creativity and forward thinking
into the business realm. RocketDog is usually working on 10 to 20 projects at
any given time for such clients as Disney, Mattel, Microsoft, Expedia and the
Girl Scouts of the USA.

The Elliotts were left with a tough decision in narrowing it
down to New York, San Francisco or Seattle. But the housing market in San
Francisco proved just too unbearable for struggling creatives wanting to start
their own company, and New York looked as though it would “chew you up and spit
you out,” he says. Seattle proved to be that perfect middle ground.

“The other thing was the internet in this town was literally
all over the place,” Michael Elliott recalls. “Everybody came from a tech point
of view, there were startups all over the place and companies like Microsoft
were here.” Telling their friends they were driving cross-country to Seattle
because of its creative allure sparked questions about how crazy the two really
were.

“But now our friends say, ‘You own your business? You’re
thriving in a city like Seattle? That’s awesome,'” Susan Elliott beams.

So what happens to the city’s economy when so many young
people bring in a particular set of skills and even create jobs for themselves?
“Ideally, this elevates the role of design in Seattle,” Ryun says. “There are a
lot of good things going on here. It’s definitely a positive addition to the
city.”

Ken Myer, the outgoing president and CEO of the Washington
Technology Industry Association, believes that this trend of young people choosing
Seattle is raising the quality of work that comes out of our city. He also
wonders how much influence and power Generation Y brings with it.

“People are very entrepreneurial here,” Myers notes. “People
are willing to take risks because they have a tight community they are a part
of. This gives you people to get advice from and people to fall back on when
you have problems. That type of environment breeds a good deal of risk taking.”

Whereas baby boomers tended to put priority on their
careers, today’s young are more likely to look to a broader network of friends,
family and community to support their entrepreneurial endeavors.

And they have a new tool set of social networking
technologies to maintain those wide-ranging relationships. “This generation has
grown up with the tools to naturally embrace” broad social networks, says
Myers, pointing to such community- building tech companies as GeoPage, BuddyTV
and Facebook, which place a high value on community.

If these talented young people are so important to Seattle’s
future growth, what can be done to keep them coming, particularly in a weak
economic climate? In part, it’s a question of choices.

“No one ever feels like they have job security right now,”
says Steve Neuman. “You can’t give your soul to the company. You can’t trust
them.” But as long as companies like Amazon continue to grow, there is an
expectation that some job somewhere will come along.

Kristin Knight, CEO of the staffing agency Filter, says that
many of her 200 corporate clients have begun looking to hire new full-time
workers from among Filter’s ranks of 10,000 members, many of whom are design
professionals. Knight believes the lower cost of living in Seattle compared
with alternative creative hubs like San Francisco and New York City will keep
young people attracted to this region.

A better supply of affordable housing-because many landlords
are lowering rents or offering a month rent-free to lure in new tenants-is
helping to keep young people here. The Neumans, for example, have found they
can afford to live comfortably in lower Queen Anne, close to downtown. “There’s
a lot of supply right now and not that much demand,” Neuman explains. In 2009,
Seattle’s cost of living index was 122, compared with Manhattan’s 218, D.C.’s
140 and Portland, Ore.’s 120, according to the census bureau.

In choosing a new home base, Neuman says he understood the
creative opportunity is here. “The technology community is here. It’s similar
to San Francisco’s climate. But there are young companies, established
companies and everything in between.”

In the early years of the 21st century, Seattle has earned
the reputation that New York enjoyed with previous generations: If you have
talent, if you’re willing to work hard, put in long hours and take criticism
well, you can make it here.

Says Neuman, “Ultimately, it was just an
easier market to enter.”