The Bike-to-Work Movement Is Growing in Seattle, But It Needs More Support From Employers

Savvier employers and safer streets are needed for the Seattle cycling commute to reach higher gear. 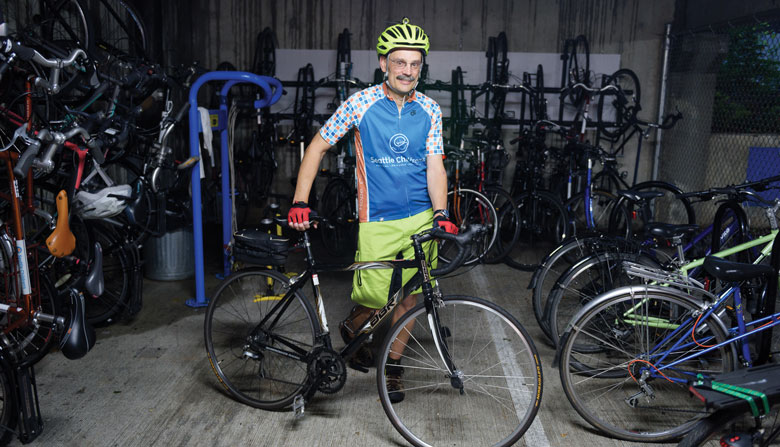 NO-CAR ZONE: Mark Del Beccaro is SVP and chief medical officer at Seattle Childrens, which has had a robust biking program for two decades. Photo by John Vicory.

For Jean White, regional trails program manager for King County, the transition occurred 18 years ago, when she realized she could bicycle to work from Ballard to downtown Seattle in the same time it took to ride public transit. She wouldnt have to worry about missed buses, late buses and frequent stops.

Now she bikes about nine miles each way between her current home on Phinney Ridge and her office at King Street Center, next to King Street Station in Pioneer Square. Pedaling along the waterfront, she takes in views of Mount Rainier and sees bald eagles soaring and harbor seals swimming before she pulls into work, where she can stow her bike in a spacious storage area and take a shower before heading to her desk.

Who wouldnt do this? she muses, reflecting on her route to work. Its great.

White is a longtime practitioner of what has become routine for a dedicated set of the Seattle workforce. From upgrading bicycle storage to paying workers to get out of their cars, more businesses encourage alternate modes of transportation to promote a healthy lifestyle and protect the environment while also reducing motor vehicle traffic.

In fact, a survey by Commute Seattle, an organization that seeks ways to improve mobility in the region, found that while the downtown Seattle workforce grew by 45,000 people between 2010 and 2016, 95 percent of those extra commute trips were absorbed by alternatives to driving alone, such as walking, taking the bus, ride sharing and biking.

Commute Seattle says about 3 percent of Seattles downtown workers bicycle to work. That amounts to roughly 7,500 people. Bike commuters add that if businesses and city planners do even more to ensure cyclists comfort and safety, more will follow suit.

Catherine Hennings, who serves on the executive board of the Cascade Bicycle Club, the nations largest local bicycle club, says a lack of adequate support facilities remains one of the greatest challenges to getting more people to bike to work. Hennings bikes several days a week to her office at Path, the global health nonprofit based in South Lake Union.

If its a day to ride my bike, she insists, it doesnt matter what the weather is.

But theres the rub. While Path does provide space for bike storage and showers, the area isnt big enough for storing nice work clothes. Hennings carries her office clothes back and forth from home to work. Furthermore, theres only one electrical outlet in the storage room a problem if more than one person needs to dry her hair at the same time. Hennings is lobbying Path to add clothing storage to make things easier for cyclists. Having senior executives among a companys avid bicycling population does help to make things happen. When Lease Crutcher Lewis was headquartered at a building on Spring Street downtown, cyclists had to park their bikes outside and take turns using the companys single shower.

We have a culture of a lot of people who ride bikes here, says EVP Jay Sorensen.

That group includes several senior execs, so when the company decided to buy a share of the Union Stables building on Western Avenue at Blanchard Street and remodel the century-old timber-and-masonry structure as its new headquarters, it addressed the issue head on. Working with co-owner Allegra Properties, Lease Crutcher Lewis had the building it once housed 300 horses used to pull streetcars, fire engines and carriages outfitted with a bike room accommodating 20 bicycles and plenty of showers. The building is certified LEED gold and the office buildout LEED platinum.

Sorensen, who bikes about five miles from Magnolia to his office, says its more efficient than riding the bus. He also likes being able to take off whenever he wants.

Too, the bicycle accommodations are a showpiece for clients during the occasional parties Lease Crutcher Lewis hosts on its rooftop terrace. They serve as inspiration to other customers and have even created a few biking converts among employees.

You couldnt do it without the [bike] facilities that weve put in, Sorensen notes.

White says the countys King Street Center facilities for cyclists have made all the difference for her as well. When she worked in a downtown high-rise, she had to schlep her gear more than 40 floors up, using two elevator banks, and she changed clothes in a bathroom. Now she can secure her bike in a dedicated space that accommodates 80 to 90 bicycles. Showers and lockers allow bikers to stow their clothes and shoes and arrive at the office fresh.

You can ride to work professionally, she says. It makes a big deal to have the right facilities.

Christof Koch, president and chief scientist at the Allen Institute for Brain Science, used to live in Pasadena, California, where the infrastructure and way of life simply werent friendly to bike commuting. When he moved to Seattle, Koch gave his Mini Cooper to his adult son and began cycling to work every day first from Pioneer Square and now from Matthews Beach, which makes for an 1112-mile trip each way. On weekdays, his big yellow messenger bag is packed with work clothes and rowing clothes. On certain Saturdays, he packs special clothes for a night at the opera.

Koch spends his days directing research that might one day teach scientists how to connect the human brain to electronic devices. He is also one of a large cadre of bicyclists who have given the Allen Institute the distinction of being the workplace with the highest percentage of bicycle commuters among Seattles large employers, with 21.3 percent of workers pedaling to work.

Whats good about Seattle is that there are lots of physical barriers between bikes and traffic, says Koch. Those things really make a difference; you really feel safer here.

Seattle has indeed made strides in that area, from incremental improvements to the Burke-Gilman Trail to the ongoing extension of the Second Avenue cycle track that separates bicyclists from motor vehicle traffic and provides separate traffic lights for bicycles, so motorists turning left dont compete with the bicyclists.

Still, the perceived danger of cycling downtown continues to discourage many commuters from taking their bicycles. One Center City, an advisory group, argues that new bicycle lanes and other improvements in the downtown core would result in a 160 percent jump in daily bike trips downtown by 2023. Extensions now underway include Pike Street and Pine Street bike lanes from Second Avenue to Broadway on Capitol Hill, bike lanes on Seventh and Eighth avenues and a connection south to Dearborn Street. Additional expansions advocated by groups such as the Cascade Bicycle Club could include a two-way protected bike lane on Fourth Avenue, which would make for a more comprehensive biking network downtown.

Cycling accidents have sent Koch to the emergency room twice once when he tried to avoid a hole in the road around Pioneer Square and once when he drank too much pinot noir, he says. Even so, he continues to commute by bike undaunted. He enjoys breezing past the Seattle gridlock while he slips into a meditative state on two wheels.

Among Seattle bike commuters, men outnumber women by a ratio of about 2 to 1. Depending on the surveys being cited, women make up 28 to 31 percent of all cyclists.

If we want to expand whos biking, White asserts, youve got to get the women out there.

By far the biggest worry women have about cycling is distracted drivers, cited by 79 percent of the women surveyed in a University of Washington study. White explains it was only after she tested a route that she started biking to work. She has built courage over the years, but adds women tend to be cautious about taking on the risk of biking in traffic. Many believe that better bicycle infrastructure would help address that challenge.

Another issue of particular concern to women is grooming, including having to carry a change of clothes, worrying about helmet hair, and appearing clean and fresh. These challenges are not lost on Seattle Childrens, where 73 percent of the hospitals workers are female.

If we want to increase bike trips, we need to be compelling to women, says Seattle Childrens Director of Transportation Jamie Cheney. They tend to have more interest in safety and comfort.

Seattle Childrens has had a comprehensive and robust transportation program for its employees for 20 years, Cheney says. And thats by necessity. Nestled in a residential neighborhood east of the University of Washington, the hospital campus doesnt have much room for parking. Cheney says it would rather dedicate what limited real estate it has toward fulfilling its mission: caring for children. Furthermore, because children are vulnerable to poor air quality, it only makes sense that Childrens does its part in reducing car-exhaust emissions.

Seattle Childrens developed a plan that makes it easy for employees to arrive in any other way than a single-passenger car. It rewards workers with $4.50 for every day they come to work without a personal vehicle, and it subsidizes the cost of bus passes and vanpool rides. It even provides employees with a plan that outlines their best routes to work.

The bicycle component of its program is particularly noteworthy. If workers pledge to pedal to work at least twice a week, Seattle Childrens will give them one of its 300 loaner bikes, complete with locks, lights and helmets. An in-house bike shop even offers tune-ups and Bicycling 101 fix-it classes.

It all makes for a turnkey bike experience, Cheney says, allowing the bike-curious to test out the lifestyle before making a full investment. And it works: All 300 of the hospitals loaner bikes are in circulation and many employees are on a waitlist. Seattle Childrens also contributed money to improve the Burke-Gilman Trail, which snakes past its campus.

About 630 people or 9 percent of hospital employees cycle to work. Among them are Mark Del Beccaro, SVP and chief medical officer, and his wife, Dawn Cotter, director for oncology and immunology. Though sometimes they carpool, when they do bike, they travel about seven miles from the Leschi neighborhood.

Del Beccaro isnt so much interested in the $4.50-a-day rebate; he donates that back to the hospital. But he believes in the hospitals endeavor. I think its important we keep as many cars off the road as possible, he says. Ill definitely go out of my way.