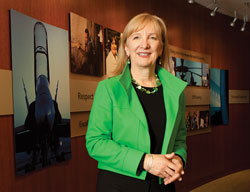 During Marcia Masons 19 years as vice president of human resources at Esterline, the Bellevue company completed more than 35 acquisitions and divested itself of more than a dozen operations. After first-year integration, all acquisitions were accretive to earnings, which is a testament to the huge integration task Mason spearheaded with each acquisition.

A supplier to aerospace and the defense industry, Esterline employs roughly 12,000 people worldwide, It operates in 13 states, as well as in Canada, China, the Dominican Republic, France, Germany, India, Japan, Mexico, Morocco and the United Kingdom. Only a small number of its employees work at Bellevue headquarters, which makes Masons job all the more challenging.

Mason says the key to making each acquisition/integration smooth was meeting in person with new employees quickly, answering all their questions honestly, and doing everything she said the company would do as rapidly as possible.

We always offer a warm welcome and convey as much info as they want to have, she says. One thing weve learned is that acquisition means change, and early on we let people know why change is necessary and explain how they will be involved. Also important: offering a clear timeline of when things will happen.

Mason is quick to credit a strong team in the field, and entrust them with responsibility at the local level. Their support and involvement have helped her roll out a talent management and talent development system, and deliver a consistent compensation strategy and philosophy. Mason also created a comprehensive total reward and benefits program that varies by country and by company.

An attorney by training, Mason was promoted last summer to general counsel, Esterlines first. It was a move Esterline determined was an important priority given the firms international expansion. In announcing Masons promotion, Esterline CEO Brad Lawrence said: Were fortunate to have such a strong internal candidate with expertise in business and employment law as well as deep knowledge of our company.