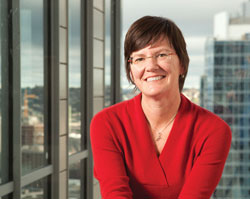 KATHLEEN PHILIPS signed on with Zillow Inc. as general counsel six months before the Seattle real estate Web property launched its initial public offering in July 2011. She jumped at the chance to rejoin former colleagues Spencer Rascoff, Zillows CEO, and Amy Bohutinsky, its chief marketing officer, with whom she had worked some years before at Hotwire.

Philips quickly beefed up the companys legal team and oversaw the only successful IPO by a Washington company in 2011. Because of her diligence, Zillows IPO registration statement was declared effective by the Securities and Exchange Commission after only 93 days from the date of initial filing, which allowed the company to take advantage of volatile capital markets and minimize costs.

Although she will tell you part of the IPO fast track was directly linked to the copious amounts of ice cream and fun served up at the 3 a.m. meetings at the printer prior to the filing, colleagues credit Philips positive attitude and sense of humor, as well as her desire to deliver what shes promised, as keys to her success.

My secret to happiness is always taking on new things, because then Im constantly learning and growing, Philips says. Im a far different executive because of all the different things Ive gotten to do at Zillow.