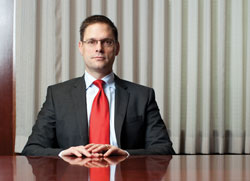 EZRA ECKHARDT was appointed president and chief operating officer of Sterling Bank in October 2009, not long after the FDIC presented the organization with a cease and desist order suggesting it had engaged in unsafe or unsound banking practices and ordering the bank to raise at least $300 million in new capital.

Eckhardt, who had joined the bank as chief information officer in 2004 after working at Honeywell, Microsoft and the U.S. Army, had his work cut out for him. Over the next 10 monthshe says it felt like 10 yearsEckhardt, working closely with a new leadership team under CEO Greg Seibly, had more than 200 meetings with investors across the country, and raised $730 million.

That success was dependent on two decisions Eckhardt played a key role in making more than a year before. One was to put a new focus on core deposits, such as consumer and business checking accounts so the bank would have access to lower cost capital. A second was to use the increased liquidity from those deposits to do some serious house cleaning among the banks troubled real estate assets. We would open these doors and there would be tarantulas all over the room, says Eckhardt. We could have pretended we didnt see them, but we did what had to be done.

In January 2009, the bank wrote off $450 million in bad assets. Eckhardt, who is in charge of IT, marketing and communications, lending, and all back office functions for the banks five-state operation, cut staff to reduce costs. Those decisions attracted investors and laid the foundation for the banks remarkable recovery to the point where it is now healthy enough to acquire other banks and focus on its goal of repositioning itself as a commercial bank.

Eckhardt is a graduate of the U.S. Military Academy and a certified master black belt in the Six Sigma continuous improvement program. He says his military experience taught him to draw the best through leading by example, trusting subordinates and developing creative thinkers who can be part of a strong team.