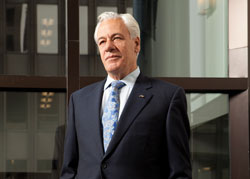 His formula helped Seattle-based Expeditors International grow into a global transportation logistics giant with $6.2 billion in annual revenues and $386 million in profits by 2011. Expeditors, co-founded by Rose in 1981 with James Wang and Glenn Alger, has grown from an ocean forwarder with a single office into a Fortune 500 company with 13,000 employees and more than 250 offices around the world.

Rose made large and early investments in critical elements, including a worldwide network of branches and an impressive information technology operation. He also believes in a strong balance sheet. At the end of the day, we are one of a very few companies with zero debt, lots of cash and are still making money, says Rose.

Rose is most proud of how, by paying attention to the little things, working hard and respecting customers and employeesExpeditors has a no-layoff policyhe has created a company where employee tenure is counted in decades, where the professional dress code is impeccable and the worth ethic unparalleled.

Its paying attention to the little things, Rose says of the secret to his success. Its not letting go of your values, and of the tenets of the company. He recalls an instance when an employee saw him picking up staples off the floor and asked why the CEO was bothering with something so trivial. I said it was because the staples get caught when the cleaning crew comes in, and they rip the carpet. When it comes to picking up staples, Rose says, everyone should be.