Third Avenue in Downtown Seattle Is Ready for a Facelift

Downtown Seattle's busiest street is primed for a makeover 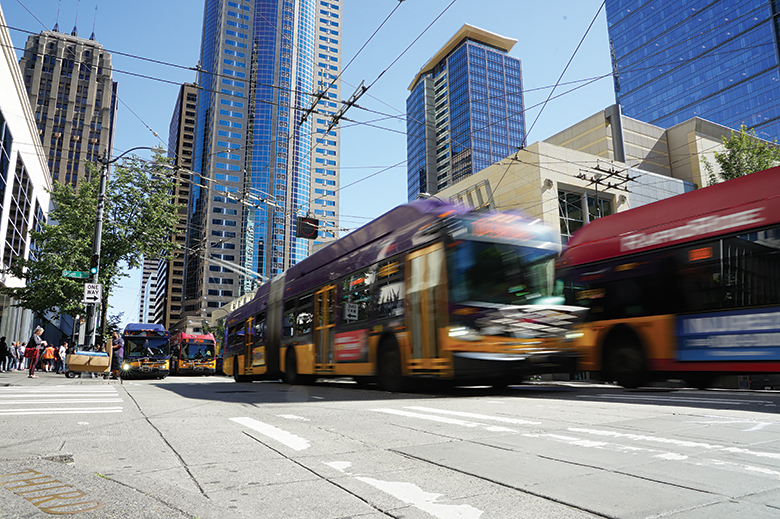 Anyone whos recently walked or driven on Third Avenue in downtown Seattle knows how unattractive and unsafe the street is.

Narrow sidewalks, rampant traffic congestion and a constant flow of transients combine to create an unfavorable environment. About 290 buses each hour ferry 52,400 riders every day on the street, which is one of the busiest transit corridors in the United States.

The Downtown Seattle Association has launched an effort to fix it. A recently released report revealed that several big ideas are on the table, including creating a three-lane street (its now four lanes, two in each direction); adding a median in the middle of the road where pedestrians could catch buses; adding a transit shuttle and hub; and diverting some bus traffic to Second and Fourth avenues. Earlier this year, Metro added more than 20 buses onto Third Avenue.

Third Avenue should be a welcoming retail experience with buildings that foster public life, the report says, adding that retail options are inadequate and that the street often feels unwelcoming and unsafe. Several quick wins have already happened on the street, including removing phone booths, repairing lighting, trimming trees and cleaning bus stops.

The report notes that Third Avenue lacks significant parking and public spaces and that office and government buildings dominate the corridor.

Several developments and investments are already in the planning stages, including $500 million of private investment, $30 million in pedestrian improvements on Pike and Pine streets at Third Avenue and plans for 1,545 new residential units in the next two years. Plans also call for widening sidewalks from their current 19 feet to between 27 and 33 feet.

The project has no distinct timeline, though diverting buses could happen as soon as 2021 when light rail service expands. Funding also is unclear. The report grew out of a Third Avenue Vision task force, which met numerous times in 2018.