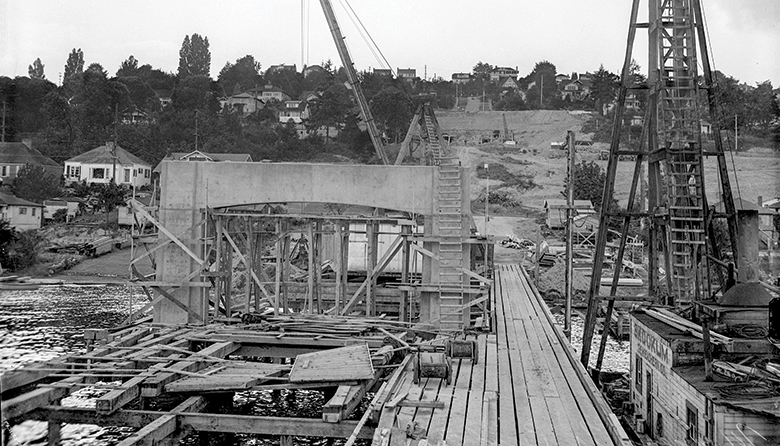 The original Lake Washington floating bridge was expected to handle an average of 2,800 cars daily when completed in June 1940. It connected Seattle to the east side of the lake via Sunset Highway, which was later replaced by Interstate 90. The photo above depicts construction of the western approach to the floating bridge. The idea of a floating bridge across Lake Washington was proposed originally in the 1920s by engineer Homer Hadley.

The lake bed was too soft for piers and a suspension bridge was deemed too expensive, so Hadley floated the idea of connecting hollow barges end-to-end. The original Lake Washington Floating Bridge was renamed the Lacey V. Murrow Bridge in 1967. It closed in 1989 for reconstruction and, following a severe storm that sank portions of the old bridge, the current incarnation of the I-90 floating bridge finally opened in 1993. At 6,620 feet, it ranks as the second-longest floating bridge in the world. Today, it carries a daily average of some 66,000 vehicles eastbound over the lake. Westbound traffic is carried by the adjacent Homer M. Hadley Memorial Bridge, which opened in 1989.