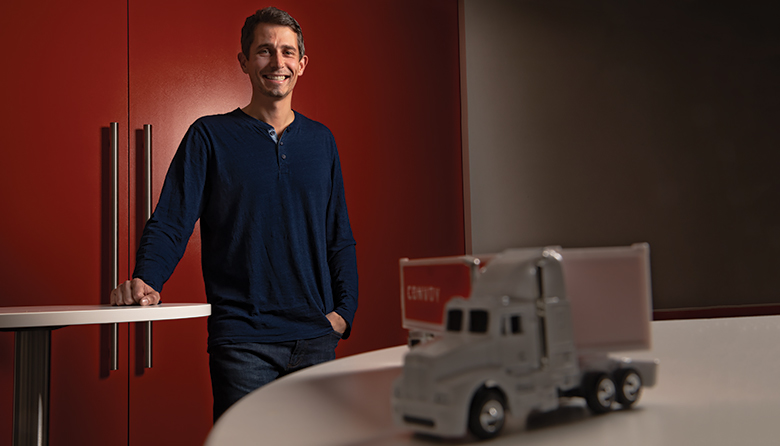 One day about four years ago, Dan Lewis walked into a Marysville truck stop, clipboard in hand, brimming with ideas on how to revolutionize the trucking industry.

What better place, the would-be tech entrepreneur thought, to talk to truckers about their livelihoods? Within seconds of his arrival, he realized hed made a tactical error. The place fell silent. Just about every customer was staring at him and his clipboard, including the person behind the cash register.

Am I going to be the guy going table to table bothering these nice people enjoying their meals? Lewis recalls asking himself. If the first one looks at me funny and doesn’t want to talk to me, do I think anyone else will talk to me?

So, Lewis did what anybody would do. He backed out, retreated to his car and rethought his approach.

He came up with a better idea: He approached truck drivers while they were buying fuel, checking their tires or updating their logbooks. Lewis offered a $5 gift card for five minutes of their time. That broke the ice.

Lewis, who had left his job as Amazons general manager of new shopping experiences, went to truck stops, warehouses, talked with friends and family in the shipping and hauling business and reached out to people in the industry via LinkedIn. He found an incredibly inefficient business, one where truckers drive empty or half-empty trailers across the country and suffer interminable waits at freight terminals.

Truckers felt they were working hard but no one had their backs. They said the traditional brokerage companies the ones who booked their loads often didnt seem to have their best interests in mind.

I remember at that first stop someone said, Hey, you know, I have a love-hate relationship with my truck broker. And they walked me through it, Lewis explains.

From those conversations, Lewis and his friend, Grant Goodale, another Amazon veteran, in 2015 launched Convoy. Now a fast-growing Seattle tech company, it has raised some $265 million in capital and is valued at more than $1 billion also known as unicorn status. Lewis is the companys CEO; Goodale is the chief technology officer.

Convoy has created an online marketplace that can be accessed via a mobile app, allowing haulers and shippers to connect and schedule loads directly. The companys app allows mainly independent truck drivers and small carriers to bid 24 hours a day, seven days a week on loads that shippers need delivered. The service is free for truckers, but shippers are charged a fee.

Convoy started working with carriers and shipping companies in Western Washington in 2015 but expanded region by region until going national a year and a half ago. The company, headquartered in downtown Seattle, opened a second office in Atlanta this past October.

Two years ago, Convoy employed 100 people. This year, its workforce exceeded 500. Polaroid pictures of the newest hires dot one wall of its Seattle office.

About 63 percent of all freight transported in North America in 2017 was hauled by trucks, according to the U.S. Department of Transportation. Trucks carried $721 billion worth of goods, far outpacing rail at $174 billion.

Its this massive industry thats fragmented and everybodys trying to get ahead, but its with fax machines and phone calls, Lewis says. And honestly, theres a lack of trust between the parties, because its opaque, and theres not a lot of transparency in data and pricing. Digital freight brokerages, as Convoy and competitor Uber Freight are known, are ushering in an era of simplicity, agility and efficiency to the archaic truck-freight brokerage business, says Silpa Paul, a lead analyst for the commercial vehicle industry at consulting firm Frost & Sullivan.

Traditional brokerages are inefficient because they rely too much on telephone and email and lack real-time knowledge of trucks and loads, Paul says. That leads to lots of trucks driving empty or with partially loaded trailers. On top of that, brokers charge high commissions, making the traditional way of doing business expensive.

Kent-based National Transportation Services Inc. (NTS) is one of the trucking companies that works with Convoy. Co-owner Guri Bhathal has found Convoy to be both incredibly efficient and effective.

None of the other brokers have the app like they have, Bhathal says. I can just go to my phone and check which loads are available, then I put a bid on it. The best thing about the app is that the other brokers only work Monday to Friday. Convoy, they are 24-7.

Bhathals company started slowly with Convoy about a year and a half ago, hauling only a handful of loads found through the app. NTS is now doing between a quarter to a third of its business with Convoy.

Its quickly become a mutually beneficial relationship. Convoy has directed some dedicated accounts to NTS, Bhathal says. Thanks to those routes, the company has expanded from 50 trucks to 95, he says.

Nationally, Convoy works with more than 35,000 carriers, 100,000 drivers and about 500 shippers. Lewis and Goodale wanted to create a company that can improve supply-chain operations while lowering costs and reducing waste.

Nearly 40 percent of trucks on the road are empty, with drivers heading to pick up freight or driving back from unloading it, Lewis says. Drivers also often arrive at a destination and are forced to wait for hours for a terminal to open, so goods can be loaded or unloaded another inefficiency.

Convoys app aims to solve these problems. For instance, Convoy can locate a load for a driver to haul from Seattle to Yakima, and then locate a load in Richland that the trucker can drive back to Seattle. The database and related algorithms also can determine the best arrival time at terminals.

If all we focus on is reducing waste in those categories, we will create an incredibly successful business, Lewis says.
By using technology to decrease wasted miles, time and fuel, Convoy ensures the industry can keep on truckin’.