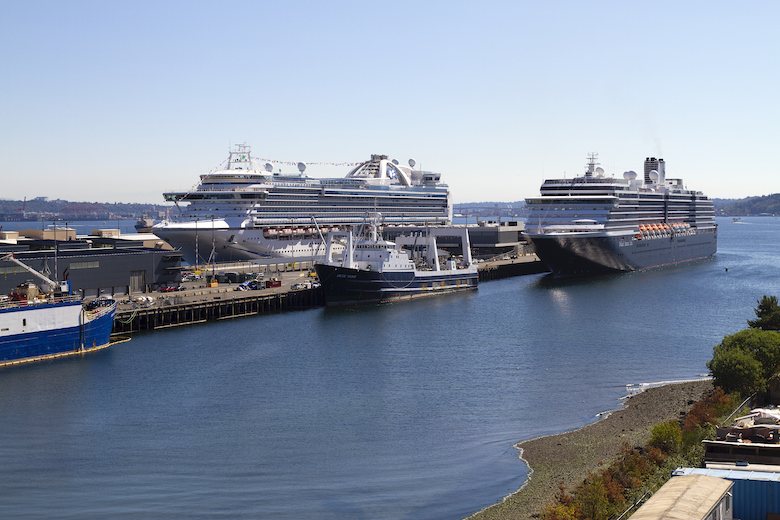 In a blow to Seattles nearly $1 billion cruise-ship industry, one of the major cruise lines serving the city, Princess Cruises, has announced that it is suspending operations of its 18-ship fleet for a 60-day period beginning March 12 in response to the unpredictable circumstances surround the global spread of the coronavirus.

The Grand Princess is now under quarantine in Oakland, California, due to a COVID-19 outbreak onboard. The planned April 1 Seattle port of call for that vessel was cancelled yesterday, March 11, by the Port of Seattle, as is the planned April 5 port of call of another cruise brand, the Celebrity Eclipse.

Port of Seattle spokesperson Peter McGraw says one other Princess Cruises ship, the Ruby Princess, would make one less call in the city under the 60-day pause ending May 10. “This is a rapidly evolving situation, and well continue to keep a close eye on all developments,” McGraw says. The Ruby Princess was scheduled to dock in Seattle on May 9 and is now slated to return on May 16 at Terminal 91.

In the interest of doing whats right and upholding our core values, Im regretfully announcing a 60-day pause of our Princess global ship operations, Jan Swartz, president of Princess Cruises, said in a video posted on Twitter. This perhaps most difficult decision in our history because we understand the incredible impact it has on countless people, our guests, our 35,000 teammates, our over 100,000 travel advisers and business partners and all the destinations [380 ports] we visit.

We will take our fleet of 18 ships out of service and reset the environmental conditions onboard, incorporating all the great learnings from the worlds public health experts, Swartz adds.

Princess Cruises is a subsidiary of Carnival Corp. which also operates a number of other cruise lines serving the Seattle area, including Seattle-based Holland America Line and the ultra-luxury cruise line Seabourn. The coronavirus (COVID-19] outbreak and its ripple effect across the tourism industry has already put a big dent in the business of many Seattle-area businesses.

It’s really bad, Rogers says. I’ve had to reduce all hourly employees down to 30 hours a week. Salaried employees are getting a 25% reduction in pay. Im having to make hard decisions to weather this crisis out.

The future fate of other cruise-ship lines serving Seattle is not clear. At least one other Carnival-affiliated line, Sebourn, said as of today it plans are to continue operations as scheduled, however.

Seabourn doesnt have substantial fleet operations in Seattle though our offices are headquartered [in Seattle], says Brian Badura, spokesperson for Seabourn. While advisories are in place, we are open for business and look forward to welcoming guests who choose to take a cruise vacation with us.

Roger Frizzell, spokesperson for Carnival, says the company has been extremely proactive in dealing with the coronavirus crisis, adding that its cruise lines in January enhanced health screening and boarding protocols to deal with the outbreak, including prohibiting any guest from boarding ships if they have traveled to China, Hong Kong, Macao, South Korea, part of Italy and other quarantined zones within the prior 14 days.

Our brands are also in the process of adding temperature checks through hand-held devices or thermal scanners, Frizzell adds. More recently, cruise like leaders, including our chief executive officer, met with Vice President [Mike] Pence and the CDC [the federal Centers for Disease Control and Prevention] to suggest sweeping enhancements to a number of different areas of our screening and boarding processes as well as our broader health-management systems.