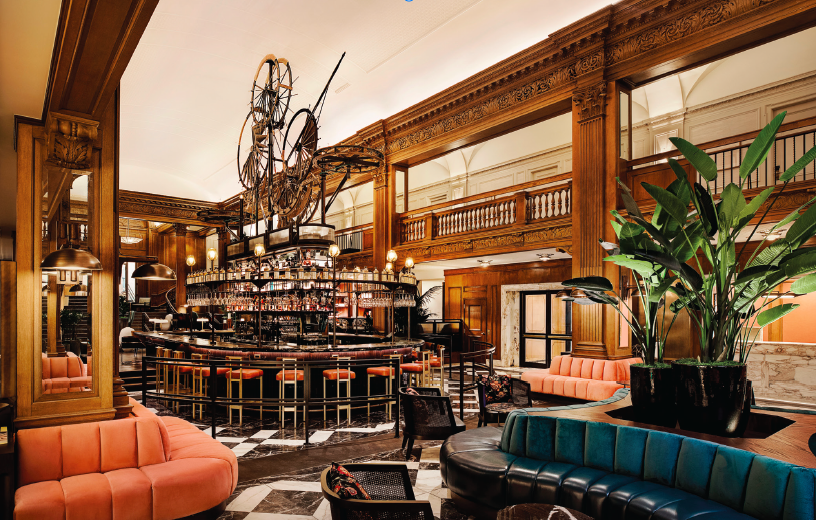 Behind a secret door disguised as a bookshelf lies a dimly lit hidden bar at the Fairmont Olympic Hotel.

Sip a cocktail in a plush lounge chair near the fi replace or arrange for your groups bottle of liquor to be tucked away in one of the private lockers lining the lounge. For a moment, imagine yourself in an intimate speakeasy of the era from the Olympic Hotels early days, nearly 100 years ago.

Th e hidden spirits room is just one feature of a large renovation the historic hotel is unveiling in stages this year. In the spring, the Fairmont Olympic finished the reimagined lobby, which includes a new Olympic Bar as a central gathering spot. Th e cozy lounge behind the bookcase (yet to be named) and a renovated Georgian Room restaurant will also soon open to the public. Th e restaurant will have a new culinary concept, decor and name.

Design elements of the recent renovation emphasize both history and community. The hotel opened in 1924 at Fifth and University on a site that originally belonged to the University of Washington. While it is still known for hosting wealthy travelers and famous dignitaries from around the world, its also always been a gathering spot for Seattleites. Its where your grandmother got married and where you met friends for a holiday afternoon high tea. The hotels opening nighguest list in December 1924 was comprised of people with Seattle addresses. Community bonds financed its original construction.

Th e Seattle Times held a naming contest among readers, and a public committee chose the name The Olympic. To stay true to the hotels local significance, Fairmont Olympic General Manager Sunny Joseph wanted the renovation to create new gathering spots for Seattleites to enjoy the historic hotel. If you cant stay in a $500 or $600 a night room, you can still have a pint of beer for $9, Joseph says. The hotels real owner is the community.

Renovation comes as the Fairmont Olym-pic and the rest of the local and national hospitality community climb back from the pandemics devastation. Though the hotel was only closed entirely for two months in 2020, guest numbers fell to record lows. As of June of this year, the hotels average occupancy rate was 30%, whereas the Fairmont Olympic averaged 90% before the pandemic. Hotel leaders hope the renovated lobby and restaurants signal a new chapter, as leisure, business and group travelers hopefully begin to see the world again.

Memorial Day weekend marked a positive start. Downtown Seattles hotel occupancy rate on the Saturday of the holiday weekend rose to 80% for the first time since the pandemic began, according to Visit Seattle data.

We can see signs of hope, Joseph says. I think the worst is behind us.

This recent renovation is the last stage of a series of projects to update the Fairmont Olympic. In 2016, the hotel spent $25 million to remodel guest rooms and corridors. Construction on the most recent phase, which cost an additional $25 million, began in January 2020. Though work halted altogether for several months due to the pandemic, the project resumed in July, and the empty hallways and rooms last year provided a beneficial window for construction.

The new lobby creates purpose in an area that Joseph always thought was underutilized. As the centerpiece of the room, the Olympic Bar brings locals and hotel guests together for casual food and drink. Until the hotels new restaurant reopens to diners (The Georgian is still closed for renovation) the bar also hosts the Olympics classic afternoon tea. Bar seating continues in a space some call the library, an area off the main room that features rich woodwork and tables for groups and couples.

The Olympic Bar draws inspiration from the hotels historic maritime theme. The original Olympic Hotel logo, which can still be seen on the elevator doors, features a ship. A massive art installation hanging above the Olympic Bar resembles the parts and movements of a boat through eight motorized wheels. The piece uses metal structural poles, wooden elements, sails and rope. An engineer flew in from Barcelona to assemble the 400 parts in a specific sequence that cannot be altered. Wheels of the art piece turn constantly, creating ocean-like movement and reflecting shadows on the hotels vaulted ceiling.

Visitors and locals can now take in the ho-tels past by strolling through the new history walk, a collection of artifacts lining the walls of the mezzanine above the lobby. According to HistoryLink.org, rooftop spotlights greeted 2,000 people decked out in their finest clothes on opening night. Guests marveled at marble floors, walnut furniture and the same ornate chandeliers that still hang in the hotel today. Bellhops wore gold-buttoned uniforms and Chinese maids in green silk outfits served attendees. Guests spending the night could select rooms ranging from a single to a deluxe suite that included a maids room, kitchen, dining room and parlor.

With its luxurious rooms and lobby, the Olympic became the gathering place for high society. Beginning with Herbert Hoover, almost all presidents and numerous presidential candidates have stayed in the hotels presidential suite, though Donald Trump never paid a visit. Joe Biden has yet to come, but Joseph insists that the Fairmont Olympic will be his address of choice when he visits. Celebrities such as Elvis Presley, John Wayne, Joan Crawford and Bob Hope spent nights at the Olympic. Overseas royalty, including Emperor Haile Selassie of Ethiopia, Prince Philip of Great Britain, and Emperor Akihito and Empress Michiko of Japan, all graced the Olympic.

The hotels rich history is now captured through framed articles and documents from University of Washington archives displayed on the hotel mezzanine. Among the relics are a 1925 expense report, a daily room rate ledger and a Seattle Times ad urging locals to try out the restaurant and bar. A menu from the restaurant shows afternoon tea priced at 75 cents. A love letter on Olympic Hotel stationery is dated 1951 and was sent by a former hotel employee to her husband stationed in Korea.

History also shines through in the hotels renovated common areas. Many of the restoration details required intricate work and research in order to maintain the historic integrity. Bringing the hotel up to modern safety standards and ADA compliance rules demanded creativity. Designers matched new pieces with original wood to raise railing heights and reduced steps in rooms with multiple levels.

Its a complex, old building with a lot of quirks and challenges, says MG2 principal Shannon Suess.

Original chandeliers weighing 300 pounds were moved from the Georgian Room to a new location in the foyer adjacent the Spanish Ballroom. Workers wrapped each individual crystal and then rehung them one by one to avoid damage.

Renovation uncovered original terrazzo and marble flooring on staircases and staircase landings that had been hand laid by artisans from Italy in 1924. For half a century, the beautiful floors were hidden under carpet. Though designers had ordered replacement carpet, they shifted gears when they saw the restoration potential. Workers painstakingly refinished the original floors.

Now, visitors can walk on century-old marble as they use the staircase, perhaps imagining themselves as one of Olympic Hotels original high society guests.