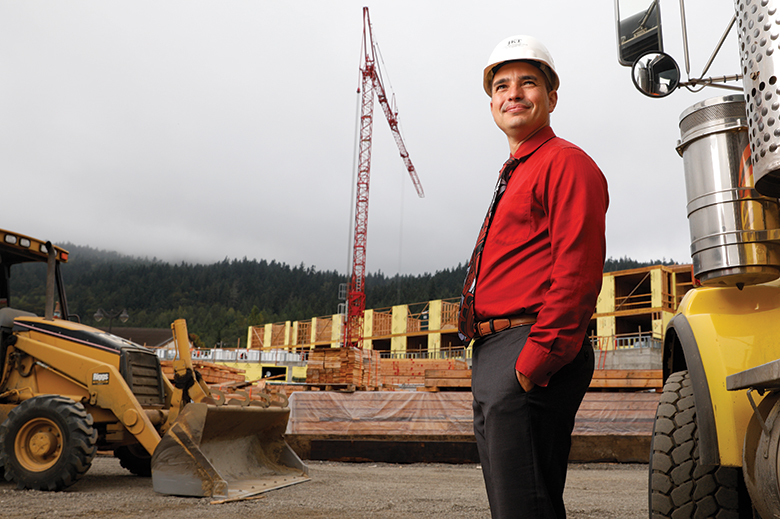 Kyle Johnson had to camp in a tent and conduct business from a library as he worked to establish one of the largest Opportunity Zones in the nation.

Johnson, executive director of the Jamestown SKlallam Tribes Economic Development Authority in Sequim, visited tribal heads and rural leaders on the Olympic Peninsula to help cobble together a partnership consisting of five Native American tribes; Jefferson and Clallam counties; the cities of Port Angeles, Forks and Sequim; the Port of Port Angeles; and multiple nongovernmental organizations to create the Emerald Coast Opportunity Zone.

Passed by Congress in late 2017 as part of the Tax Cuts and Jobs Act, Opportunity Zones allow investors to defer or eliminate federal taxes on capital gains until 2026 if they invest in distressed communities identified by the governors of each state. Investments are made through special funds created solely for the program.

The heart of the Olympic Peninsula is about 110 miles west of Seattle but is a three-hour drive. Much of it is rural, underdeveloped and isolated. As Johnson learned during his outreach campaign, many areas dont even have broadband access, especially those on the west side of the region.

Can you imagine staying in a tent in Seattle just so you could have a meeting? Johnson says.

Among the states 139 opportunity zones, just 29 percent are rural, according to The Opportunity Zones Database.

Critics claim the program is a thinly veiled tax scheme for wealthy investors. Many Opportunity Zones across the country are also located in relatively affluent areas. Thats not the case in Jefferson and Clallam counties, both of which qualify as low-income federal census tracts.

The Emerald Coast Opportunity Zone, which encompasses roughly 14 census tracts, is located in a region still rebounding from both the decades-long decline of the forestproducts industry and the still-resonating effects of the Great Recession. The Emerald Coast entities are working with the state Department of Commerce and the U.S. Department of the Treasury to solicit investment in the region.

The region is still heavily reliant on tourism, which pumps nearly $1 billion annually into the area economy. Many of those dollars come from the 3 million people a year who visit nearby Olympic National Park, as well as tourists trekking to visit Forks to explore the setting of the still-popular book and movie series Twilight. Though the Opportunity Zone effort is in its infancy, several projects are already underway, including the Jamestown SKlallam Tribes $40 million, 100-room hospitality project, the 7 Cedars Resort; and phase I of the Bell Creek Technical Park, which features up to 200 housing units and light retail, a technology campus and green space development.

Emerald Coast partners are reaching out to large tech companies such as Google Inc. and Amazon Inc. to help develop the park, Johnson says, adding that affordable housing is especially critical for future economic growth.

Weve actually had folks whove gotten jobs out here but then declined because they couldnt find housing in the area, he says. Unlike Seattle, weve got more land and our land isnt nearly as expensive.

A number of projects already underway or in the planning pipeline might be attractive to potential investors, says Sarah Lee, a director with the state Office of Economic Development & Competitiveness, which is working closely with Emerald Coast partners in their quest for investment.

Some of these shovel-ready developments include:

– A three-story, 100-room hotel being developed by the Lower Elwha Klallam Tribe in downtown Port Angeles.

– And, the crown jewel, the Port Angeles Waterfront Center, a proposed $47 million performing arts and events center. It will include a 500-seat multipurpose auditorium; a 300-seat state-of-the-art conference facility; and it will house the citys symphony, opera and community theater, and host other groups.

To date, backers of the center have raised about half the funds needed to begin construction including a $9 million donation from the estate of a long-time local arts supporter who passed away. The project was expected to get under way this year, with a proposed grand opening sometime in 2021.

Johnson notes that Emerald Coast partners also are reaching out to airlines in the hope of bringing service back to Fairchild Airport.

In Sequim, City Manager Charlie Bush cites a 50-acre industrial-zoned parcel that is awaiting investment and development. Sequim, located in the rain shadow of the Olympic Mountains, has been known more as a retirement center for aging baby boomers than a destination for new businesses. But Bush says thats beginning to change as the city and the regions demographics shift.

Our community is getting younger, says Bush, adding that the area boasts a growing remote workforce that has been priced out of cities or has simply decided that they prefer a rural community in which to live and raise their families.

On top of that, the city continues to attract potential residents lured by the areas quality of life, abundant outdoor activities and fresh air. Bush expects the areas organic agricultural base with lavender farms, cornfields, wineries and the like to continue to prosper, but he says the Opportunity Zone has potential to expand the citys light manufacturing, maritime and high-tech industries.

In the more rural areas of the expansive Olympic Peninsula, some of the partner tribes involved with the Emerald Coast Opportunity Zone are busy working on a host of initiatives: The Makah are working on a desalination plant; the Quileute are investing in refrigeration technology, ice manufacturing and experimenting with so-called micro-grids aimed at creating more energy independence.

Johnson also cites the re-opening of the former McKinley Paper Mill in Port Angeles as a potential catalyst for the states timber industry. The mill is set to open this year and perhaps expand operations down the road. DEVELOPMENT MOMENTUM: A $47 million performing arts and events center is on the drawing board for the Port Angeles waterfront. Photo courtesy Kyle E. Johnson

This is actually one of the bigger things we have going on for the community, says Johnson, who notes that underserved communities have historically struggled to gain access to capital and the expertise to make projects shovel ready.

However, strengths include forest resources, developable land and maritime assets, as well as the relative lack of red tape in smaller communities.

Working in rural communities is more administratively simple than trying to develop on the I-5 corridor, Johnson says. The primary risk for our area is that the timelines for investor returns are likely to be longer than more populated areas and that our communities are more vulnerable to economic downturn. However, our region has a negative housing capacity, for which we predict a continued demand even in the face of a slowing economy.

Meanwhile, Lee is continuing to work with Emerald Coast partners and shop their projects around to foundations, social-impact investors, technology companies and others in hopes of attracting interest.

Well talk to folks, work with folks and find out whos interested in what, Lee says. These communities have amazing projects, but [they] dont always have the know-how to make their particular projects ready. Were trying to help them do the due diligence [necessary] to make them investment ready.