A Window on the Future 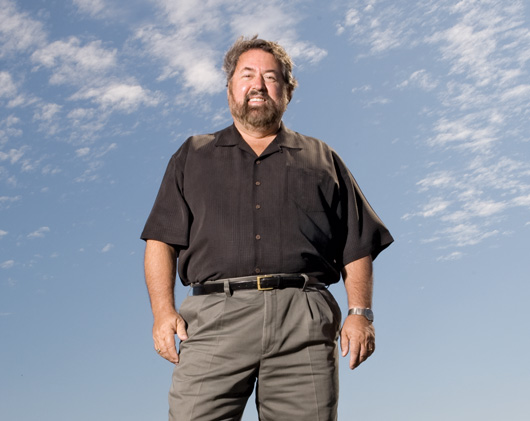 Walk into the San Juan Island offices of Mark Anderson’s Strategic News Service (SNS) and you’re confronted with a panoramic view of Haro Strait, with Vancouver Island across the water. The scenic location fits one of the technology industry’s favorite prognosticators.

Anderson’s predictions and perspectives-which tech titans around the globe pay handsomely for-can be as crystal clear as his view.

Check out, for instance, his forecast for two Puget Sound giants: Boeing and Microsoft. The aircraft manufacturer is “dead-dead,” he says. “Deader than they think. “I don’t think Boeing understands Boeing’s own future,” Anderson says. “Boeing’s future in Seattle is grimmer than Boeing’s future in general. At a time when everyone is giddy over the Dreamliner, I take a bigger look. China, your No. 1 customer, has just turned into your No. 1 competitor. They’ve canceled orders and the internal edict from the Communist Party is ‘Don’t buy anymore outside guys’ stuff.’ That’s horrible news. Russia is trying to build a whole new airframe company and in Europe, billions more in subsidies for your chief competitor.”

He adds: “Don’t rely on Boeing. If you’re a Seattle Chamber of Commerce person, don’t turn to Boeing; they aren’t going to help you out.”

Anderson does, however, expect great things from the next Microsoft operating system, due out this fall.

“Windows 7 will be the best-selling Microsoft product of all time,” he predicts. “And Q4 will be much bigger than people think. That’s a real driver of commerce for all.”

Now consider the source, especially given Anderson’s celebrated prescience. Since 1995, industry leaders and investors have forked over $595 to $895 a year for his weekly SNS newsletter with his predictions on the computer and telecommunications industries. A blue-chip roster of tech heavyweights, including Bill Gates, Mark Hurd, Michael Dell and venture capitalist John Doerr, are subscribers.

To extend the impact and influence of his newsletters, Anderson also organizes small conferences in southern California for the technology intelligentsia. Dubbed FiRe, for “Future in Review,” the get-togethers attract an exclusive clientele, with attendance capped at 200, of high-level executives from world-class, tech-driven companies.

At these conferences, Anderson peels back the layers of technology’s future. He probes nanotechnology, space travel, biology, medical diagnostics and other fields. His on-stage demeanor reflects his island lifestyle: easy-going but scholarly.

But Anderson’s reputation stands in contrast to his humble surroundings. The Economist has called FiRe the “best technology conference in the world.” Last year, noted BusinessWeek technology writer Steve Hamm named Strategic News Service “one of the most successful high-tech newsletters.” The New York Times labeled Anderson “one of the technology world’s more highly regarded pundits.”

Larry Smarr, a computer science professor at the University of California at San Diego and director of the California Institute for Telecommunications and Information Technology (a joint program of UC San Diego and Irvine), says Anderson is someone who “lives in the future and reports back. He sees things coming, being invented before it gets to be visible to a significant portion of the population.

“We have this insane level of specialization in our culture,” Smarr says. “Mark swims against that current. He’s also brave. He will tell you exactly what he thinks.”

Anderson’s ability to integrate complex subjects and forecast trends so impressed Rick LeFaivre, managing director at Kirkland, Wash.-based OVP Venture Partners, that he recruited Anderson to the VC firm as an adviser.

“Mark is a really, really good big-picture strategist,” says LeFaivre. “He can see the big picture in many areas. Lots of guys are really big in their segments, their specialties. Few people step above that and see the big picture.” He notes others in that category might include former Microsoft chief technologist Nathan Myhrvold, Sun Microsystems co-founder and chief scientist Bill Joy, and Stanford University futurist Paul Saffo.

In October, Anderson will bring FiRe to Seattle, including a special “sub-conference” of FiRe dubbed the CTO Design Challenge, in which technology executives will pool their problem-solving skills.

During the challenge part of the meeting, business technology chiefs first look at purely technological aspects of a problem-for example, in one recent meeting, the problem was firefighting strategies in wildfire-ravaged San Diego County. Then the participants take the discussion in a new direction and expand its reach.

“These guys are the smartest guys in the world,” Anderson says. Referring to the wildfire exercise, he adds, “They came up with a stunning achievement that integrated NASA, university systems, technology and the existing firefighting structures and systems.”

“Seattle is at a crossroads,” Anderson says. “Seattle needs some leadership. That’s part of what we want to do with this conference. There are lots of ways to create jobs in the Northwest and Seattle, but they require action and decision. Seattle can still have a great future.”

Ebullient, intellectual and respected, Anderson has repeatedly staked his career on big ideas.

He keeps his fingers on the pulse of technology as president of Technology Alliance Partners, which provides trend and marketing assistance to telecommunications and technology companies. He also founded the WSA’s Investment Forum (now the Fast Pitch Forum).

He claims to be among the first to predict the global liquidity collapse, on “CNN World News,” back in February 2007. He says his accuracy rate of his predictions over 10 years-which his readers hold him to account for-is greater than 90 percent. He is best known for forecasts of major shifts, redesigns and events in the computing and telecom markets, such as Steve Jobs’ return to Apple.

Last year, he predicted 2009 would see a boom in software for big screens and smart phones, wall computing and lightweight laptops. He’s also said 2009 would see big advances in voice recognition and the integration of biology and chips.

Where did all this envisioning come from? He was always good at science from an early age, he says. At age 8, he wrote a letter to the head of the United States space program suggesting a better way to deploy rocket fuel. That official ignored the letter and returned it, but the ideas behind it later became standard procedure. Anderson framed the hand-written letter. It hangs in his island office.

Anderson, 58, hails from Elmhurst, Ill., near Chicago. He excelled, both academically and in extra-curricular activities, at a large high school. Around age 20, he realized he was good at predicting things.

Anderson was intrigued by the scientific method, which starts with a theory, then tests that theory, using the results to refine the initial premise. “But where did the premise come from?” he asks. “The question is the hard part.”

He consciously began to practice “pattern matching,” a skill he honed while earning bachelor’s and master’s degrees in marine biology and marine biochemistry at Stanford University. Over the years, he says, he has trained his mind to ask the right “first question.”

“The job that I’m doing in the newsletter is integration, a combination of pattern matching and integration,” he says. “[I’m] looking for patterns that are being honored or violated and integrating the results of that across many places.”

Before starting his newsletter, Anderson was a technology consultant from 1989 to 1995, with clients including McCaw Cellular Communications and Aldus Corp. (now part of Adobe Systems). He has experimented with keeping an office in Seattle but now runs a mostly virtual company, whose staff includes his two sisters as his editor and program manager.

His workplace has ample space for conversation and thinking. At its center are two sofas, a globe and tripod-mounted binoculars for whale watching. A large flat-screen TV rests on top of a cast-iron wood stove, which is fronted by an array of consumer electronics gadgets-phones, remotes and other mobile devices.

From this setting, Anderson thinks big. In addition to newsletters and conferences, he chairs SNS Project Inkwell, a computers-in-education initiative. It aims to be a standards body for computing platforms in K-12 classrooms and advocates for every child to have a computer. Microsoft, AMD, Gateway, SanDisk, Intel and others have backed the project.

San Juan Islanders know him best for creating the Whale Museum in Friday Harbor and for founding the Orca Relief Citizen’s Alliance, a group that urges tighter restrictions on popular whale watching boats.

“The boats cause the whales to lose sonar ability and they starve,” he says. “The boats increase their [the whales’] requirements for food at a time when there are fewer fish, and their starvation accelerates.”

Near his sea-view office, Anderson makes his home on a lush, inner-island farm where he raises sheep and blueberries. He zips around the island in a silver BMW M Roadster convertible.

Anderson talks exuberantly about theoretical physics, marine biology, chip sales in Japan and European heads of state. When pressed, he touches on more personal topics such as music and local artists. But he speaks most emphatically about the whale watching industry. “We are going to do something about it,” he says. That’s his prediction.