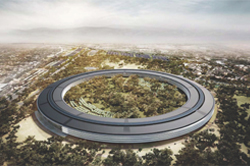 Apple, universally adored for its design innovation and strong aesthetics, has become the most valuable company in the world, capitalized today at more than $630 billion. Analysts expect Apples star will continue to rise as it designs its way into better and cooler products and projects. But not everyone is an Apple polisher. Bellevue feng shui master Shan-Tung Hsu warns that Apple may be designing its way into oblivion with the proposed circle-shaped Apple 2 campus headquarters in Cupertino, California, designed by the London architectural firm Foster + Partners. Hsu says the spaceship-like design, which will house 13,000 employees, violates many of the basic principles of the ancient Chinese discipline of feng shui because it lacks a strong spine, a central focal point to house the companys soul and an opening to interact with the world. Such circular spaces as Apples planned building, while dynamic, do not resonate with corporate and intellectual activity, he says. They can spin but not grow and are the antithesis to creativity and productivity. Hsu continues: The open green space in the center is too large and the only focal point is the empty green space. … When the focal point, known in feng shui as the energy spot, is empty, no other design features are significant, no matter how elegant and innovative the design. Apples cofounder, the late Steve Jobs, was an ardent student of Eastern philosophies such as Zen Buddhism, but his interest apparently didnt extend to feng shui. Jobs claimed the facility would be the best office building in the world.”