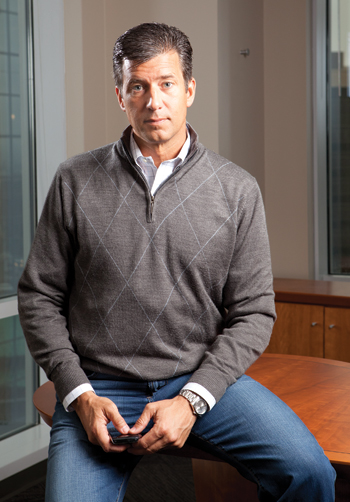 Its the ease with which you can surf the web or check your email that has made the smartphone such a popular gadget. And, while corporate giants like Google, Microsoft and Apple get well-deserved credit for providing the basic operating systems that power these magical devices, there are plenty of other software providers that play key roles behind the scenes.

One such company is Bellevue-based Motricity, which puts the smarts in your smartphone by offering a platform that mobile carriers can use to drive the many new applications being developed for the devices. When you click on the globe icon on a Verizon phone, for example, Motricitys platform connects you to the internet. Forging Motricitys under-the-radar strategy is CEO Ryan Wuerch, 43, a dapper, trim Tulsa, Oklahoma, native who dropped out of college to become an entrepreneur. He started off selling nutritional supplements, then went to work for a pharmaceutical concern before joining Learning 2000, an educational software company, as partner and president.

When Motricity bought InfoSpaces mobile services unit in 2008 for $135 million, the company moved its headquarters from Durham, N.C., to Bellevue. Since June, when Motricity filed an IPO that raised $50 millionfar short of the $250 million plannedthe company has been on a roller-coaster ride. Its share price, which started at about $10, rose above $30 at the end of last year before plunging again.

Although the company turned a profit of $2.9 million, compared to a loss of $4.4 million the year before, and fourth-quarter revenues soared 42 percent to $36 million, the numbers were lower than analysts had projected. Even so, Wuerch remained bullish in a statement accompanying the earnings report: We have continued to deliver market-leading solutions for AT&T, Verizon and Sprint, he said, while aggressively expanding our international footprintsigning six new international operators throughout Southeast Asia and Indiamore than doubling our global addressable market opportunity.

Today, the 600-employee company (350 of them work in Bellevue) offers a suite of products upon which carriers build branded mobile data services. Motricity also works with content publishers such as Showtime and TBS and a number of Conde Nast publications.

Nevertheless, Motricity has faced mixed reviews. The Wall Street Journals Heard on the Street column drubbed the company for being too reliant on a handful of big accounts such as AT&T, Verizon, Reliant Communications and Sprint. But CNBCs Jim Cramer has been a fan, urging viewers of his cable TV stock-picking show Mad Money to buy, buy, buy.

Wuerch says the companys value lies in the hundreds of millions of dollars that have gone into developing its technology so its reliable. Subscribers just want it to work when you turn on your phone, he says. A good subscriber experience helps mobile operators hold on to their customers, reducing the high cost of finding new subscribers.

But Motricity increasingly faces new competitors moving into its space. Large companies such as Oracle, Lucent and Ericsson are beginning to offer some of the same services, as are smaller businesses like NewBay Software, a firm based in Dublin, Ireland, that recently opened North American operations in Seattle. NewBay provides software for carriers to allow subscribers to create, store, view and share user content, including photo and video blogs, social networking, messaging and contacts synchronization. Some of NewBays services overlap with Motricitys offerings.

To keep growing, Motricity is reaching out to international markets. Were focusing right now on the 2 billion people in the emerging market, Wuerch says. Their whole lifeline to the internet is through that mobile device. These nascent markets are comparable to where the U.S. was five years ago.

The company hopes to boost international revenues over time to 50 percent from the current 10 percent. It has set a target of having 1 billion mobile users of its platform by 2013, up from 350 million today.

Meanwhile, the acquisitions continue. In January, Motricity bought Adenyo, a mobile marketing and advertising company, for $100 million. Mobile industry analysts said the deal was indicative of how pure-play mobile internet data solutions firms are leveraging their scale in search of faster-growing markets, such as online advertising and marketing. Motricity plans to integrate Adenyos services into its mCore platform to offer a wider range of services that will help it monetize access to more than 350 million subscribers.

With the mobile data revolution at an early stage, Wuerch believes theres plenty of room to grow, and he says he has a detailed plan to exploit that growing market. The key, he says, referring to a statement written on a whiteboard inside his office, is maniacal execution against the plan.