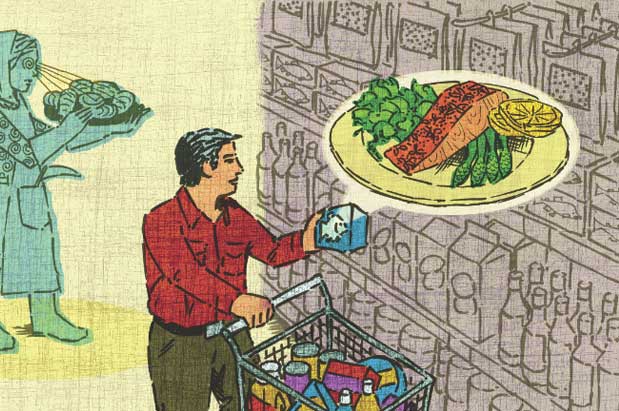 We have the best seafood and the finest coffee. But lets not fool ourselves. Like the rest of the country, we are actually spending less of our money on fresh, raw ingredients and more on processed convenience foods than ever before. According to the U.S. Bureau of Labor Statistics, American households now spend more on processed foods than on any other category of foodand twice as much as they did in 1982.

But the Northwest has a contribution here, too. The region has a taste for food processing technologies that are already making convenience foods fresher, tastier and longer lasting, and that could revolutionize safety in the years ahead.

Consider salmon. Locals might be able to tell the difference between Copper River sockeye and king fillets at a glance, but much of the country lives thousands of miles from fresh seafood and has to make do with canned meat and premade ready meals. When you put a salmon fillet into a canned product and run it through a conventional thermal process, the damage is so severe you dont see the original shape, says Juming Tang, professor of biological systems engineering at Washington State University (WSU).

Conventional processing involves vacuum packing the food in a can or a pouch, then putting it through a pressure cooker at temperatures above 212 degrees for more than an hour to kill most of the bacteria (although some highly acid foods can make do with lower temperatures). Not only does this method alter the appearance and texture of the original food, making it drier and less appealing to the eye, but it also breaks down critical nutrients, such as the beneficial omega-3 oils in salmon.

During the past few years, Tangs team at WSU has been developing new microwave-based technology for food preservation that addresses some of those issues. Its Microwave-Assisted Thermal Sterilization (MATS) system immerses packaged food such as salmon or pasta in pressurized hot water while simultaneously heating it with microwaves at a frequency of 915 megahertza frequency that penetrates food more deeply than the 2,450 MHz used in domestic microwave ovens.

This combination eliminates food pathogens and microorganisms in five to eight minutes, with far less effect on the food. We can see texture difference, color difference and an appearance totally different from conventionally processed products, says Tang. And we can show a much higher retention of nutrients. The new microwave system was originally funded by the U.S. Department of Defenses Combat Feeding Directorate. Its aim was to produce higher-quality, longer-lasting meals ready to eat (MREs) for troops in the field. The system recently received FDA approval for commercial use.

A package of salmon in cream sauce that has gone through this process still looks and tastes good, and yet can sit on a shelf without refrigeration for as long as six months without spoiling, says Kevin Petersen, who licensed the technology from WSU and launched a company called Food Chain Safety to commercialize it. With early financing from such heavyweights as Mars Incorporated and Kraft Foods, and later from Hormel Foods and Ocean Beauty Seafoods, he hired a team that has taken the 120-foot-long machine Tang developed to process six items a minute and designed a machine thats one-sixth the size. The device was installed at AmeriQual, a commercial food processor in Indiana that produces processed food for the military. NASA has also expressed an interest in producing food for use at the International Space Station. Food manufacturers and government agencies from Brazil and India, where refrigeration remains a challenge, have shown interest in the technology, too.

Right now, the machine is assembled in Tennessee from parts made by seven different suppliers, but Petersen hopes to build an assembly plant in Washington state along with a full-blown laboratory.

The key is to prove it can function in a commercially viable operation, says Petersen. Food Chain Safety is working on a prototype machine that can process the food much faster.

If the technology proves viable, it could have a dramatic impact on the food sector. Food companies envision producing ready-made dinners that are higher in quality than frozen dinners but can sit on a shelf, unrefrigerated, for months. Vegetables also look and taste better. The old-fashioned thermal process, for example, virtually destroys delicate vegetables like broccoli, which, with the microwave system, emerges intact and appetizing after sterilization.

A similar microwave process has been used in Europe for many years, but failed to receive FDA approval because it doesnt heat items evenly enough to assure all bacteria are destroyed.

Heat is one way to kill microorganisms but another, which has been known for more than 100 years, is pressure. Subject bugs to sufficiently high pressure and their cell walls collapse, rendering them harmless without damaging the food itself. Listeria, E. coli, salmonella, yeasts, molds and even viruses can be inactivated in this manner, but there is a catch. The amount of pressure required to kill all bacteria is almost unbelievably high: 85,000 psi, or five times the highest pressure found naturally on Earth, at the deepest point on the ocean floor.

Nevertheless, several companies around the world have been working to introduce high pressure processing, or HPP. One was Flow International Corporation, a Kent-based company founded in the 1970s by former researchers at Boeing to commercialize ultra high-pressure water jets as industrial cutting tools. In the 1990s, Flow launched a high-pressure system, dubbed Fresher Under Pressure, which pasteurized food without heat. Its first food product was guacamole, but early machines proved slow, unreliable and expensive. Flow eventually sold its Avure Technologies unit and the high-pressure portion of the food business. Last year, Avure moved from Kent to Franklin, Tennessee.

Unlike heat pasteurization, which has to heat its way all through to the middle of the food, pressure is instantaneous, says Glenn Hewson, vice president of global marketing of Avure. You can take a product in its final packaging and theres no effect on cooked meats, seafood, vegetables or deli salads. Talking about it is easy, but actually doing it is pretty hard. Our cost to process a pound of guacamole was tremendous.

Avures latest machines can process seven times the volume of food as its initial models, and will run reliably up to 22 hours a day. The cost, at between 4 and 8 cents per pound, is still above that of heat pasteurizing bulk liquids like orange juice, but is comparable with, or even cheaper than, traditional methods for preserving delicatessen meats.

It also means you can eliminate or greatly reduce the use of preservatives while getting tremendous shelf life, typically double or more than before, says Hewson. Hormel Foods now has certain products pasteurized with high- pressure processing that are getting over 250 days of shelf life. An orange juice, done right, can last six months.

Such ultra-extended shelf life come swith its own problems. Consumers familiar with meats and salads that spoil within a week can be suspicious of packages claiming use by dates a season or two into the future. When Hormel marketed their sliced meats with 100-day shelf life, they started getting calls and emails, says Hewson. Most companies using HPP now market around 21 days.

Many manufacturers have chosen not to publicize their use of the high-pressure technology, instead operating in a stealth mode where they gain the benefits of longer-lasting, fresher-tasting food without having to explain a potentially confusing new technology to consumers. Here, again, a Seattle company is taking a more innovative stance.

Buy an Evolution Fresh juice at a Starbucks and you will see each bottle proudly claiming that it was made using high-pressure processing, highlighting the fact that the juice is never heated. We are setting a new standard in cold-crafted juice, says Jeff Hansberry, Starbucks president of channel development and emerging brands. We are making real juice that has more of the nutrients and flavors from the fruits and vegetables from which it comes.

Starbucks bought Evolution Fresh late last year and recently opened its first stand-alone store in Bellevue, serving fruit and vegetable juices, protein drinks and smoothies. As Hewson notes, Starbucks is the big gorilla in coffee shops, but theyre nobody in the super premium juice business. Their competition is Naked, owned by Pepsi, and Odwalla, owned by Coca-Cola. Starbucks is differentiating by marketing the fact they use HPP.

Seattle is also home to a company at the very cutting edge of food safety. Seattle Sensor Systems is a startup selling a new type of scanner that promises to revolutionize the production and analysis of local foodstuffs. Its Spirit device, now in the early stages of commercialization, allows researchers to carry out molecular detection tests anywhere from the factory floor to the regions rivers and coastlines. It can detect, in minutes, anything from traces of peanut on production lines to deadly red tide toxins in Puget Sound shellfish.

Spirit is capable of detecting complex molecules like toxins, but also viruses and bacteria, explains Steve Dearden, sales and marketing director at Seattle Sensor Systems. You can even detect particular sequences of DNA and RNA genetic code, so you can tell very exactly what the pathogen is that youre looking for.

Spirit works using surface plasmon resonance, which, if anything, is more complex than it sounds. Basically, it uses the fact that light is absorbed in slightly different ways by different test materials placed on a metal (usually gold) surface. The science has been understood for many years but existing detectors are bulky and cost upward of $300,000. The portable Spirit device was devised by researchers at Texas Instruments and the University of Washington before being spun out to Seattle Sensor Systems. It can detect four different materials at once and is being sold for $35,000.

We are now in the process of homing in on different applications and looking for commercial partners, says Dearden. Weve got a pilot project using this to detect algae in seawater so we can predict when red tide blooms are going to take place. Were also doing very rapid testing to detect whether youve got toxin accumulation in shellfish samples. Eventually, you might be able to put an oyster in one end of a device and there would be a red or green light at the other.

Spirit detectors could allow manufacturers to check in moments whether cleaning had been effective in removing potential allergens likes peanuts, egg and milk, or to hunt for bacteria in high- volume processing applications such as a chicken plant. However, the system is likely still a few years from being found in every factory and farm. Its very easy for us to show we can detect something, says Dearden. But then you have to repackage the technology to make it easy for a food-line worker or somebody working on the shellfish beds to use. Its likely that well have a manufacturing partner at that point.

High-quality processed foods, zingy juices and peanut-free candy bars may not have the glamor of cedar plank salmon and fresh geoducks, but as the nations appetite for convenience grows, Seattles nutritional tech sector means that its foodie credentials are still very much on the menu.

But dont count on this great technologys leading people to eat more healthful foods. When the military took a survey of what soldiers wanted to eat most in the field, says Petersen of Food Chain Safety, the most frequent responses were hot dogs and pizza.