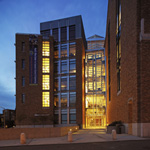 A who’s who of 23 Seattle area leaders including executives from F5, Facebook, Google, Amazon, Microsoft, Redfin, Concur, Zillow and Apptio sent a letter today to the Washington State Legislature in support of a $40 million capital appropriation for a downpayment on a second building for UW’s department of Computer Science and Engineering. The remainder of the money required to build the $110 million, 130,000 square-foot building would come from private sources.

Ed Lazowska, the Bill & Melinda Gates Chair in Computer Science and Engineering, who played a key role in raising money for the existing Paul G. Allen Center for Computers Science and Engineering, is optimistic about UW’s prospects for raising private funds to supplement the state money for the second building. In the case of the Allen building, completed in 2003, Lazowska says the school received 200 gifts including three gifts totaling $27 million, seven gifts of $1 million each, and dozens of $100,000 gifts.

The university has not yet settled on a site for the new building. The preferred site of the building is the current site of the Nuclear Reactor Building, which was placed on National Register of Historic Places against the wishes of the university.

Our regions computer science community has fast become one of the leading areas for growth and innovation in the country,” wrote the tech leaders. Please help us make sure Washington state continues to maintain its place at the forefront of the computer science industry.”

The Puget Sound region is arguably the software capital of the world. The region has more software developers than the San Francisco Bay Area according to the Bureau of Labor Statistics. Computer science is also the field with by far the greatest gap in the state between jobs available and students graduated.