A promising Redmond startup is working on a supercomputer designed to jump to conclusions. It could revolutionize everything from finance to health care 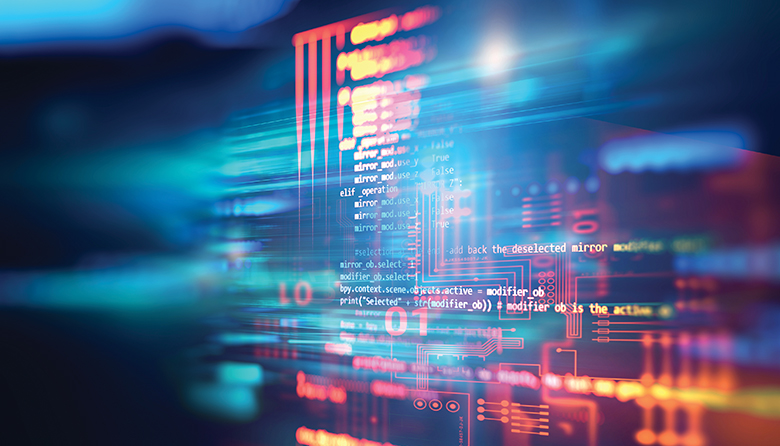 Five years ago, Larry Smarr and his colleagues at the University of California San Diego (UCSD) used an unimaginable amount of time on one of the worlds fastest supercomputers the equivalent of running your laptop continuously for 25 years to create a giant Excel spreadsheet with with 60 columns and 10,000 rows. Smarr and his team have studied that spreadsheet for the past four years to learn more about the microbiomes living in our guts and Smarrs in particular.

Smarr directs the California Institute for Telecommunications and Information Technology, known as Calit2, a partnership of UCSD and UC Irvine. He hopes to find new ways to diagnose illness, particularly an inflammatory bowel disease called Crohns, which he has. Each week, he feeds new data into a comprehensive spreadsheet, which is then run through visualization software displayed on an entire wall at UCSD.

When Smarr emailed that spreadsheet to the technical team at a Redmond-based startup called Pattern Computer, he gained promising clues for health-to-disease progression related to inflammatory bowel disease (IBD) in a mere three weeks.

I had been working on that data for four years and had not found them, Smarr relates. I know this data set inside and out and was not only surprised, but palm-slapped my head.

Pattern Computer identified a biochemical process based on specific protein families in the gut microbiome that appear to indicate the transtion from disease states to health within IBD, using data from 62 people. Smarr is now testing the hypothesis on a larger data set. Smarrs experience is just the beginning of what Pattern Computer cofounder Mark Anderson predicts will be a flurry of breakthrough discoveries made by his new system, which uses high dimensional visualization to find hidden patterns scientists didnt think to look for previously. It does so in a fraction of the time it has taken even the fastest supercomputers to do using conventional approaches.

Pattern recognition has been compared to machine learning, according to the journal Pattern Recognition, and finds applications in areas such as biometrics, bioinformatics, multimedia data analysis and data science.

This is bleeding edge stuff that will really change the world, says Anderson, a technology prognosticator best known for his Friday Harbor-based newsletter Strategic News Service. It will change how people compute, change how people and computers relate to each other. It will probably change how people do science and how we do scientific research. Weve already seen that happen.

Andersons team has been working with several major players in different industries since emerging from stealth mode in mid-2018.

In one case, he says, were working with a major consulting firm. In another, an aerospace firm. Were working on a problem with airline operations, and with Wall Street data. This system is agnostic about types of data it looks at or fields it comes from.

In just a few months, weve made discoveries in breast cancer, lung cancer, Crohns disease, in IBD, and made discoveries in how to use imaging for juvenile pneumonia patients thats never been done before, he says. Were going to have a long list of discoveries in different types of diseases and we have to decide which ones to share publicly and commercialize.

The Pattern Computer system is a new class of computer, purpose-built to discover things in very large data sets, says Smarr, a friend of Anderson who helped shape the birth of Pattern Computer.

Purpose-built computers exist today think of a specialized gaming computer or supercomputers, which are designed specifically to handle large, computationally intensive tasks. But Pattern Computer handles data differently. Scientists or engineers dont tell the computer what they want to find. Instead, the computer reveals discoveries, or links previously unknown, on its own. As Anderson describes it, Pattern Computer makes qualitatively different and more important discoveries than traditional artificial intelligence.

During the past three years, Anderson and a team of 20 raised $8 million in capital. The company leases space in Redmond near Microsoft and has its own data center in Seattle. An impressive hand-picked team conceived the idea in four days on stage at Andersons annual conference known as FiRe, for Future in Review in 2015.
At the time, Anderson said the effort was analogous to the advent of IBMs personal computer and would have taken two years and some $50 million to do what his team accomplished in days.

The team is raising Series A institutional and venture funding to complete a third system iteration and expand aggressively.

We are about a year ahead of plan in commercializing this, Anderson says.

Instead of selling the computer, Pattern Computer sells a service: Clients provide data, the computer crunches it and then the parties decide on how to commercialize the results.

We sell discoveries no one else can make in your data, Anderson says. Our technical advantage is that the Pattern Computer system excels in making discoveries in data that are complex and have high dimensionality. These are hard things for supercomputers to do mathematically. Imagine you share data and we immediately find something you dont know about. You may have a bias about whats causing jet engines to break or how to schedule airlines more efficiently or whats causing cancer.

Pattern Computer doesnt have that bias, and hypotheses arent needed.

Anderson has not unveiled technical specs, nor has he publicly put the computer through its paces, which is customary at tech product launches. He refuses to disclose specifics about the computer platform and how it works, leading many in the supercomputing and machine-learning communities to question his claim that its revolutionary. He only says the system relies on radically different computer architecture and uses the latest chips available. Were never going to tell the how, Anderson says. Were not going to let people see how it works. We dont want anyone to steal it.

Anderson instead plans to stage several industry-specific events and let the computers revolutionary data insights speak for themselves.

If it works as advertised, Pattern Computer is wading into a market with enormous potential. Scientists are not the only ones interested in crunching data and making hidden discoveries. Every corporation in America is trying to harness big data to find hidden patterns about their customers they can use to improve their businesses and earn a competitive advantage. Gartner, the global research and advisory firm, estimates the big data or business intelligence and analytics software market will grow to $22.8 billion by the end of 2020.

One of our challenges is which discoveries to talk about, how to rank them in importance, and how to pursue them, Anderson says. Do we write papers and books about the new mathematics we discovered and all the new health care discoveries? We have to be smart so we dont overstretch ourselves.

At the Pattern Computer launch last May, Anderson asked an employee to calculate just how long it would take a supercomputer to find and identify all the interactions of six genes in a 20,000-gene set, which was the gist of the work presented by Professor James Bentley Brown, chair of Environmental Bioinformatics at the University of Birmingham in England.

The employees answer: at least 25 years.

Pattern Computer performed the task in a day, discovering an insight for radically improving breast cancer prognosis and determining possible curative treatment paths, according to the launch press release.
Anderson says the company has taken the discovery and is verifying the results through an independent laboratory.

Seattle biotech pioneer Dr. Leroy Hood has not run any data through the Pattern Computer system but spoke at the debut event and is looking forward to its discoveries.

Any new computational tool is only as good as the results it can produce, Hood says. I believe it is still too early to make a prediction whether this will be revolutionary and way out ahead of the competition, which is considerable. It looks quite promising but results are what count.

Smarr, for one, is intrigued. He has not run additional data through Pattern Computer, nor has he had any involvement with the company since the initial data run. But he is exploring a new avenue of research in his IBD work, thanks to Pattern Computers earlier discovery.

Ive seen something new in what I knew all about, he says. Its pretty interesting that their tool was able to pull up a biochemical process hidden in 600,000 cells in an Excel spreadsheet.

The Concept Team
The brains behind Pattern Computer