Past Experience: The Boeing Clipper Has a Special Place in Aviation History 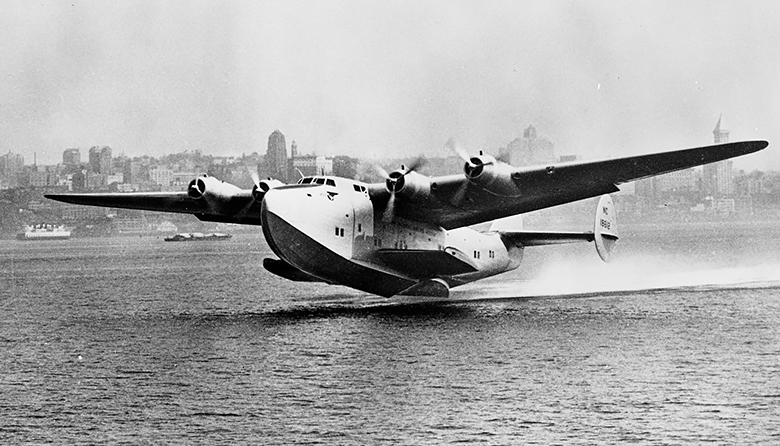 Boeings Model 314 had a limited production run only 12 aircraft were built between 1938 and 1941 but the Boeing Clipper, as it became known, has a special place in aviation history. By the mid-1930s, airplane travel was popular among super-rich travelers seeking to fly great distances in great style. Pan American Airways asked for a long-range, four-engine flying boat and the Clipper became the jumbo airplane of its time. With a range of 3,500 miles and a cruising speed of 188 mph, it flew from New York to Southampton, England (via New Brunswick, Newfoundland and Ireland) and San Francisco to Hong Kong (via Hawaii, Midway, Wake, Guam and the Philippines).

It boasted a white-tablecloth dining room (No. 1 in the cutaway below), sleeping berths (2), dressing rooms (3), even an optional bridal suite (4). A transatlantic ticket in 1939 cost $675 (more than $12,000 today); a Pacific crossing $760 (nearly $14,000 today). At the outbreak of World War II, Clippers were drafted into military service. President Franklin D. Roosevelt traveled by Clipper to meet with Winston Churchill at the Casablanca Conference in 1943. The year before, Churchill flew by Clipper from Bermuda to England after meeting Roosevelt at the Arcadia Conference in Washington, D.C. Assembled at Boeings Plant 1 by the Duwamish River, Clippers were towed to Elliott Bay for their test flights, including this takeoff photographed against the Seattle skyline in September 1941. No Clippers exist today; the last surviving model was scrapped in 1951.

Have an idea for a past experience topic or photo? Email [email protected].