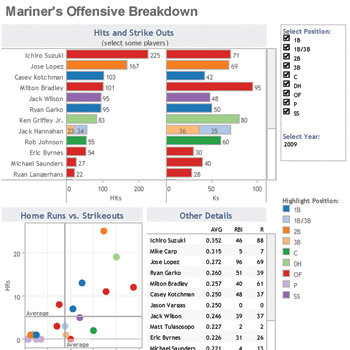 Deep in the heart of Fremont, just steps from the average
folks in the beloved Waiting for the Interurban statue, is a company
promoting power to the people through data.

Not the gray pinstripe data of your father. Tableau Software
is not content with winning awards and setting growth records in the area of
software known as business intelligence or analytics.

This seven-year-old company with Stanford University roots
wants to change how the average person sees data. Christian Chabot is the
blue-eyed and metaphorically bushy-tailed chief at Tableau, and he wants to
transform data the way YouTube transformed video. He wants Tableaus Public
product, which the company gives away free, to transform how people leverage
data.

We want to create a breakthroughwe want to make data
analysis easy, Chabot says. Of course, that revolution would catapult the
business into profits, if its name became synonymous with easy visuals.

As more people encounter our product online, we think it
will flow back to us, in the form of increased customers for the commercial
products that cost money, Chabot explains. This is a common model in the
software industry, used by Adobe Systems, among others.

Easy is a complex target, however, explains computer
science professor Dan Weld, who specializes in research on user interfaces in
his work at the University of Washington. Weld speaks favorably of Tableau Public.

The software allows a user to create tables, bar graphs,
scatter plots and other visual displays, and publish and share them online.
Viewers can click these graphics to rearrange the data according to a specific
interest. For example, if the data is about real estate sales in King County, a
viewer may focus on just the Northgate neighborhood. The data displayed will
realign to show the narrower focus.

But Weld cautions that finding the magic threshold for
public acceptance is a risky prediction. How easy does it have to be? he
asks. Nobody knows.

Tableau brought in an estimated $20 million last year
working for banks, pharmaceutical companies, health care giants, the federal
government and other clients that create custom software. The company plans to
hire 50 more people in 2010, adding to its roughly 100-strong workforce, and
perhaps will bring on board that many in each of the next three years. It won
an award from Inc. magazine in 2009 as
one of the nations 500 fastest-growing companies.

But the social potential of the free product and the growing
public awareness are a glittering prize in Chabots eyes. People do not have to
use Tableau directly, but perhaps they will click
through graphics on websites that others create. Millions of people visit YouTube to see
videos of dancing parrots, for example, but few make their own videos.

What is now a boring spreadsheet of sales information, vote
results or student math test scores could answer important questions. Why didnt a store sell as many phones on Fridays as on
Tuesdays? Why did some students
score badly?

The big players in the business intelligence market are
subsidiaries of Oracle, SAP, Microsoft and IBM, among others. But small players
like Tableau are being nimble and attracting customers, according to journalist
Jeff Vance, who writes at Datamation.com about the field.

He cautions that the big guys may create similar interactive
features for their products, and this competition could make Tableau and other
small fish targets for buyouts. Chabot wont rule that out, but says he and his
staff are in the game for the long term. It is not in our culture to plan for
a takeover, he explains.

Tableaus culture mixes pinstripe and college dorm. The
bright green waiting room of headquarters sports a Wii game console challenging
all who pass at a digital bow-and-arrow game. On the wall are framed awards
from business magazines.

One cultural icon of an earlier revolution, Charles Geschke,
Ph.D., is on the Tableau board of directors. He co-founded Adobe and helped
that brand transform the entire publishing industry. The chief technology
officer at Tableau is Stanford Universitys Canon USA Professor of Computer
Science and Electrical Engineering, Pat Hanrahan, who was the chief architect
of technology for animation and a co-founder of Pixar. He works at Tableaus California
office.

Another key member of the team is co-founder Chris Stolte,
who is vice president of engineering and has a doctorate in computer science
from Stanford.

Chabot studied computer science in college, but got his
masters in business. Before helping start Tableau, he was an associate partner
at Softbank Venture Capital, a $2.5 billion venture capital firm, where he
specialized in enterprise applications. Before Softbank, he co-founded BeeLine
Software, a pioneer in digital route mapping technology.

Looking at the passing water from the Fremont office, Chabot
explains that he and the company like Seattle. Its a great size. The setting
is fun. It is exciting.

The name of Tableau’s Public product has been corrected in the online version of this story.