Make that Screwdriver a Double 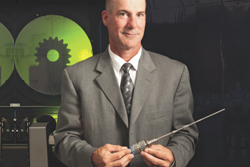 Manually driving a screw is an inefficient process. Either the hand turning the handle has to be repeatedly shifted, or the screwdriver has to be taken out of the screw head and repositioned.

What would make more sense is a tool that drives the screw in the desired direction whether the handle is turned to the left or the right, so both the hands and the tool stay in place.

A tool, in other words, like the one that two related Fife-based companiesRatchet Solutions Inc. and Double Drive Medical Inc.have taken from inventors idea to marketable products.

Its one tool but two companies because the target markets are so different. Ratchet Solutions already has its $20 consumer product on the shelves at Lowesit has sold more than a million unitsand is looking for more retail outlets in the hardware/home improvement market. Double Drive Medical, meanwhile, plans to sell its device to the surgical market for such applications as installing spinal screws.

Tactile feel is very important to a surgeon, says Bob Overmars, CEO of both companies. With a Double Drive, surgeons dont have to keep readjusting their grip, so they maintain that tactile feedback.

Overmars is a serial entrepreneur in the medical-device business, operating a company that makes, modifies and repairs surgical equipment and tools. A New Jersey inventor came up with the design of the Double Drive, but was never able to develop a market for it. A colleague of Overmars saw it and got interested in trying to market it. He asked Overmars to build a model, and Overmars, in turn, saw the potential in the medical market.

While the consumer retail version is made in China, Overmars and his team have been vetting domestic contract manufacturers to build the medical version, with production likely by the end of this year. Theyve also sent sample units to prospective customers. The response, says marketing director Dave Judge, has been overwhelming, with a list of buyers in place before the first unit has even been produced.

Overmars goals for the twin companies: Id like to be improving patient outcomes, and see the fruits of hard work of getting this to market.