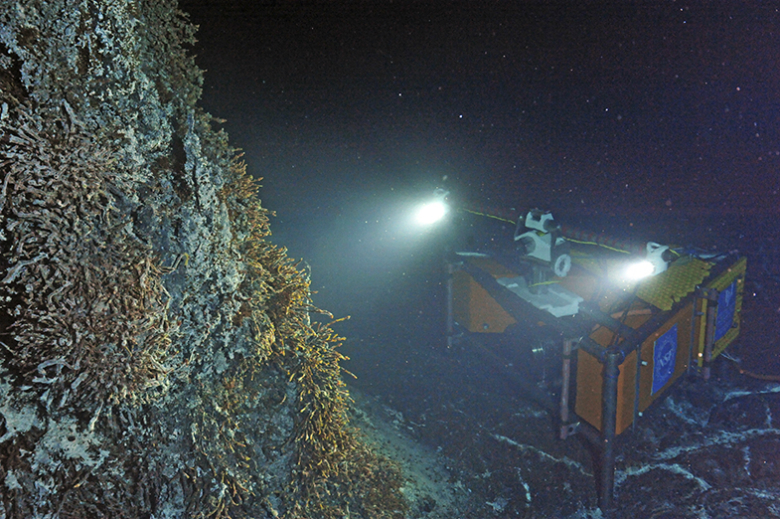 Image Credit: University of Washington/NSF-OOI/CSSF; See below for image description.

The University of Washington (UW) operates and maintains the Regional Cabled Array facility, a component of the National Science Foundations Ocean Observatories Initiative (OOI). The OOI is an integrated infrastructure program composed of science-driven platforms and sensor systems that measure physical, chemical, geological and biological properties and processes from the seafloor to an air-sea interface. The program addresses critical science-driven questions that will lead to a better understanding and management of our oceans, enhancing our capabilities to address important issues such as climate change, ecosystem variability, ocean acidification and carbon cycling.

As part of the OOI, the Regional Cabled Array underwater observatory uses Waves fiber network to provide 24/7, two-way command and control capabilities to the schools engineers, scientists and students, and to transmit real-time data to a global user community. The cabled array includes a 521 km-long high-power and bandwidth cable that crosses the Juan de Fuca tectonic plate off the coast of Oregon, reaching the most active underwater volcano, Axial Seamount, on the Juan de Fuca Ridge. With the data they are able to gather, the University of Washington is helping launch a new era of scientific discovery and understanding of the oceans by maintaining a permanent year-round presence in the Northeast Pacific Ocean.

In 2015, scientists across the U.S. watched live for the first time as Axial Seamount erupted. Data streaming from the cabled array showed more than 8,000 earthquakes over a 24-hour period, with a 7-plus foot drop in the summit of the volcano, and 30,000 explosions that occurred more than a mile beneath the oceans surface.

Data flowing 24/7 from the Cabled Array helps scientists better understand global warming, biogeochemical and geological processes, and ocean acidification along the Cascadia Margin one of the most biologically productive areas in the oceans. We rely heavily on fiber connectivity from Wave to not only quickly transfer our data from the Oregon Coast shore station to UW for analysis, but to also, in real time, control and communicate with our underwater instruments to respond to oceanic events, said Deborah Kelley, professor at the University. Wave is a critical partner to our success.

The observatory took over five years to build and consists of more than 900 kilometers of modified submarine telecommunications cable, advanced moorings and over 150 instruments that deliver data at the speed of light to shore via the cable. The project serves global researchers, students, educators, policymakers and the public.

Waves role in the project is linking its fiber network to the University at a landing station in Pacific City, Oregon. From there it connects the research information back to the team, to the OOI data portal at Rutgers University, and to the rest of the world.

Were excited to partner with the University of Washington and the Cabled Array program to empower real-time sharing of the data at the speed of light, said Patrick Knorr, EVP of Business Solutions at Wave. The companys unique infrastructure provides the enormous data capacity needed at transport speeds up to 100 Gigabits per second with no points of failure between Pacific City and the data centers, where the massive amount of information is stored and distributed.

Wave provides custom solutions to government agencies, educational institutions and medical facilities with unique connectivity needs. The companys experience in developing customized solutions that scale with business needs make it an ideal partner for the Cabled Array project, which is designed to expand over its 25 years of operation, pending congressional approval.

Image Description: The high-definition camera, built by the UW Applied Physics Lab, trained on the 4-meter tall, actively-venting hot spring called Mushroom at the summit of Axial Seamount. The chimney is about one mile beneath the oceans surface and more than 300 miles offshore. The chimney is venting fluids at >250*C and is covered in dense animal communities that include tube worms, palm and scale worms and limpets.

Wave is a leading provider of fiber and broadband services on the West Coast. Wave delivers a range of solutions for businesses, including custom fiber networks, high-capacity Internet access, data transport, phone services and dark fiber to meet the specific bandwidth needs of our customers along the West Coast. Wave is in the process of merging with 2 other companies to become the 6th largest internet and broadband services provider in the U.S.