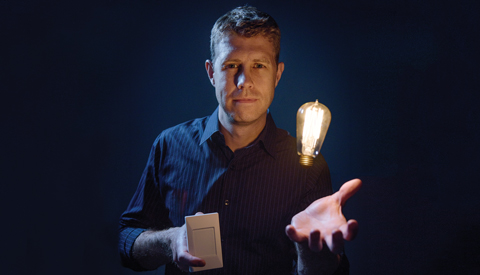 About three years ago, Derek Richardson and his wife bought a second home a dark cabin, says Richardson. He began searching for an affordable smart lighting system but couldnt find anything he liked. It was $30,000 or $40,000 for a professionally installed home system, he explains, or it was do-it-yourself systems that were difficult to set up.

He finally gave up and settled for regular light switches but kept thinking about smart lighting that was affordable and easy to install. As an electrical engineer at Cypress Semiconductor in Lynwood, he knew Bluetooth technology was going to be the new standard for the home. But there were no Bluetooth outlets and light switches on the market.

After talking with a builder who renovates homes, he hit on the idea of modular light switches that could be either dumb, like a regular light switch, or Bluetooth enabled so they could be controlled remotely.

Richardson and Alexander Strunkin, a software engineer, founded Deako Inc. in April 2015 to develop a hot-swappable network of switches connected by Bluetooth. The Deako switches feature capacitive-glass touchscreens that can be programmed using simple menus accessible via the touch panels or smartphone app.

One distinctive feature of the Deako system is that switches can act like regular, old-fashioned light switches. You can tap to turn lights on and off, says Richardson. If a guest comes into your house, they are not confused.

Also, the same Deako switch receptacle likely to cost only slightly more than a standard receptacle can be fitted with a dumb switch or a smart switch. Thus, a builder can offer the homebuyer a smart light system as an extra-cost option rather than committing thousands of dollars on a guess that the buyer will want it.

The Deako system is in beta testing and Richardson expects it to reach the market early next year. It will initially be marketed to homebuilders rather than consumers.