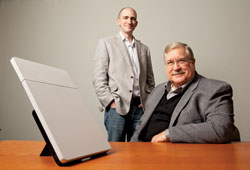 In situations where connecting to the internet can be difficult or costly, it becomes obvious how far our connected world still has to go. About two years ago, researchers at Intellectual Ventures (IV), Nathan Myhrvolds patent-hoarding collective, began looking at ways to enable faster and cheaper broadband internet service for fixed and mobile users.

Redmond-based Kymeta Corporation, spun off last year from IV, believes the answer lies in metamaterialsartificial materials with properties not found in nature. Researchers learned that metamaterials let them manipulate light and radio waves. By employing matrices of metamaterial cells, signals can be pointed and steered instantly and reliably toward a satellite. This eliminates the need for a moving, mechanically steered antenna that uses large amounts of power while maintaining a poor signal in a mobile environment. Metamaterials allow broadband satellite terminals to become smaller with highly efficient, nearly invisible antennas. The devices are also much less expensive because of their reduced size and reduced reliance on electricity.

The first product Kymeta plans to put on the market is the Portable Satellite Hotspot, a portable, laptop-size terminal that enables mobile broadband access to users anywhere in the world. People using the terminals would be able to connect to a Wi-Fi network via the terminals built-in Wi-Fi router.

Kymeta hopes to see its hotspots on the market by 2014. The biggest challenge, says Foterhingham, is accelerating research and development in order to meet demand from potential customers.

Ultimately, Kymeta plans to introduce products that will enable broadband connectivity on any moving platform, such as buses and trains, as well as aeronautical terminals that would allow for faster and more affordable internet access on aircraft.