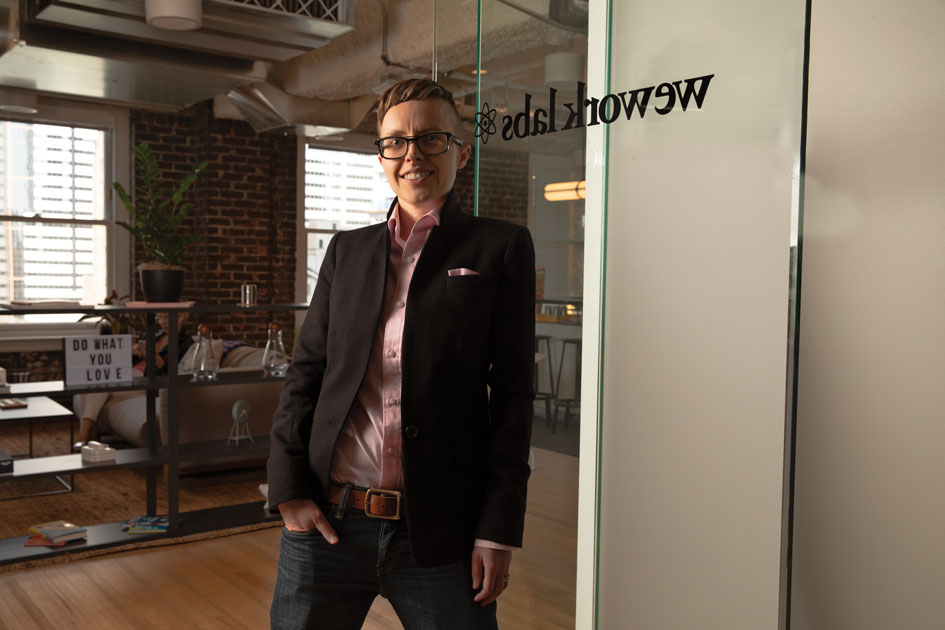 Shortly after graduating from Seattle University, Elizabeth Scallon landed what she thought was her dream job managing a lab and performing scientific research at Fred Hutchinson Cancer Research Center.

There was just one problem: She spent her days stuck in a dark closet looking through a microscope, examining cells to see how they corresponded to different drug targets. She felt isolated.

Scallon then began working at VLST, a startup developing immunotherapy treatments for cancer and autoimmune diseases. Once VLST hired its first chief executive officer, she began to understand that she wanted to be involved in business operations instead of research.

Scallon helped the company grow to more than 50 employees and $35 million in funding before spending more than a year at the University of Washington Center for Commercialization and five years as director of UWs startup incubator, CoMotion Labs. Along the way, she honed her business acumen by earning a Global Executive MBA from Georgetown University in Washington, D.C.

“We have 40 WeWork Lab sites. This is the only one in the Northwest.

At WeWork, we can be that tour guide, support system and bridge-maker for the entrepreneurs and be supportive of their vision for creating the future.

Im looking for outside entrepreneurs that arent seen or dont know the network. They dont have the friends and family or the archetype that is typical for an entrepreneur. Im interested in being their advocate, their ally, their sponsor, their connector.

Bold visionaries are who I want to meet with. I do a lot of LinkedIn and cold-calling.

Every startup by definition has to have a high level of technology.

Ive helped probably over 250 startups in our ecosystem, so you become overly confident in thinking that you might be able to predict the next big one. But in no way can I actually do it. Im not a magician. Im not a psychic.

The VLST CEO asked me what I wanted to do. I said I think I want to do operations. I think I could do safety, environment, health, shipping, receiving, some accounting, some purchasing. How fun. I fell in love with how every day was so different.

The CEO told me if you really want to make decisions, you have to have an MBA. I then realized that all research scientists reported to someone with an MBA.

Youre still applying scientific rigor to solve problems as we would in the laboratory, but now its on the office side.

If I had a magic wand, I would create a grant system for early-stage startups so that anyone could apply for $50,000 to $100,000 and be able to have that friends and family round. You dont get the full $100,000 right away. You get it based on experiments to show that there is a marketplace or that the product has development potential. It would have huge impact on the community.

We dont have good investment opportunities for unknown or underestimated populations. We cant create the future only from one demographic. We have to be inclusive and diverse.

We can do all these other resources, but if we dont bring capital to places that need capital, then it doesnt matter. Its just all good talk and no delivery.

Bigger isnt necessarily better. In San Francisco, they just give more money to bad ideas because theyre easier to fund. In my opinion, San Francisco has the worst startups because the capital is flowing so easily there.

Its so hard to get ideas funded here in Seattle, so theres a higher barrier upfront to get past. The ones that get funded are in a better state than in San Francisco.

We still have a little chip on our shoulder. We are a smaller ecosystem then Silicon Valley, and we have a little bit of that grunge attitude.

Im not an investor and it would be interesting to see what VCs and angels would say, but for me, I see a lot of collaboration from the entrepreneurs. Its better to connect and move the needle a little than try to fight each other for loose scraps.

When they get their first check in the bank account from a customer, thats when they know theres validation.

I think going from biochemistry to business is an unusual path.

I never stop working. Im constantly working and thinking. I dont have work-life balance. You only have so many hours and you better maximize them.

If I didnt do this, I have no idea what Id do. Id be a horrible employee.”