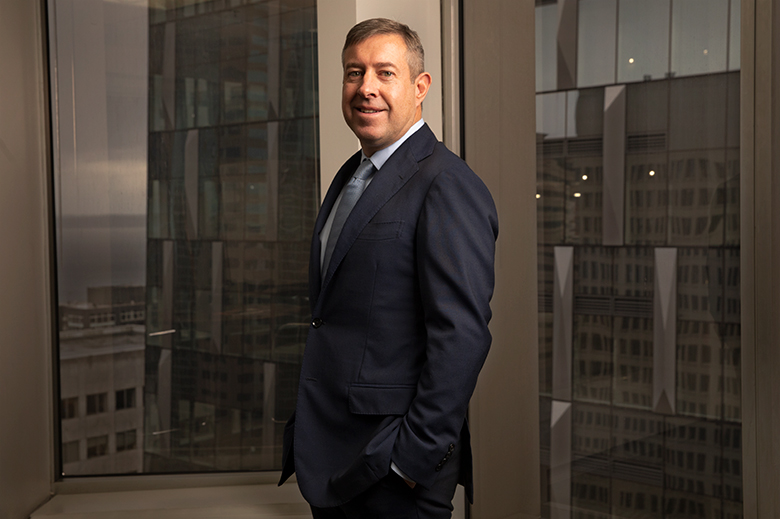 Matt Hill is responsible for KeyBanks second-largest market outside of its corporate headquarters in Cleveland.

Hill was named Keys Seattle market president and commercial banking sales leader for Washington in June. He has spent 27 years as a banker in the Puget Sound region. Most recently he served as managing director and Washington market president at San Francisco-based Union Bank, which operates 20 locations in Western Washington.

This is Hills second stint with KeyBank, which ranks No. 5 in Washington state in terms of deposits, with 7.67% market share and 149 locations.

Hills two primary jobs are leading Keys middle-market commercial banking efforts, which it defines as companies with revenue between $25 million and $500 million, as well as overseeing the various business lines the bank offers in the Northwest.

Hill is a Seattle native who attended college at Santa Clara University in California. He now lives in the citys Windermere neighborhood, less than two miles from the adjacent Laurelhurst area where he grew up.

My role and how I will be evaluated overall is really whats the success of Key as an organization in this market? Are we seeing growth across the board? Are we able to drive deposits into retail? Are we building the commercial banking business? Are we building wealth? So overall, Id say one scorecard is specific to commercial banking, but then theres also the broader scorecard. How are we doing in the Northwest?

From a deposit standpoint, were fifth overall. Weve been there for a long time. What will it take to truly move that needle? How do you continue to differentiate?

The technology piece is the biggest change weve seen, especially over the last 10 years. But overall, what it just comes down to is having relationships, whether its on the consumer side or the business side. Ive loved the customer-facing aspect of it.

We are not pulling back on branches unless we feel theres a different way to do things. Im somebody who personally doesnt think that brick and mortar is going away anytime soon.

Theres certainly the idea that hey, brick and mortar is very expensive. But consumers across the country still value the retail side of things.

Competition. It just doesnt seem to relent. And for us to differentiate, it really is all about the bankers themselves and their ability to relate to clients and deliver solutions.

I probably never thought Id be a market president. Quite honestly, I really just enjoy going out and meeting with companies, whether its clients or prospects. Im a very outgoing person. I love being in front of business owners and talking about their business.

Im very much of the school of thought to hire good talent, give them the resources and help them be successful in any way possible.

Probably, no, you dont have to start as a teller. However, a lot still do. Theres no question that somebody will be in college and looking for a part-time job, so theres a number of people that will start their banking careers as a teller.

I wasnt exactly a teller, but it was close. I opened up checking accounts and financed auto loans and did home equity loans and things of that nature. A lot of people still start in the branch and then work their way up.

I had a terrific experience at Santa Clara, but I actually missed the rain. I always loved Seattle. I figured Id come back. Its circumstance that I live so close to where I grew up.

Interestingly, theres four of us who lived in this Santa Clara house: Kevin Blair, who now runs Washington Trust here in town; Bart Ricketts, the CEO of Lease Crutcher Lewis; and Mark Grey, who heads up Stephen C. Grey & Associates. We all work in this market and have been pretty successful. So thats pretty cool.

My first stint at KeyBank, we had a significant seafood portfolio and I gained a very good understanding of that business and really how brutal it is quite honestly and how its a much more complicated business than probably anyone thinks.

I spent a summer in Hoonah, Alaska, working at my grandfathers salmon cannery. Long, long hours. My mom called it character building. I called her up about two-thirds of the way through the summer and said, I think Im tapped out in character building.

If I werent a banker, I would be like a heli-ski guy or something of that nature. Id love to travel the world to different ski resorts and take people on tours. Id love it.

Even though I didnt go to the University of Washington, Im a diehard supporter of their football program.

I play a little bit of golf if Ive got the time. Im not a good golfer.