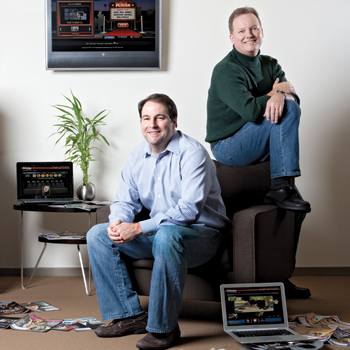 After selling more than 15 million units of the popular DVD
trivia game SceneIt?, what else could an innovator set out to achieve?
Apparently, a platform to make movies yet more socially engaging.

“We aren’t seeing anyone in the same space-immersive,
interactive casual games featuring hit movie content,” says Long. It will be
difficult for competitors to enter that market. “The relationships with the
rights-holders can be time consuming and difficult to navigate,” Long says.

Growth in the number of users has accelerated since
Exponential’s launch, fueled in part by game plug-ins for social networking
sites such as Facebook. Games are accessible as a free beta version at
HollywoodPlayer.com, as well as on high-traffic sites such as MSN Movies,
Wonderwall, BuddyTV and a 99-cent iPhone application, “Ask the Stars.”

“One of the great things about HollywoodPlayer.com is that
we can target our games toward our players’ preferences,” says Long. A rating
system will help the software customize the experience for each user.

For example, one puzzle game, “Movie Cubes,” is similar to a
Rubik’s Cube: Movie scenes play on all sides of the cube while players use
their mouse to quickly turn each piece of the cube in an effort to get one
cohesive scene all facing forward.

The company is funded by angel investments and revenues from
online advertising. Long says a paid VIP Pass program and a digital goods
system this year will generate positive cash flow by the fourth quarter.

“As we increase our fan base and enhance our site features,
we will begin to capitalize on the ‘socialness’ of the films themselves,”
explains Long. “People love to discuss why they like or dislike films; it is a
way to define themselves.”