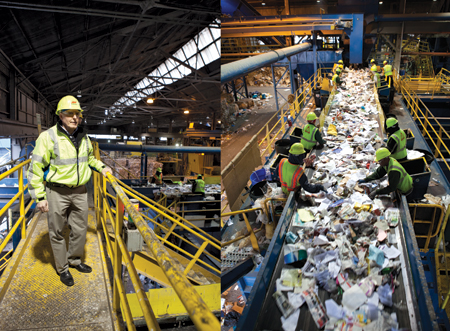 PCSI Design, an industrial design and engineering firm headquartered in Bothell, was recently hired by Seattle Lighthouse for the Blind to design a hardy, long-lasting easel that could be set up with one hand and was made from 60 percent recycled plastic.

The job sounded like a win-win for everyone. It would satisfy the strong consumer demand for products made from recycled plastic. The Lighthouse for the Blind, whose mission is to provide job training for hearing- and vision-impaired workers, would hire people to manufacture the product, thereby creating local jobs. And, if successful, perhaps the project would help divert some of the plastic that currently ends up in landfills or floating amid that great garbage patch that now, famously, floats in the middle of the Pacific Ocean.

But, and its a big but, the public is not aware of how hard plastics recycling is, says Greg Herlin, president of Cashmere Molding Inc., a Woodinville manufacturer that makes plastic components using injection-molding processes. He says that 90 percent of his customers want him to use recycled plastic in their products, but Cashmere can rarely accommodate their wishes.

Understanding why begins with a trip to Allied Waste Services recycling center in Seattles Sodo district, where an unending procession of dump trucks drops their loads onto a two-story-high pile of newspaper, plastic bottles, aluminum cans and grocery bags.

Inside the noisy plant, 34 men and women plus a graveyard maintenance crew of nine manually sort the items, removing non-recyclables including old sneakers carelessly tossed into the recycling bin. Its a labor-intensive business. And the profits are unpredictable. Materials recovery facilities (MRFs) like Allied have faced tough times since the recession began in 2008. 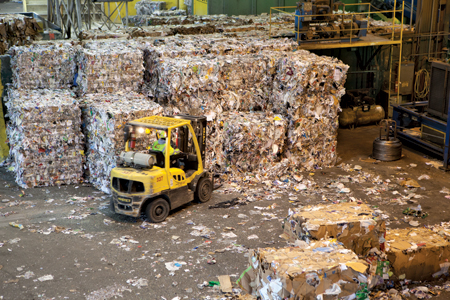 Materials recovery facilities, such as Allied Waste Services, have faced tough times since the recession.

Nationwide, the National Recycling Coalition estimates the recycling business is worth $236 billion and employs more than one million people. But the profits of recyclers can swing wildly depending on the state of the economy.

In Seattle, for example, city policies and consumer ethic have created a large local recycling sector. Since Seattle has moved to single-stream recycling, which allows consumers to throw different recycled products into a single bin, the volume of materials pouring into recycling centers has soared.

The recycling ethic is very good here. The city of Seattle does a good job of educating citizens, says John Caputo, material marketing manager for Allieds Seattle plant, which is a division of Phoenix-based waste management firm Republic Services. But the problem, Caputo adds, is demand. Since the economy has weakened, he says, the value of plastic and other products he supplies to manufacturers and other customers, including many overseas, has fallen by as much as 80 percent.

And the sluggish economy isnt the only problem. Plastics, which are the most common material in the recycling stream, present special challenges. For one thing, they are incredibly varied. Its estimated that there are close to 3,000 types or grades of plastics. Turning all these different plastics into a raw material that industry can use is a complicated task. If different plastics are melted together, the whole batch can be ruined, creating a nightmare for those who want to use the recycled material to create a new product.

The little ring left on a plastic bottle when the cap is unscrewed, for example, cannot be melted down with the bottle without contaminating the batch. The result is that virtually all locally collected plastic bottles are shipped to China, where laborers hack off the tips of the bottles with machetes before recycling the bottles.

Then there is the issue of contamination that results when consumers forget to clean the plastic containers before dumping them in the recycle bin. Of the 410,100 tons of incoming materials that enter Puget Sound, roughly 7,000 tons of otherwise recyclable material ended up in the residual stream that goes to the landfill due to contamination, according to a 2006 report on Puget Sound recycling facilities conducted by the King County Solid Waste Division. About three percent of the recycled product in the Puget Sound region is redirected to landfill as a result of contamination. Thats far below the national average of 15 percent. Even so, the Puget Sound report points out: These contaminants degrade product quality and contribute to increased end-user costs for additional cleaning, sorting and disposal.

Finally, for all consumers efforts, it turns out the highest-grade recycled plastic, the kind most manufacturers want, comes not from the drink bottles and grocery bags that we recycle in such large quantities, but from the hard plastics used in electronics and automobile dashboard components.

Those plastics are rarely recycled in the United States, in large part because of the high cost of disassembling the plastic from the various metal and electronic components. MBA Polymers, which is based in Richmond, Calif., for example, has developed technology for recycling plastic of various grades. But, aside from one pilot plant, it has no factories in the United States. Instead, it has built a facility in China. Low wages there make it economical for the country to import and process large quantities of old computers, appliances and soda bottles. According to a 2007 article in the industry publication Plastics News, China imported 13.4 billion pounds of recycled plastics, a 300 percent increase over 2000; one-third of it comes from the United States.

That makes American recyclers relationship with China a delicate one, says Patty Moore, president of Moore Recycling Associates in Sonoma, Calif. Every reclaimer [recycler] in the country sends some material to China. At the same time, [China is] drastically competing with, and in some cases outcompeting, domestic reclaimers, she explains.

Recyclers also do a booming business in Europe. Thats because the European Union has laws requiring a large proportion of manufacturers who sell electronics and other products to pay for the cost of dismantling and recycling the products. The regulations, in effect, assure there is a steady supply of quality plastic available for companies interested in producing products made of recycled plastic.

Since the United States has higher wages and few regulations, it has not developed the infrastructure necessary for processing various grades of plastic. The result is a break in the cycle of recyling.

Chris Follett, PCSIs vice president, says that, in his search for durable recycled plastic to use for his easels, he needs to understand how non-virgin (recycled) plastics react with one another, and how durable the materials will be. Without knowing exactly what plastics went into a particular batch of recycled plastic, Follett says, you dont know how strong or brittle that particular plastic will be.

Eventually, Follett hopes to find a reliable source of recycled plastic so he can begin designing quality products, including the easel, which use recycled products. As his boss, PCSI CEO and president Carlos Veliz, puts it: We dont want to design a product that ultimately is going to end up in the garbage.