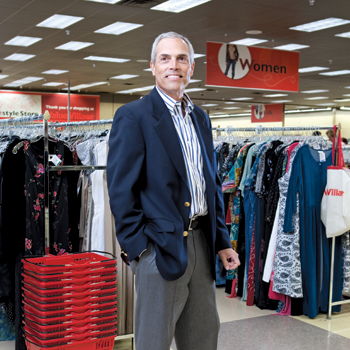 Ken Alterman had no clue that his former assistant from a
previous job purchased her clothing at a Value Village thrift store until he
took over as chief executive officer of the chain’s parent company, Savers Inc.

“I always wondered where you got all those outfits because I
knew how much I was paying you,” he recalls quipping at the time.

Once considered mostly a refuge of low-income individuals
and the young and counterculture sets, thrift shopping has entered the
mainstream as more and more customers have become accustomed to buying
secondhand merchandise from a wide variety of sources, including eBay and
Craigslist.

Bellevue-based Savers has been a big beneficiary of that
trend, and is now the world’s largest for-profit retail thrift chain, with 220
stores in the United States, Canada and Australia (19 locations in the Puget
Sound region alone). The company recorded sales last year of an astounding $663
million, up 26 percent from 2006. That’s in spite of a world economy mired in
recession. Or perhaps, because of it. In hard times, customers flock to its
retail outlets where products sell, on average, for just $4 apiece.

But this success is not only about low prices. Savers has
also played a key role in changing the experience of thrift shopping. Once the
place to shop for the down and out, these days, there’s no telling whom-or
what-you might encounter at a thrift store. To attract a broader clientele,
Value Village has abandoned the age-old practices of cramming knickknacks onto
every available square inch of surface space. Now, stores are brighter,
cleaner, and better organized.

The company is also more strategic than old-line thrifts
about the way it goes about selling merchandise. “Our philosophy is not how
much money you can get for an item, but how many items can you sell,” Alterman
says. “We don’t want to get rich on an item. We want you to buy two. Can I get
$10 for that item? Maybe. But I’d rather sell you two for $7.” Unsold items are
rotated out every four weeks to keep customers coming back, and inventory
turnover in stores is an impressive 12 times a year, about triple the level for
the average retailer.

The thrift shop industry is far from being recession proof.
Still, it’s among a handful of businesses that tend to do better when times are
tough by attracting customers who want to save money.

How does Savers, which started in San Francisco in 1954,
generate nearly three quarters of a billion dollars in revenues by hawking such
low-priced products? The company attributes its success largely to the
“everyone wins” business model founder Bill Ellison implemented in the 1960s,
when he began partnering with nonprofit agencies that would solicit, collect,
and deliver donations on behalf of the company. At that time, Ellison’s
business operated as Salvage Management Corp.

For their efforts, nonprofits receive payments based on
volume. Savers pays about $117 million each year to a variety of service
agencies. Seattle-based Northwest Center was the first nonprofit organization
Ellison signed in 1967 and remains among Savers’ largest partners.

Kantu estimates that Savers provides approximately 20
percent of the revenue the center needs to run its programs for disabled
children and adults. “I don’t think we’d be one of the largest agencies in the
area or U.S. that fulfills our mission if we didn’t have that extra money to
work with.”

Also, Savers likes to tout its green bona fides. Not only is
secondhand buying a form of recycling, but Savers also keeps unwanted items out
of landfills-only about half the merchandise that comes into a Value Village
makes it to store shelves-by selling it to overseas merchants, primarily in
developing nations.

The sales represent roughly 2 to 3 percent of Savers’
profits, which CEO Alterman says is not insignificant if you consider that
simply dumping the stuff would swallow around 10 percent of profits.

Given the company’s lengthy history spanning periods of both
economic adversity and heft, it knows how to thrive in both environments,
Alterman adds. In 2009, when the economy was at its most sluggish, Savers saw
total sales climb by 5 percent from the year before. On a per-store basis, not
including the 20 new stores, Alterman says revenue growth was in the double
digits.

Savers’ upward trend was mirrored at the 20 stores run by
Seattle Goodwill, according to that organization’s vice president of retail
operations, Cindi Forslund.

“We exceeded our expectations. We’re having the best year
we’ve ever had and our 2009 is not over yet,” says Forslund. The agency’s
fiscal year ends in June. Goodwill also expanded in 2009 by adding stores in
Kitsap County, Everett and beginning this spring, in Monroe.

While sales may be swift, donations are a different matter
entirely. Goodwill’s Forslund reports that she’s seen a modest increase in
donations as a result of some increased marketing efforts. Of the situation at
Savers, Alterman says its nonprofit partners simply must “go harder” to collect
the same amount of goods.

But when the economy does turn around, people will return to
luxury department stores, which in turn will fill up Savers’ donation bins.
When that happens, Alterman predicts sales activity at his shops will be
“crazy.”

In preparation, plans are under way to open 22 to 26 new
stores this year, with a heavy focus on expanding in the
Northeast-Massachusetts, Connecticut and New Hampshire-as well as upsizing some
local stores. At that rate, the company expects to have 300 stores by the end
of 2011.

“We do even better in a good economy,” Alterman says. “The
merchandise gets better. The treasure hunters grow. They’re not spending $4 per
item but $6. And when you’re selling 100 million items per year, one or two
extra dollars really adds up.”