Sally Bergesen built a business around running and athleisure wear, but theres nothing casual about her activism 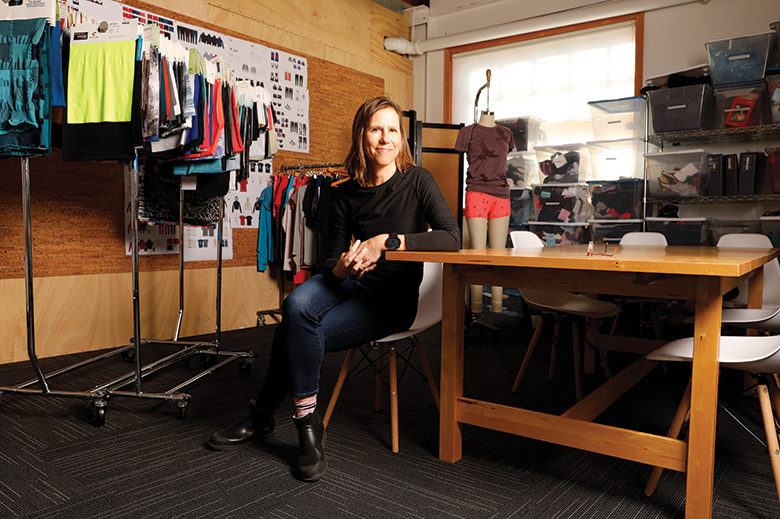 When professional long-distance runner Kara Goucher signed with Seattle womens running apparel company Oiselle, she was shocked by one of their first conversations.

Oiselle CEO Sally Bergesen asked Goucher what issues she wanted to talk about. Goucher, who had been a Nike-sponsored athlete, didnt immediately know how to respond. With Nike, shed been told exactly what she should tweet and say. The idea that a sponsor wanted her to speak her mind even if it was to talk about uncomfortable or controversial topics was astonishing.

Id never, ever spoken out before, Goucher says. Sally and Oiselle changed me in such a profound way. The voice I have is because they encouraged me to find it.

At Oiselle, women speak their mind. Thats the message Bergesen gives not only to her athletes, but also to the thousands of women who buy her clothes. She isnt afraid to pick a fight, be it with Nike, USA Track & Field (USATF) the national governing body for track and field, cross country and road running or the male-dominated New York Times sports section. To Bergesen, Oiselle is a feminist brand that stands for body autonomy, equal pay, diversity and inclusivity.

Sally speaks out without any hesitation or worry about what people will think about it, Goucher notes. For me, that was really inspirational.

To be sure, Bergesen also must weigh the consequences of alienating potential customers by taking controversial stances. For example, in the summer of 2019, Oiselle debuted its Women Up collection. The line of clothing featured the female gender symbol, and all proceeds from August sales went to Planned Parenthood. Bergesen knows that some of the women who buy Oiselle are not pro-choice, but she and her staff decided that supporting a womans right to make decisions about her own body was more important than staying politically neutral.

Theres more at stake for Sally when she speaks out, so its more brave when she does it, says Lauren Fleshman, a former Oiselle elite runner and head coach of Littlewing Athletics, Oiselles professional running team. Her entire business is on the line. People will spend dollars online to support or punish her.

Bergesen did not launch Oiselle to become a disruptor. When she started the company in 2008, she just wanted to give women a better-fitting pair of running shorts. In the early years, all of her energy went to launching the brand while simultaneously keeping her day job writing copy for Microsoft.

You lose money for a long time, she says of starting a company.

Bergesen leaned on her husband, a high school English teacher, to juggle parenting responsibilities for their two young girls, who were just 4 and 7 at the time. He took over many of the household jobs that traditionally fall to women.

Hes always been like, Go, honey, Bergesen says. He has no qualms about me being a breadwinner.

Eventually, as Oiselles sales grew, Bergesen made the company her full-time gig, found office space and built a staff. Oiselle has been profitable for the past two years, and sales grew in the double digits in the past year, Bergesen says.

Her move toward activism came as Oiselle began to sponsor professional athletes and she learned more about the track and field world. She discovered that Nike provides the majority of funding for USA Track & Field, meaning the sports giant controls most governing decisions.

Nike runs it like mini mobsters, Bergesen says. When you have enough money and power, that becomes acceptable.

Bergesens frustration grew when Oiselle athletes competed in the Olympic Trials. She discovered that the Oiselle logo could take up only 30 square centimeters on the singlet, rendering a brand almost invisible. At the Olympics, it was even worse. Nike owns the national team uniforms, so athletes cant wear their sponsors logo at all. The restrictions mean small brands struggle to promote their clothing, and athletes cant make money advertising their sponsor.

Bergesen realized the full extent of the restrictions when her staff posted photos on Instagram and Twitter of Oiselle-sponsored athlete Kate Grace winning the 80- meter race at the 2016 Olympic Trials. The pictures of an elated Grace were meant to celebrate the moment.

But soon after, the U.S. Olympic Committee sent Bergesen a cease-and-desist letter. The committee said that since the photos showed Grace wearing an Oiselle kilt with a bib with the Olympic rings, Oiselle made it appear as if it was involved in Olympic-related advertising. Bergesen was told that Nike is the only brand that can represent Team USA. Oiselle had spent $300,000 during the past years to pay Graces salary as she worked toward that moment yet couldnt advertise her greatest victory.

Bergesen couldnt stay silent while observing injustices in both the running world and womens rights in general. She knew that as a small-business owner, she wasnt taking the easy path. Shed worked as a brand strategist before leading Oiselle, and observed that most businesses werent willing to take a stand.

After having taken many stands, I get it, Bergesen says. Its easier to not. But I think when you are a woman, you learn pretty quickly that you need to call out systemic imbalances. I take it as my personal responsibility.

While speaking out can cost a company business, the rewards can be equally great. Labeling Oiselle as a feminist company sets it apart from other athletic brands and makes some fans more loyal. Women come up to Bergesen and tell her, I love what you stand for.

Lorne Richmond, CEO of Seattles Richmond Public Relations, agrees that businesses that take a stand can benefit by aligning themselves with a certain portion of the market.

Theres always risk involved, but theres also an authenticity to a business that feels a certain way and backs up everything they say through their actions, he notes.

While Bergesen didnt start Oiselle as an activist brand, shes never been afraid to have an opinion. She was no stranger to protest growing up in Berkeley, California. An old family video shows her mother protesting in Peoples Park while Bergesen, then a baby, sits beside her in a stroller. Her father was a civil rights lawyer who spent his career fighting for equality in Mississippi and then California.

He taught me to challenge authority, Bergesen says.

Bergesen now serves as an inspiration for female protesters in her own family and company. She took her daughters to the Womens March in Washington, D.C., sleeping on the living room floor of an Oiselle teammates house. At Oiselle, she encourages her staff members and athletes to have an opinion.

As one of Oiselles most vocal athletes, Fleshman speaks out about female body health, womens equality and athlete doping. She became a board member at USATF to attempt to fight Nikes dominance in the organization. Fleshman is a writer and Stanford graduate in addition to a runner, and shes used her prose to express powerful opinions on her own blog, in The New York Times and on social media.

Seven years of working with an outspoken, feminist company has solidified the importance of standing for something, Fleshman says.

Goucher has become an activist in her own right, bringing allegations against Nikes Oregon Project and her former coach, Alberto Salazar, who has been sanctioned for doping offenses involving athletes he was training. She continues to testify about the teams use of performance enhancing drugs and Salazars treatment of the team. Goucher plans to write a book that will go in to further detail on her experiences with Nike.

When Goucher first met with Oiselle, she told company executives of the accusations she planned to make public and let them know it would be controversial.

They said, Good for you, Goucher recalls. They said, We have your back. They were so supportive.

The Oiselle women use social media to support causes and advocate change. Bergesen has been a fan of Twitter for more than a decade, and appreciates how the platform favors short, pithy copy. Shes not afraid to express opinions online, and thats meant shes at times received strong reactions.

When its clear someone is more interested in trolling than exchanging ideas, Bergesen mutes them. But in some instances, feedback made her realize she should take a step back and reconsider her opinion. Tweets about leaving cell phones at home while jogging and running outside rather than on a treadmill drew criticism of privilege and snobbery. In those instances, Bergesen realized shed overstepped and said so.

The Oiselle social media accounts have also come under fire. During the 2016 presidential election, the brand posted a photo on Instagram of an employee wearing a Nasty Gal T-shirt. A number of followers wrote back. I used to love your brand and now I dont. Why dont you stay out of politics and stick to running clothes? Im never buying Oiselle again.

We got a lot of hate, Bergesen says. But we decided that we are a feminist brand, and as such, we stand for certain things.

As another contentious presidential election nears, Bergesen has been brainstorming ideas to promote voting and speaking out for what matters. Oiselle is trying to put together a running relay race that goes from Atlanta to Washington, D.C., with voter awareness and registration as its mission. The race would pass historic landmarks and colleges.

Oiselle has already taken its pro-women message on the road this year. In February, the company attended the U.S. Olympic Marathon Trials in Atlanta. After the event, it hosted a fashion runway show that included shirts bearing the message: My body, my right. My body, my strength. My body, my freedom.

We can do a lot to be a positive force in the sport, Bergesen says.

The positivity can be seen in the way Oiselle celebrates the female running body. Fleshman recalled an advertising campaign where she and other runners completed a hard workout, and then posed for photos while flushed, blotchy, and with messy hair and sweat marks. In 2013 and 2014, Oiselle brought real athletes dressed in Oiselle gear to walk the runway in New York Fashion Week.

We had a hammer thrower on the runway, Fleshman says.

Odes to powerful women can be found everywhere in Oiselle headquarters. The company moved in June 2019 from a small office near Green Lake to a former military building in Magnuson Park with room for photo shoots, physical therapy, clothing design, fabrics and plenty of pro-female art. In the lunchroom hangs a drawing of Princess Leia with a gun and the words I Dont Need Rescuing. The Oiselle community bookshelf includes titles such as We Should All Be Feminists and Women and Power: A Manifesto.

Of course, feminism shares center stage with running at Oiselle. The walls are adorned with photos and news articles about Oiselle athletes and female runners. Bergesen makes running a regular part of her workday at Oiselle, and most of her 22 staff members do the same. She admits shes never been a morning person, so she usually runs in the late afternoon, finding time on the Burke-Gilman Trail the perfect way to turn off her brain.

Running has always been a savior for her. Back when she was in her early 20s and partying all the time, running gave her the strength to figure out what to do with her life. These days, running keeps her sane while running a business and standing up for what matters.