How three new companies are reinventing the shoe, the bicycle and the childrens play fort. 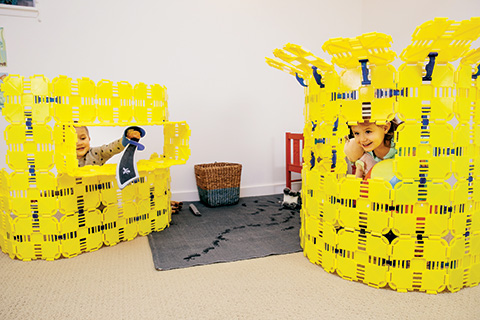 By putting new twists on old products using zippers to secure footwear, snap-together panels to build play forts, crowdsourcing to inform design three of the newest consumer-product companies in the Puget Sound region are creating a buzz around ideas that, in one sense, are hardly new, while, in another, are revolutionary.

They are also creating their own playbooks, borrowing from successful retailers, high-tech firms and online businesses to forge their own paths. Theyre building virtual teams and hiring people who possess the expertise they lack be it in distribution, marketing or manufacturing. And theyre tapping alternative funding sources for startup capital, including crowdfunding and business competitions.

These entrepreneurs are not interested in being one-hit wonders and are working on additional products for their markets. Like many other inventors and entrepreneurs, they share the gift of optimism, a penchant for risk taking and the patience required to continually refine their ideas and products.

AN OPEN-AND-SHUT CASE FOR ZIPPER SHOES Function and Fashion: Billy Footwear cofounder Billy Price, left, wants his line of zippered shoes
to be stylish enough to appeal to a wide audience.

Paralyzed from the chest down in 1996 after breaking his neck in a three-story fall, Billy Price longed to put his on shoes by himself. Its something he struggled with for years. He also wanted shoes more fashionable than the adaptive ones available on the market for people with spinal cord injuries.

A project manager for the Federal Aviation Administration who lives in Seattle, Price kept thinking about making stylish shoes that could be worn not just by those with disabilities, but also by young children, older people and anyone else who might have difficulty with conventional footwear.

Price found a partner to bring his vision to life in late 2011 when he became reacquainted with Darin Donaldson, a childhood friend who, as luck would have it, had attended Port Townsends Shoe School and gone through the process of creating a womans boot. Price already had a shoe idea in mind: a riff on a slip-on shoe that he modified. With more tinkering, the pair created a shoe that incorporates a zipper that goes around the front of the shoe, allowing the upper portion to flip open to one side so the wearer can essentially step into the shoe and then zip the top closed.

Taking advantage of connections Donaldson created while developing his unsuccessful womans boot, they quickly developed a prototype. It came back in very good quality and was functional, considering it was the first prototype we made, says Donaldson, a serial entrepreneur.

Price adds, When that prototype came in and we showed it to people, they would just shake their heads in disbelief because Darin just nailed it.

The self-funded shoe company has seven styles for sale on its Billy Footwear website billyfootwear.com as well as at amazon.com. The shoes are made in China. The company has applied for a patent on its distinctive design.

Price and Donaldson still work full time at other jobs and are raising money to create more designs, add more sizes and increase inventory. They hope to introduce a more supportive but still fashionable line for older adults. Billy Footwear has already hired several employees to handle logistics and sales.

The company recently raised more than $32,000 through a successful Kickstarter effort, which augments personal funding Price has provided. Donaldson says the company plans a private offering later this year. In the meantime, Billy Footwear is hitting the road with an eye toward having its zipper shoes available in stores next year.

Ive been in a wheelchair for half of my life, Price says, and half my life, I couldnt put on my own shoes. Now I can.

This, he says, is truly a shoe that appeals to everyone.

CULTIVATING A CHILD’S IMAGINATION IS A SNAP The former employee of Pacific Studio, a Seattle-based creator of exhibits, was working on a childrens exhibit for the new home of the Museum of History & Industry in 2012 when he saw how much fun children have building large structures. He knew kids would love a product that could allow them to build large forts and anything else their imaginations might conjure at home.

It took Graube three years and, by his count, 165 prototypes to arrive at a winning combination. He discarded six iterations of a huge Lincoln Logs-style product made of plywood; it cost too much and would have been dangerous. He then tried 60 versions of a smaller flat board made of extruded polypropylene, but it was too flimsy and didnt work well. He liked the size of the smaller board but knew it had to be constructed of a different material, so he progressed through nearly 100 more iterations of a smaller flat panel made of injection-molded plastic, which he 3D printed.

The end product is a flat piece of plastic about the size of a sheet of paper. Each panel snaps easily to the next and is locked in place either flat or at a variety of angles by a snap-on hinge. Kids use the hinges and plastic pieces to build igloos, airplanes, castles and other shapes. Graube recently received a utility patent for Fort Boards, which also is trademarked.

Like many inventors, Graube took a big risk, paying to build the final prototype without kid testing it because the upfront tooling costs forced him to jump-start production, which takes place in Indiana. Luckily, kids love it, Graube reports. Its intuitive, with only two interlocking parts, so its easy to learn.

One pack of Fort Boards panels and hinges costs $125. Graube, who lives in Seattle, has hired marketing and logistics help for his South Lake Union venture, which has been funded by friends, family and $20,000 from winning the grand prize in this years Microsoft Small Business Competition.

Seeing peoples creativity with them has been amazing, Graube says.

Like Price and Donaldson, Graube is already at work on his next product, another activity-related childrens product that works with the Fort Boards. He expects to start selling it late this year or early next.

PUTTING A CHARGE INTO BICYCLE DESIGN Charging Ahead: The Zeitgeist X City Bike, left, weighs less than 50 pounds
and incorporates a slim lithium battery that fits into the frame’s down tube.

Kartik ram approaches his startup as a student of business. Make that many businesses. He hopes to tap into the mindset of people who shop at Apple and Nordstrom. And then theres the Whole Foods shopper. And the Uber rider.

He wants to grab a page from Teslas playbook, copying the launch of the Roadster, which broke the electric car mold. Ultimately, he wants to be the Warby Parker of electric bikes, selling mostly online (at zeitgeistmobility.com) but not avoiding retail shops entirely. In time, in fact, he wouldnt mind selling his Zeitgeist bikes at REI.

Above all, Ram doesnt want the Zeitgeist to be something that sits in the garage as an afterthought.

We want to make it so you just dont leave home without it, he says.

The Zeitgeist X City Bike is a $4,000 carbon-fiber, motor-assisted bicycle designed in partnership with award-winning Danish designer Brian Hoehl. It weighs only 44 pounds. (A less expensive S version made of aluminum alloy weighs just over 50 pounds.)

Most electric bikes are clunky and heavy, saddled with large motors and with what Ram says are cheap parts. The Zeitgeist, manufactured in China, is lean and sleek and contemporary looking. It has a high-end Shimano drive train with a 500-watt Bafang motor that helps when climbing hills. The Tektro hydraulic disc brakes make stopping a sure thing, and the Alex 36-hole alloy rims and Schwalbe tires make the ride a smooth one. A 36-volt battery, hidden inside the frame, uses high-density lithium-ion technology similar to the batteries powering Teslas.

The bike can travel between 80 and 100 miles depending upon the conditions on a single charge, and Ram regularly beats cars traveling up Queen Anne hill, passing cars on his Zeitgeist as drivers struggle up the steep hill.

Zeitgeists co-founders are Ram, a veteran of Alibaba and Singtel (short for Singapore Telecommunications) and also managing partner of Fashion Fund, a crowdfunding platform for the fashion industry; and Gregg Stewart, formerly of AOL, Telegraph Media Group and others. They dont want to sell electric bikes to biking enthusiasts but to people who havent ridden a bicycle in years, who want a better travel option as city traffic creates gridlock, and who dont want to perspire too much during their commute.

Zeitgeist recently sold its bike through the Crowd Supply fundraising platform to test the market and as a way to get buyer feedback so it can then improve the design. Ram says the company is cash-flow positive and that it will take only a few hundred bike sales to make the company profitable. With subsequent designs, Ram and Stewart plan to apply for multiple design and utility patents.

Each bike is profitable on its own, and the first iteration, like Teslas Roadster, is designed to test the market and make sure the business model works. Were selling a better-quality bike and can get higher margins selling it direct, Ram says. We dont have to allocate 40 percent of our costs to paying for real estate.