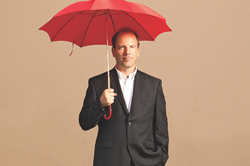 When Kevin Klock took over as president and CEO of Talking Rain Beverage Company in 2010 after the sudden departure of three of the companys top executives, the firm was having trouble taking advantage of a major shift in the beverage industry.

While health-oriented drinks like Vitamin Water were taking share from traditional sodas like Coca-Cola and Pepsi, Talking Rains entrants in the new category, Twist and Activwater, were making little headway.

Preston-based Talking Rain was doing a good job of developing new products but a poor job building and marketing those brands. Klock pulled together a team from marketing, sales and manufacturing to recommend changes. The team decided to focus efforts on Sparkling Ice, a naturally flavored, zero-calorie carbonated soft drink that had quietly built up a strong following in the Northwest during two decades.

The team developed new sales and marketing strategies. A big ice cube on each bottle and bright new colors reinforced the refreshing image. Sweetness, carbonation and other elements of the flavor profile were adjusted to assure consistency across the brands eight offerings.

We wanted to make it look and taste refreshing, and to make it so that every time you drink Sparkling Ice, no matter what flavor, you know what to expect, says Klock.

When Talking Rain pushed the retooled product out to its national distribution system, it had an unexpected response. Sales of Sparkling Ice, which had trudged along for years at a plateau of about $10 million annually, suddenly exploded. This year, says Klock, the company is on track to post revenues of well over $100 million.

Peoples lifestyles and attitudes are changing and they are looking for beverage alternatives at a time when we are presenting a great tasting, refreshing choice, says Klock. Today, the company is playing in the big leagues, successfully going head to head in national markets with the likes of Nestle Waters, Dr Pepper Snapple Group, Pepsi and Coca-Cola.

As more people become informed about what it takes to maintain a healthy lifestyle, says Leslie Chang, a senior vice president at Chase Commercial Banking in Seattle, who tracks trends in the soft drink industry, there will continue to be a long-term trend away from traditional carbonated soft drinks that contain heavy doses of fructose.

Beverage-Digest.com notes that per capita consumption of traditional carbonated soft drinks (CSDs) in the United States fell to 714 eight-ounce servings in 2011, down from 728 in 2010 and the lowest it has been since 1987. Winning over the business is a category called liquid refreshment beverages (LRBs), which include drinks like Sparkling Ice and Coca-Colas Vitamin Water.

Klock attributes Talking Rains success in tapping into the new trend to a new focus on collaboration. All groups are in it together to develop the business plan and establish objectives, he says. But another major reason the market has been receptive to Talking Rain products, he says, has been the companys heavy involvement in community events such as city marathons, firefighter fundraisers and school festivals across the country.

The 25-year-old company now sponsors 250 events a year. All [Talking Rain] employees, their children and friends are involved in the community, says Klock. Its in the DNA of the company.

In the past year alone, employees flew to Indiana for the Indianapolis Race for the Cure, a breast cancer awareness fundraiser. They zipped to the sugary beaches of Siesta Key, Florida, for the Crystal Classic master sand sculpture competition that benefited sea turtle research. They went to the Atlantic coast to support a marathon in Fort Lauderdale and the Orange Bowl in Miami. They stayed closer to home for Portlands Starlight Parade and many events in Seattle, including Seafair and the Beat the Bridge race to benefit the Juvenile Diabetes Research Foundation.

Twenty-one years ago, Talking Rain sponsored the Susan G. Komen Foundations first race. Around the same time, Nina Morrison joined Talking Rain. Now the vice president of community and customer relations, Morrison says that back then, the company was committed to mostly regional community involvement. But when Hurricane Katrina breached the levees in New Orleans in 2005, Morrison immediately contacted World Vision in Federal Way. Bottled water was trucked out to church organizations in Louisiana and Mississippi, then handed out to people in need.

Morrison, a former elementary school teacher, says Talking Rains culture of giving is a huge part of why she has stayed with the firm so many years. I love to give back and work with not-for-profits, and Talking Rain supports that, she notes. Thats the most important thing that keeps me here.

Chanelle Pike, co-owner of Riverside Tavern in Fall City, a popular haunt of Talking Rain employees, has served regulars who drive or bike over from Talking Rain.

Everyone who comes in for lunch, even the president, they all seem to treat each other equally, says Pike. If I could tolerate an office job, Id apply there.

Expansion is in the works at Talking Rains Preston facility, about 20 miles east of Seattle. The company has more than doubled its staffto 168since the beginning of 2011, and at press time it had 17 positions open. But with lots of companies competing for market share and many of them slashing prices to get attention, Klock knows it wont always be smooth sailing.

Were too successful not to have knockoffs [of Sparkling Ice], he says.

Indeed, the soft drink business is a volatile one, with more and more players seeking shelf space in a crowded field. Seattles own Jones Soda and Dry Soda are among those contenders, but theyll be hard-pressed to match Talking Rains overnight success with Sparkling Ice. Last April, SymphonyIRI Group, a market research company, declared Sparkling Ice a rising star, prompting one industry insider to gush: Its safe to say Talking Rain has a powerful thunderstorm in their portfolio.