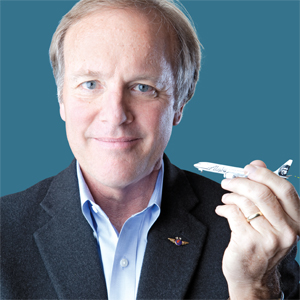 When the aviation world was imploding in 2008 with stratospheric fuel prices and plummeting passenger demand, Alaska Air Group Inc. CEO Bill Ayer had some sage advice for navigating the storm and reversing his companys losses: Dont buy things you cant afford. Dont borrow money you cant pay back. Dont agree to things you dont understand. And, finally, if it doesnt seem right, it probably isnt. He predicted those guiding principles would serve the company well in the future. He was right. 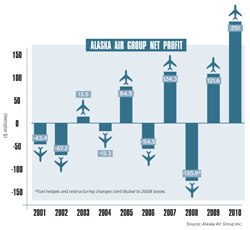 While the aviation industry is still struggling to stay above the clouds, the Seattle-based parent company of Alaska Airlines and Horizon Air is soaring. It rang in the New Year by posting record profits for 2010 of $251.1 millionthe highest single-year gain in the companys history, more than double what it earned in 2009 and light-years from its 2008 loss of $135.9 million.

The 79-year-old airline has proven that bigger doesnt mean better. And being a loner in a world of married couples doesnt make you an outcast. It uses its size, independence and maturity to shine in an industry that has lost its luster. Alaska is one of the most consistently profitable airlines in the U.S. And they havent become arrogant about that, says Leeham Co. aviation analyst Scott Hamilton. Their secret has been to remain on the leading edge of technology. They have smartly adapted to the changing competitive environment.

The company has been profitable 32 of the past 38 years (excluding special charges), now earns top billing in on-time performance (up from last five years ago) and remains one of only two legacy carriers (the other is American) to avoid bankruptcy. Its better-than-expected 2010 earnings werent the only thing impressing analysts and shareholders. The company also ordered $1.3 billion worth of next-generation Boeing 737 jets, granted $72 million in bonuses for employees, said it would recall its remaining furloughed pilots by April 2012 and rebranded Horizon with Alaskas livery and logo. Patience is not one of our virtues, Ayer says from his expansive office overlooking Angle Lake in SeaTac. You need to keep moving.

Alaskas 56-year-old chief attributes the carriers good health to a company-wide transformation that began in 2003 and continues today. The company is cutting costs by creating fuel-hedging programs and adding fuel-efficient airplanes to its fleet; motivating employees by adopting cash-incentive programs; increasing revenues by entering new markets and ditching unpopular routes; and improving on-time performance by using new operating systems. You control what you can control and dont worry too much about the other issues, Ayer explains.

With added pressure from its low-cost, low-fare competitors, such as Southwest and JetBlue, Alaska increased its focus on keeping its costs down and reducing fares. About five years ago, Alaska also lowered the number of fares to make it less confusing for customers, began offering one-way fares only (instead of round-trip) and did away with the Saturday-night stay-over requirement.

Since 2004, the company has cut about 2,100 jobs, negotiated new labor contracts and outsourced baggage-handling services.

Despite pushing 80, Alaska is as spry today as the pioneering young bush pilots who created the airline in 1932 when they flew a single, three-seat Stinson floatplane between Anchorage and Bristol Bay. The carrier has grown up to be the eighth-largest in the United States, with 117 airplanes and 430 flights a day to more than 61 cities in America, Mexico and Canada. Alaska and Horizon carry more than 23 million customers a year.

Widely recognized by the Eskimo painted on the tail of its aircraft (symbolizing its Alaska roots), the airline had built up a Gold Coast reputation over the years for its premier service (think hot meals served with silverware and china) and a 19-year streak of profits (19731991). Airline deregulation in 1979 was the springboard to Alaskas growth during the 1980s, and it kept low-frills, low-cost competitors at bay throughout the 90s by adjusting routes, flight frequency and fleet to better meet demand. But the unpredictability of the post-9/11 years, with soaring oil prices and a disastrous financial meltdown, put the airlineand the entire industryto its most critical test. The last decade has been the most challenging for commercial aviation, says Joe Sprague, Alaskas vice president of marketing. A lot of airlines were fearful of flat-out extinction.

Ayer admits that using bankruptcy to help solve their problems crossed his mind a few years ago, but the idea was quickly dismissed. We arent just going to throw up our hands, Ayer notes. We needed to make changes, but we werent going to do it the way everyone else has. Bankruptcy is not a strategy, nor is hope.

Perhaps the darkest period in the carriers history came on Jan. 31, 2000, when Flight 261en route from Puerto Vallarta, Mexico, to Seattle through San Franciscocrashed into the Pacific Ocean off the coast of California. All 88 people on board the MD-83 jet were killed.

A National Transportation Safety Board investigation determined the cause as the mechanical failure of a jackscrew-and-nut assembly that controlled the planes horizontal stabilizer. The airline, which accepted legal responsibility for the crash, subsequently abandoned use of the MD-80 series airliners, and converted to an all-Boeing 737 fleet, with its sister carrier using Bombardiers. The airline also created a vice president of safety position. In addition, it participates in all Federal Aviation Administration sponsored safety reporting programs and has a quality assurance program in each operating division, monitored by an independent internal evaluation process.

Alaska now maintains one of the youngest fleets of any United States carrier. In January, the company announced $1.3 billion in firm orders for 13 Boeing 737-900ERs and two 737-800 airplanes. The 737-900s, to be used on longer-haul and high-traffic West Coast routes, will be delivered in 2013 and 2014. Alaska Airlines president Brad Tilden says that, depending on the ultimate configuration, the larger 737-900ER will have between 21 and 27 seats more than the airlines existing 737-800 aircraft.

With the new aircraft coming on board, Ayer says, Alaska could grow at a rate of 8 to 9 percent this year and then 3 to 6 percent annually for many years, as long as the economy and fuel prices remain stable. Alaska is cautiously entering new marketsincluding the East Coast, Mexico and Hawaiithat are underserved by competitors. We had two choices: Do we want to continue to exist? And, if we want to exist, do we want to grow? Sprague says. There was a recognition that if we didnt take strong, deliberate steps, our survival would be at stake.

In the competitive aviation game, being small and maintaining its entrepreneurial culture is Alaska Airs biggest advantage. The company has mastered being in the right place at the right time: It can adjust its schedules quickly to match capacity with demand.

For example: Within weeks after Mexicana Airlines suspended operations in August 2010, Alaska announced it would double its capacity between Los Angeles and Mexico City and Guadalajara. It also started new service to Guadalajara from San Jose and Sacramento, Calif. One week after American Airlines said it would suspend daily non-stops from Austin, Texas, to San Jose, Calif., Alaska made its own announcement that it would fill the gap. And shortly after Aloha Airlines and ATA went out of business in 2008, Alaska took their place by launching service to Hawaii from the San Francisco Bay area. In a move many viewed as a preemptive strike against rival Allegiant Air, Alaska began service from Bellingham, Wash., to Hawaii on Jan. 7. Months earlier, Allegiant had been rumored to begin the same service. When an opportunity presents itself, we can move quickly, Sprague says.

Those network changes, especially to sunny destinations, have helped to diversify Alaskas revenue base and balance its passenger traffic flow. Historically, weve been a seasonal airline, says Andrew Harrison, Alaskas vice president of planning and revenue management. We made a significant amount of our profits in the summer and gave too much of that back in the winter and soft-shoulder seasons. The Hawaii market, which Alaska started serving in 2007, now makes up about 16 percent of the companys available seat miles, with more than 115 flights per week.

The companys success has not gone unnoticed. Aviation Week named Alaska the 2010 top-performing legacy carrier, despite being the smallest of the United States network carriers. The report noted that being nimble is paying off for Alaska because it isnt burdened by an oversized infrastructure. For the past three years, J.D. Power and Associates has ranked Alaska highest in customer satisfaction among traditional network carriers. In January, airline data research firm FlightStats, a company that provides airport and flight tracking information, ranked Alaska Airlines as the top on-time performer of 2010 among major carriers in North America. Their strategy is to increase frequencies and its working, says Seattle travel industry analyst Steve Danishek. 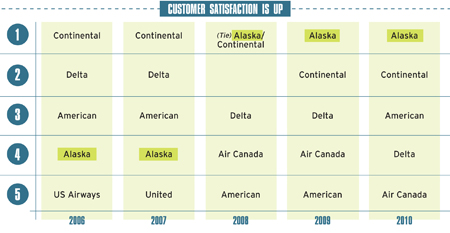 Those ratings were a welcome relief from a last-place ranking the airline had in 2006. It was about that time aviation analyst Hamilton stopped flying the airline for an 18-month stretch because of consistently poor service. He remembers when his flight from Seattle to San Francisco was canceled, as well as the replacement flight, and the third flight left late. That was the straw that broke the camels back, he recalls. But the airline gradually won his loyalty again and he remains a frequent flyer.

Alaska Air has since adopted a new operating system using electronic boards and a scorecard system at its Sea-Tac hub to coordinate the turnaround tasks of dozens of workers from the time the airplanes pull up to the gates to the time they take off. This isnt rocket science, Ayer says. If you dont fully identify the problems, youre not likely to solve them.

Alaskas cost-cutting strategies are not always popular. Last summer, the company started charging $20 for each of a passengers first three checked bags. But to cushion the blow, Alaska offers a guarantee that if luggage is not at baggage claim within 20 minutes after the flight parks at the gate, customers can choose 2,000 miles through the companys mileage plan or $20 off a future flight. Despite the fees, Alaskas customer base has remained loyal, says Seattle-based travel analyst Danishek. They [passengers] might moan about the fees, but its hard to peel them off of Alaska.

Earlier this year, Air Transport World magazine named Alaska winner of the 2011 Airline Technology Leadership Award. The magazine noted that the airline, which also won the award in 2003, has been a leader in operational efficiency and environmentally friendly technology. In the early 90s, Alaska Air pioneered the development of Required Navigation Performance, which helps aircraft fly consistent and controlled approach and departure paths. Alaska is currently working with the FAA to adopt the technology at Sea-Tac. The magazine also commended Alaskas patented Airport of the Future, which eliminated traditional ticket counters and reduced customer check-in times by as much as 90 percent. Alaska was the first United States airline to book flights and sell tickets over the internet and the first to offer web check-in.

With collective perseverance, Alaska has achieved many of the benchmarks in its 2010 strategic plan, including exceeding the 10 percent return-on-invested-capital goal. Ayer attributes the companys success to the dedicated efforts of our 12,000 people. The big picture, he says, is all about people and making sure we give equal attention to each of our major stakeholders [employees, customers, investors].

A 28-year aviation veteran, Ayer is the first to recognize that Alaska Air is not completely out of the woods yet. The economy is still recovering at a snails pace, unemployment remains high and oil prices keep airline executives up at night. You dont want to get complacent, Ayer says. We know the challenges of this industry are not over, but weve made great progress and the future has never looked brighter.